Palace: Robredo has no authority to see classified info as ICAD co-chair 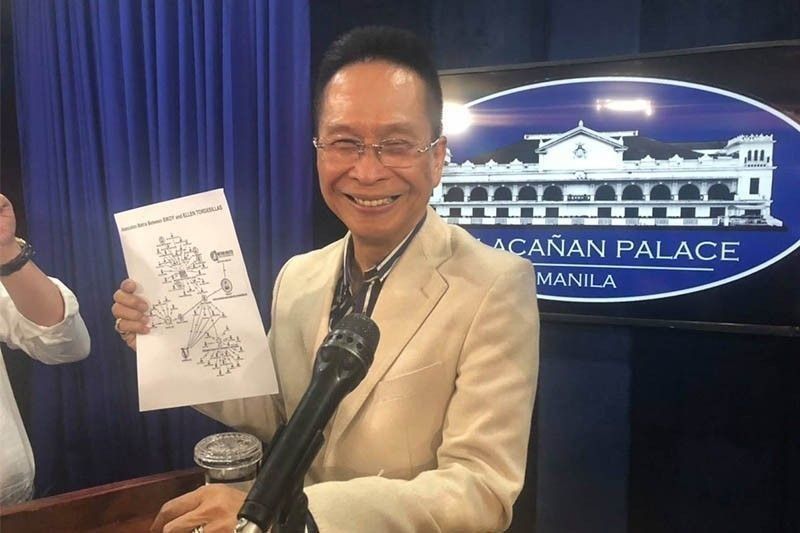 MANILA, Philippines — Vice President Leni Robredo may be co-chair of the Inter-Agency Committee on Anti-Illegal Drugs but that does not give her access to classified documents, Malacañang said Sunday.

In a radio interview, presidential spokesperson Salvador Panelo insisted that access to documents with classified information is not within the scope of Robredo's authority.

"There are things that even us, members of the Cabinet, are not allowed to look into. These are classified information. Only the NICA (National Intelligence Coordinating Agency) director, secretary of national defense can because they handle security," he said in a radio interview.

Robredo has asked the Philippine Drug Enforcement Agency for information on its list of high-value targets, a request that PDEA Director General Aaron Aquino said in in an interview that he disagrees with.

"We don’t agree to that because in the first place, she’s just a chairman of one committee. It is beyond her mandate to request for whatever list that I think has no purpose," Aquino, originally the lone chair of ICAD, said in a TV5 interview.

Citing Executive Order 15 creating the ICAD, Robredo said on her radio show on Sunday that among the functions of the ICAD is to "ensure the effective conduct of anti-illegal drug operations and arrest of high-value drug personalities down to the street-level peddlers and users."

She said it would be difficult to do this without the proper data.

She said, though, that that it is up to the member-agencies of the ICAD if they want to cooperate and that she would not force them to do so.

"If I say clean slate, it should be within the scope of the authority… Since she has started seeking access to all documents, including classified documents, and then she started inviting people rejected by the president, I’m not saying she is treading, she might be treading on dangerous grounds," Panelo said.

He said Robredo should be cautious about people giving her advice, saying some of the suggestions may be harmful to the country.

Panelo said Duterte has the duty to ensure that all his officials are performing their functions within the limits set by the law.

"The Constitution vests to the president all the powers of the executive, and all executive officials act under his control. Not only is it within the president's discretion, but it is his constitutional duty not only to enforce all the laws but to ensure that all his alter egos, including a co-chairperson of the Inter-Agency Committee on Anti-Illegal Drugs, are performing their respective functions within the scope and ambit of the law," the Palace spokesman said.

"Any appointment made by the appointing authority must be exercised strictly in accord with law and never diametrically opposed to the interest and security of the State," he added.

Panelo also disputed claims that Duterte's statement validates the suspicion that Robredo's appointment was a trap and clips the vice president's authority.

"Such speculations are unfounded as they are unproductive as well. The President is merely reminding VP Leni of the imperatives as well as the limits of her appointment lest she transgresses it," he added.

He said revealing State secrets to foreigners and welcoming those who "have trampled the country’s sovereignty" would be damaging to the welfare of the Filipino people. He said such act is a crime punishable by perpetual special disqualification from office, among other penalties.

"The President precisely made that statement predicated on Vice President Leni’s demanding access to all documents inclusive of classified data related to the government’s program on the illegal drug trade including its funding as well as inviting even UN (United Nations) personalities who have described the country as a murderous country and who have called for the arrest of (President Duterte)," Panelo said in a statement.

"Even the prosecutor of the rejected Rome Statute ICC (International Criminal Court) that has no jurisdiction over the country has been welcomed by the anti-illegal drug czar. She may not realize it but she could be treading on dangerous grounds. It could be an overreach of the granted authority hence the reminder," he added.

It is unclear when Robredo supposedly welcomed ICC chief prosecutor Fatou Bensouda, but the vice president has said she would prefer that the country to first try to solve its problems internally before inviting international investigators to come in.

"I think it is only fair to the agencies involved that I talk to them directly about it before deciding what to do next," she said on her first week as ICAD co-chair when asked if she would support an international probe of the drug war.

Earlier this year, the Philippines walked out of the Rome Statute, the treaty that created the ICC, in response to the tribunal's decision to conduct a preliminary examination on Duterte's crackdown on illegal drugs. Officials claim the ICC no longer has jurisdiction over the Philippines but the tribunal insisted that the Philippines' withdrawal would not affect its obligation to cooperate with the probe.

2019-11-16
AtinitoAdmin
Previous A crime of opportunity: Why some shoppers steal at self-checkout
Next Why Nova Scotia could be in the path of a future tsunami