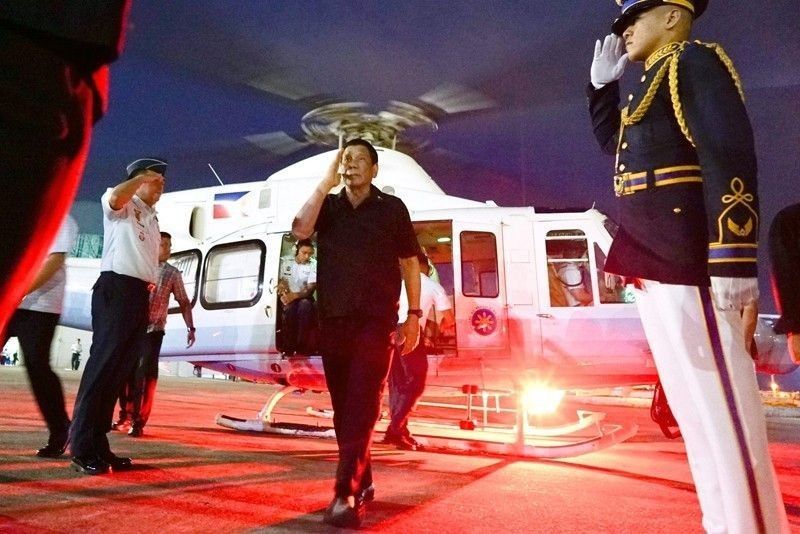 President Rodrigo Duterte left on a private jet for Busan, where he will attend the 30th Commemorative Summit, the biggest international conference to be hosted by the South Korean government under President Moon Jae-in.

“The closure of a media outlet over a personal whim and political vendetta has no place in a free, democratic and just society,” the senator said in a statement.

“Clearly, the President’s attacks on Rappler and Inquirer, and recently, his renewed threats of blocking ABS-CBN’s franchise, are part of his regime’s blatant crackdown, broader propaganda, and misinformation against media outlets, opposition leaders and organizations who criticize and challenge his crooked and brutal policies.”

ABS-CBN's franchise is set to expire on March 30, 2020, after which its broadcast services will cease operation.

Duterte earlier this week said he is determined not to grant the renewal of ABS-CBN's 25-year legal franchise.

"Ang inyong franchise mag-end next year. If you are expecting na ma-renew 'yan, I'm sorry. You're out. I will see to it that you're out," the president said in a Tuesday speech.

De Lima said the president had every legal means to address his grievances against ABS-CBN but still opted to take the authoritarian route, comparing Duterte to the late ousted dictator Ferdinand Marcos.

(Duterte is using his power and the government’s resources to suppress individuals, groups, and organizations which he detests or those who don’t bend to his will or personal or political agenda.)

“Duterte has repeatedly lambasted ABS-CBN for not being of service to him. But the truth is: ABS-CBN has 65 years of public service to the Filipino people, including fighting a dictator. Meanwhile, Duterte has three years of failed Presidency; he is someone who just became famous worldwide because of his incompetence, violence and false bravado.”

De Lima recalled that Duterte accused ABS-CBN of “biased coverage” that portrayed him in a bad light during the 2016 presidential elections, as well as his December 2017 proposal that he would make amends with the media company if it promotes the president’s federalism plan.

Last year, the president said he disapproves of the renewal of the media company’s franchise but would not meddle in renewal talks.

“Now, ABS-CBN, their franchise is due for renewal… But I will never also intervene. But if I had my way, I will not give it back to you,” Duterte said in August 2018.

De Lima urged lawmakers to not turn a blind eye against the actions of the president, which she described as being the accomplice of a dictator in the making.

(Let’s consider the wider implications of our decisions on our institutions, especially if a media station that assists in the daily lives of millions of Filipinos is suddenly closed just because of the vengeance of one selfish, repressive, and greedy man.)

Speaker Alan Peter Cayetano, an administration ally, earlier said the House of Representatives will not tackle any legislation on the franchise renewal for the rest of the year.

The National Union of Journalists also asked Congress to act independently on the ABS-CBN franchise renewal issue and consider the thousands of employees whose livelihood would be affected.

“Between 10,000 to 11,000 who depend on the Philippines’ largest television network and its subsidiaries/sister companies including ABS-CBN.com, dzMM, TFC, Star Records, to name a few, for their bread and butter, will immediately lose their jobs or will indirectly be dislocated once its franchise is denied,” NUJP said in a Friday statement.

“The National Union of Journalists of the Philippines urges the legislature to uphold its independence and pass the franchise renewal of ABS-CBN.”

International watchdogs Human Rights Watch and the Committee to Protect Journalists also criticized the president for weaponizing the law and cracking down on the democratic media institution.

“If you are expecting it to be renewed, I’m sorry. You’re out." ~ Philippines President #Duterte tells ABS-CBN, the country’s largest and most influential broadcast network. https://t.co/DQ6jxrc0H9#PressFreedompic.twitter.com/MVJ4TY30u3

2019-12-06
AtinitoAdmin
Previous Get ready for the most active meteor shower of the year
Next Personal reflections on the Polytechnique massacre, 30 years on