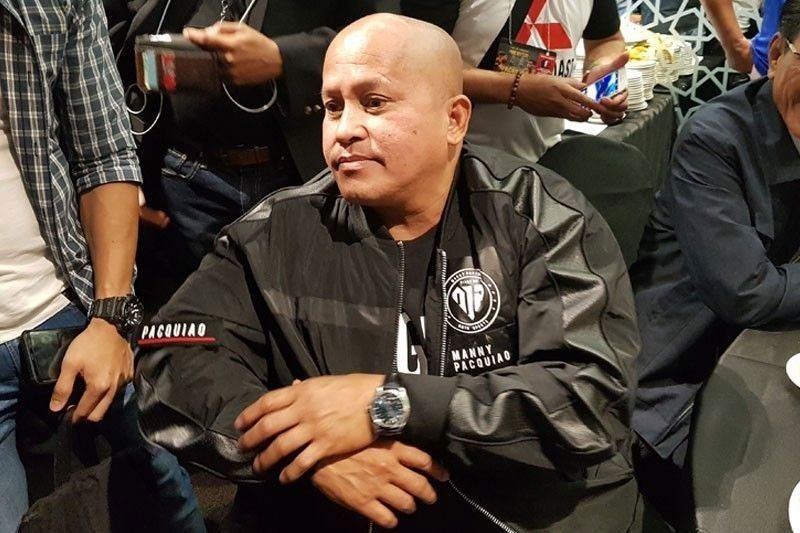 In this file photo, Dela Rosa is in the entourage of Sen. Manny Pacquiao, a multi-division boxing champion.

MANILA, Philippines — Sen. Ronald "Bato"
dela Rosa on Wednesday confirmed that the United States has canceled his visa, a possibility that had been raised by a provision in the US budget law for 2020 banning detained Sen. Leila De Lima's jailers from America.

The US Senate has also passed a resolution invoking the Global Magnitsky Act and calling on US President Donald Trump to impose sanctions on Philippine officials involved in the detention of De Lima and and in alleged extrajudicial killings in the
conduct of the government's crackdown against illegal drugs.

A simple resolution does not have the force of law.

"Yes. They officially answered my official query," Dela Rosa said, according to a report from radio
dzBB.

The government has denied that De Lima's detention on drug charges is wrongful or illegal and that her case is being heard in court. The Palace has said the US senators were misinformed about De Lima's case.

The Palace in December announced that US Senators Dick Durbin and Patrick Leahy, who had filed the resolution and whom the president's spokesperson described as "imperious, uninformed and gullible American legislators", would be banned from the Philippines.

"If they will enforce this provision in the US budget, then we will be compelled (to require) all Americans entering this country to secure a visa," presidential spokesperson Salvador Panelo also said.

'Duterte US visit to show independent foreign policy is real'

Dela Rosa said he
was willing to accompany President Rodrigo Duterte if he
decides to accept the invitation of US President Donald Trump to attend a special summit with other ASEAN leader.

The senator said accepting Trump's invitation would show the world that the Duterte administration's so-called independent foreign policy is real.

"The more friends the better. He is being invited by a Republican US president not by those gullible Democrat US senators who knew nothing about the real situation in the (Philippines)," he said.

Dela Rosa was chief of the Philippine National Police when Duterte launched his campaign against illegal drugs upon assuming office in June 2016.

Last year, US senators filed a resolution calling on Trump to implement sanctions provided for in the Magnitsky law.

De Lima earlier said the enforcement of the Magnitsky Act would cover members of state security forces and
"other Philippine government officials responsible for human rights violations specifically within the context of Duterte's drug war.

This law also allows freezing and forfeiture of the involved officials' US assets, properties and bank accounts. — Patricia Lourdes Viray