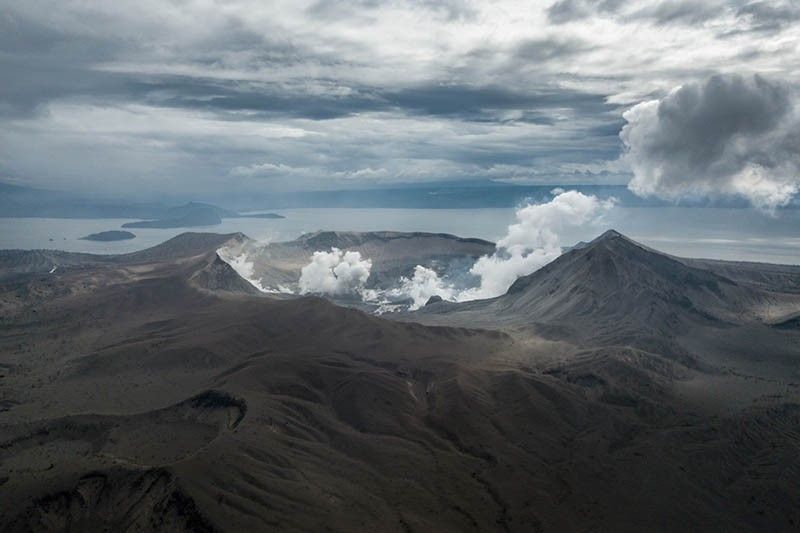 An aerial view shows the Taal volcano on January 17, 2020. The threat of the Philippines’ Taal volcano unleashing a potentially catastrophic eruption remains high, authorities warned on January 16, saying it was showing dangerous signs despite a “lull” in spewing ash.

MANILA, Philippines — Weaker explosions were observed on the surface of Taal Volcano in Batangas Thursday but a potentially catastrophic eruption remains a possibility, state volcanologists said.

In its 5 p.m. update, the Philippine Institute of Volcanology and Seismology said five “discrete weak explosions” were recorded by the Taal Volcano network.

“Since 8 a.m. this morning, Taal Volcano’s activity has been generally characterized by weak emission of steam-laden plumes 800 meters high from the main crater that drifted to the general southwest,” Phivolcs said.

Alert level 4 remains hoisted over the volcano, which means that hazardous explosive eruption is still possible within hours to days.

Phivolcs stressed that despite weaker explosion on Taal’s surface, there is still continuous volcanic activity underground.

A total of 653 volcanic earthquakes were recorded since Sunday afternoon when Taal began erupting after more than 40 years of sleep. Of these, 174 were felt with intensities ranging from Intensity I (scarcely perceptible) to V (strong).

“This signifies continuous magmatic intrusion beneath the Taal edifice, which may lead to further eruptive activity,” the agency said.

The eruption of Taal has affected 22,472 families or 96,061 persons in the provinces of Batangas, Cavite, Laguna and Quezon. Over 16,000 are seeking temporary shelter in evacuation centers.