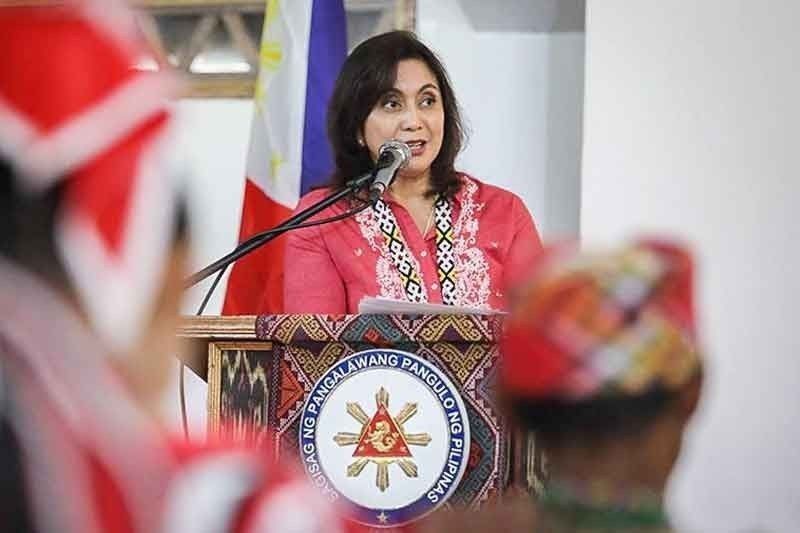 MANILA, Philippines — Vice President Leni Robredo agreed with Ferdinand "Bongbong" Marcos Jr.'s notion that textbooks should be revised—but only to further highlight the atrocities committed by the latter's family.

Related Stories
Robredo hits Marcos: Between the two of us, I’m not a robber
Bongbong wants textbooks about Marcos years ‘fixed’
Revealing documentary on Imelda Marcos to premiere at CCP
Robredo to no longer keep mum on ‘false accusations’ against her

(It's kind of funny that this is what he proposed because if there's anything that needs to be changed, maybe there's a need to inculcate in each Filipino what kind of evil was brought to us in their dictatorship.)

This was in response to claims by Bongbong that the Marcos family was treated unfairly by the history books, which, he said, were full of propaganda forwarded by their political rivals to besmirch their reputation.

(They put it in textbooks of students that the Marcoses stole so and so and that they did this and that.)

In a separate interview with GMA's "Unang Hirit" that same morning, Robredo also said that Marcos should not run if he isn't willing to accept the results of the election.

(For me anyone has the right to run. But whoever runs has to accept the result of the election.)

Earlier that week, a youth group echoed the sentiment that textbooks should be revised but not to "cleanse" Marcos of his sins.

“Marcos is obviously looking after his own skin for his future political ambitions. But he is unlike us. We seek nothing less than the objective truth to move past the lies and gimmickry peddled by the ruling elite,” said Samahan ng Progresibong Kabataan (SPARK) spokesperson John Lazaro in a statement sent to Philstar.com.

“Marcos’ sins against the people and the youth are unforgivable. Up to this day, the Education Act of 1982 which gave capitalist-educators a free-hand to raise tuition fees as they please is the sole reason for millions who dropped out of school due to their inability to pay for an education,” he added.

The two decades that constituted Marcos' dictatorship were marked by wanton human rights violations as 34,000 were tortured and 3,240 killed, none of which have been acknowledged by the Marcos family who still insist that they were victims of historical revisionism despite a signed republic act explicitly acknowledging the mass human rights violations that occurred under the Marcos regime.

“For Bongbong to hide behind the dismissed corruption cases before the Sandiganbayan is lame,” Lazaro pointed out.

“The dismissal of cases does not indicate innocence but the deficient preparation by the legal counsels of the government”.

NewsLab: 31 Years of Amnesia: Stories on the Myths that Made Marcos