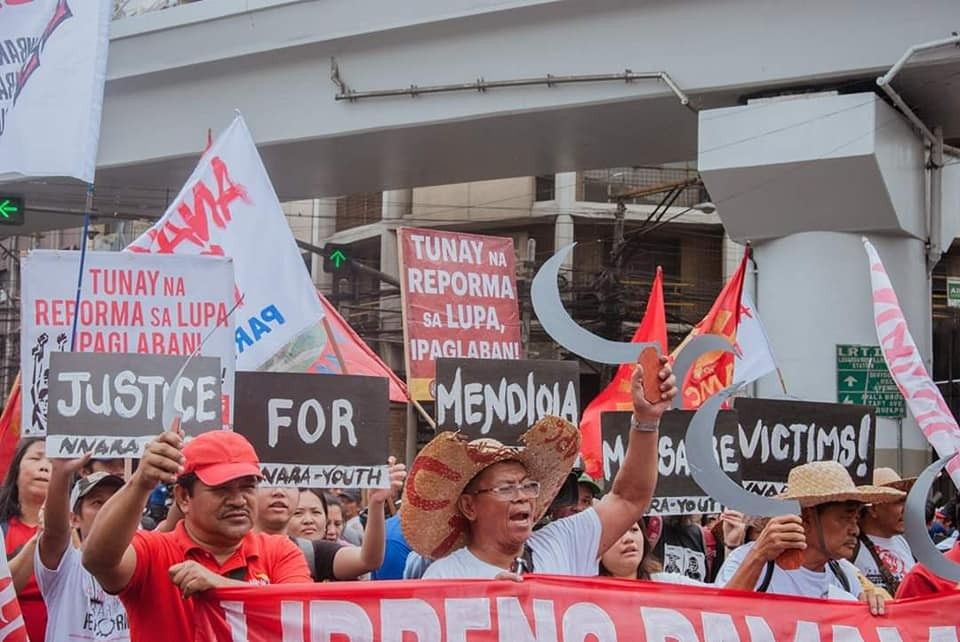 The photo shows the 32nd commemoration of the Mendiola Massacre on Jan. 22, 2019.

MANILA, Philippines — Six presidential administrations and more than 30 years later, farmers and agricultural workers continue to commemorate the Mendiola Massacre with the same call to distribute land to the tillers.

On Jan. 22, 1987, a crowd of an estimated 10,000 farmers trooped to Mendiola Street in Manila to demand genuine agrarian reform, which is the rallying call toward democracy icon and first post-EDSA President Corazon Aquino.

Instead, 13 of the farmers lost their lives in a hail of bullets fired by government troops, while scores of protesters sustained gunshot wounds and other injuries.

A day later, Aquino ordered the creation of the Citizens' Mendiola Commission to investigate the incident.

The commission would later recommend the filing of criminal charges against all the armed police and military officers under civil disturbance control duties during the peasant-led protest march.

However, the Citizens' Mendiola Commission ended up disbanding without taking any action on the Mendiola Massacre.

The lack of any real state initiative prompted the families of victims and survivors to file their own class suit against certain military and police officers, as well as the government, for P6.5 million worth in damages.

The Regional Trial Court in Manila, however, dismissed the suit in a contentious 1988 ruling, upheld five years later by the Supreme Court citing the government's immunity from suit.

Since then, the lack of justice and accountability for the massacre, as well as persisting landlessness and agrarian unrest in the countryside, continue to bring generations of farmers to Mendiola year-round.

“After three decades and six presidents, we are still in the same position. Our farmers are killed either by bullets or anti-poor policies by the government," Unyon ng mga Manggagawa sa Agrikultura (UMA) Chairperson Antonio Flores said in a statement.

"This is why agri-workers protesting today are not only calling for justice to the thousands of farmers killed in the last decades. But we are strongly condemning the prevailing injustice of being held captive to the government's lack of a genuine agrarian reform program and anti-farmer policies."

Agri groups say that the longtime concentration of land ownership among big landlords and agribusinesses tie landless farmers and agricultural workers in a cycle of poverty, unable to control production or benefit from their labor and produce.

Data from the Philippine Statistics Authority also show that farmers are among the sectors that consistently posted the highest poverty incidence between 2006 and 2015.

Aside from elusive land reform and controversial government policies like the Rice Tariffication Law, farmers have also denounced human rights violations suffered by the peasant sector.