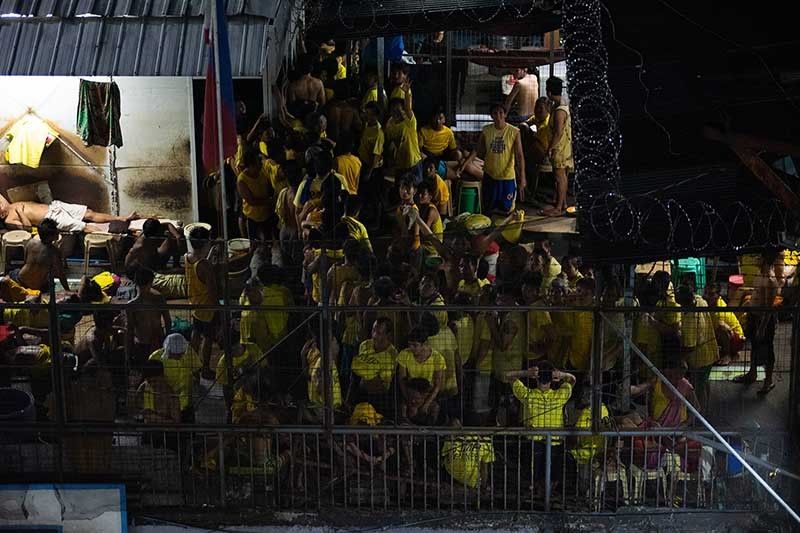 This photo taken on March 27, 2020 shows prison inmates at the crowded courtyard of the Quezon City jail in Manila. UN rights chief Michelle Bachelet has urged countries to protect people held in overcrowded prisons and other enclosed facilities by releasing vulnerable detainees, saying COVID-19 “risks rampaging through such institutions”.

In an open letter to the task force, the senator pointed out that persons deprived of liberty do not have the luxury to regularly wash hands, wear face masks, or practice social distancing — a new term for people staying away from crowds and being at least six feet away from each other.

De Lima also noted that the United Nations Commissioner on Human Rights and the World Health Organizations urged governments “not to forget those behind bars.”

UNHRC Commissioner Michelle Bachelet was quoted as saying that “authorities should examine ways to release those particularly vulnerable to COVID-19, among them older detainees and those who are sick, as well as low-risk offenders.”

De Lima urged the IATF to follow the lead of Iranian and Indonesian governments that released more than 85,000 prisoners and 30,000 prisoners, respectively, as infected cases rise in their countries.

She said that the IATF may consider PDLs with following qualifications for possible release:

De Lima added that those who may be allowed early release should meet the qualifications under the Enrile doctrine which held “that the detainee will not be a flight risk or a danger to the community; and that there exist special, humanitarian and compelling circumstances.”

Rights group Karapatan also launched an online campaign with the hashtags #SetThemFree and #FreePoliticalPrisonersPH calling for the release of political prisoners in the country.

Karapatan Secretary General Cristina Palabay, in a statement, said many of political prisoners “are already advanced in age and suffering from debilitating illnesses.”

“The campaign also raises alarm over high congestion rates, lack of clean water, sanitation and adequate medical services and facilities in the country’s prisons. We fear that these conditions—which make measures such as physical distancing impossible and make our detention facilities fertile ground for deadly disease outbreaks like the COVID-19 pandemic,” she added.

The group said that according to their data, there are 609 political prisoners across the country, as of March 28. One hundred of them are women, 47 are elderly while 63 suffer from serious ailments.

De Lima, who is formerly Justice secretary, also noted that Bureau of Corrections and Bureau of Jail Management and Penology data for 2019 and 2020 showed that facilities have congestion rate of 349% and 441%, respectively.

"With the number of arrests and detentions piling up, even during the Enhanced Community Quarantine, and persons, including BuCor and BJMP officials and personnel, presumably still going in and out of our jails and prisons on a regular basis, it is only a matter of time before COVID-19 infects our PDLs," De Lima said.

2020-03-31
AtinitoAdmin
Share
Previous CHR: Arresting the hungry does not address their problems
Next Office of Civil Defense to consolidate, track COVID-19 donations