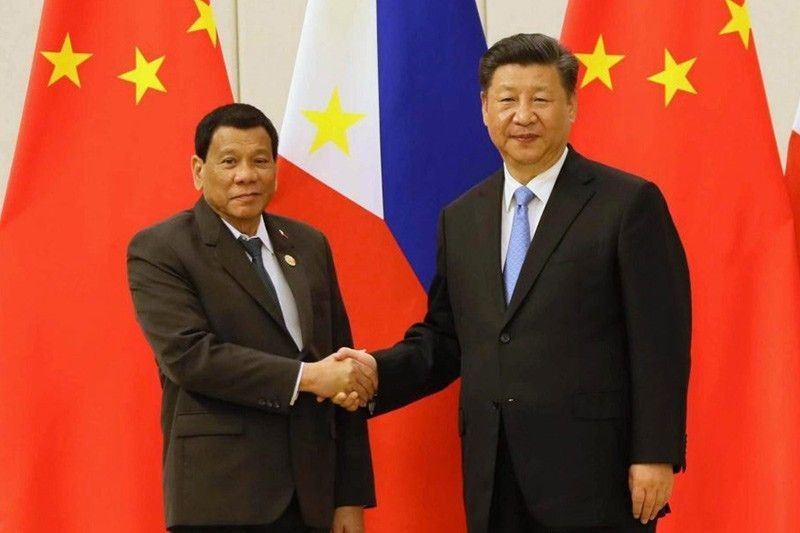 In this April 10, 2018 photo, President Rodrigo Duterte and People’s Republic of China President Xi Jinping pose for a photo following a successful bilateral meeting at the Boao State Guesthouse.

In a handwritten release on Wednesday morning, the detained senator also hit the president's response to the virus, saying that he was caught unprepared by the virus.

Related Stories
LIVE updates: COVID-19 in the Philippines and the Luzon quarantine

"He tried to downplay the contagion and failed to initiate any semblance of preparation early on," De Lima said.

During his public address to the nation late Monday night, the chief executive made it a point to praise China's president, both for China's help to the Philippines on the COVID-19 pandemic and for his supposedly decisive response to the new pathogen when the outbreak started in China's Hubei province.

(Hubei was locked down, but now they're open again, the airport is open. Because when Xi Jinping said stay home for 59 days, not a person went out. What an irony. It came from them, but they were the first to open, and now they're okay.)

"[Duterte] bought into the China propaganda—hook, line, and sinker. By the time he appeared to be moving finally, we were already playing catch up. No amount of propaganda will change that,” De Lima said in her release.

“We are already making great strides towards extending help to our countrymen and preventing the spread of COVID-19. But instead of taking control of these efforts and focusing on ensuring that everything is implemented properly, Mr. Duterte is still finding time for Chinese propaganda."

The president has said in a separate public address that he was one of the first world leaders to impose a lockdown in order to halt the spread of the virus.

Prior to the lockdown—officially called an enhanced community quarantine—there had been calls for a travel ban on arrivals from mainland China . A proposal that the president and his top allies said was an overreaction and xenophopic.

When the travel ban did come, it initially only covered travelers from Wuhan City and Hubei province, the epicenter of the new pathogen at the time.

READ: U.S. casts doubt on 'intentionally incomplete' Chinese coronavirus figures | Philippines early to adopt travel ban, lockdown but not first to do so

Though Beijing's press releases boast of an overall victory against the new pathogen, the international community has cast doubt on its transparency in its handling of the situation, with some states implying that China has reported fake numbers to cover up its actual progress in fighting the virus.

US Senator Ben Sasse (R-Nebraska) for instance has called Beijing's numbers "garbage propaganda," saying in a statement, "This much is painfully obvious: The Chinese Communist Party has lied, is lying, and will continue to lie about coronavirus to protect the regime."

As Beijing continues to hand the Duterte administration assistance in its fight against COVID-19, a news agency in China reported the launch of two research stations on Fiery Cross (Kagitingan) and Subi Reefs in Spratly Islands, both Philippine-claimed territories in the West Philippine Sea.

During Duterte's 2016 presidential campaign, he promised to take a jet ski all the way to Scarborough Shoal to plant the Philippine flag and assert the country’s ownership over the disputed seas.

He later expressed surprise that people took that claim seriously, even outrightly refusing to assert the Permanent Court of Arbitration's ruling favoring Philippines and its rights over the disputed territory.

President Duterte has not been shy about his diplomatic preference for China; in one visit to the country, he was quoted as saying that "there are three of us against the world – China, Philippines and Russia. It's the only way.”

"In order to pursue our COVID-19 measures to complete success, we need to stop being tools to Chinese propaganda," De Lima said.

As of this writing, the virus has afflicted 5,223 Filipinos according to the Health Department's latest count on Tuesday evening.