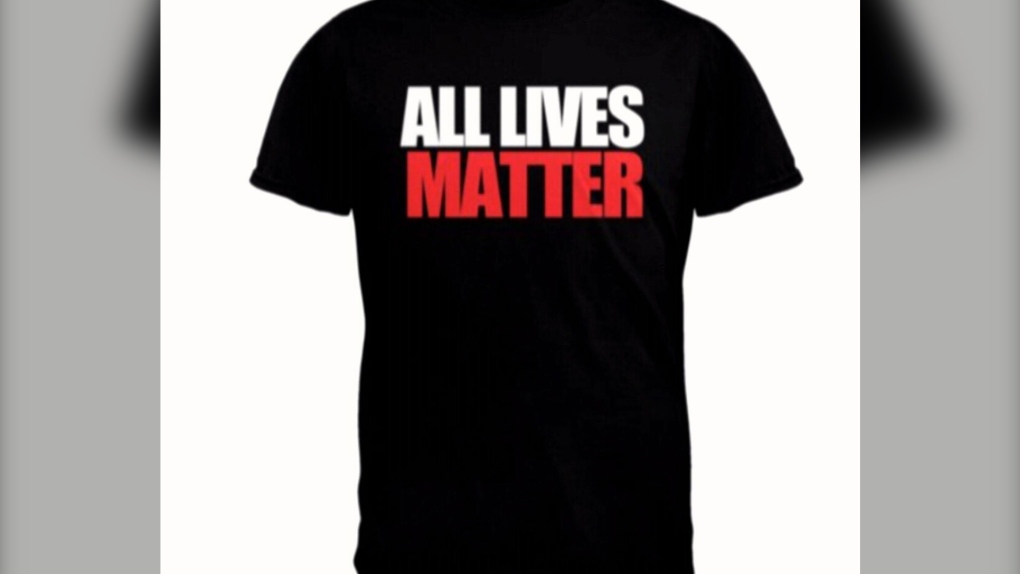 TORONTO — A T-shirt displaying an “All Lives Matter” slogan on Walmart Canada’s website appears to have been taken down after backlash this week.

Twitter erupted with criticism against the company on Tuesday after users tweeted links to a listing of a shirt that displayed the phrase. It was being sold through a third-party seller on Walmart’s website, and was one of many products bearing the slogan “All Lives Matter.”

The slogan has been widely criticized for its racist implications, as it was popularized only after the “Black Lives Matter” movement began.

By Thursday, the listing was no longer active, and the link led only to Walmart Canada’s front page.

In addition, searching the phrase “all lives matter” in the website’s search bar now redirects users to a search for “Black Lives Matter.”

CTVNews.ca has reached out to Walmart Canada for comment.

On Tuesday, a Walmart Canada spokesperson told CTVNews.ca by email that the company was investigating the product, which was sold by a third party on the company’s online platform.

“At Walmart Canada, we stand against any form of racism or discrimination,” the spokesperson said Tuesday. “We promote listening, seeking to understand and embracing individual differences.”

Consumer watchdog group SumOfUs, which is composed of people around the world who aim to hold corporations accountable, believe that their efforts to flood the company with complaints ultimately led to the products being taken down.

Angus Wong, Campaign Manager for the group, told CTVNews.ca over email that after they read CTV’s original story about the shirts on Wednesday, they contacted their Canadian members.

“Within a few hours, we emailed 170,000 SumOfUs members in Canada,” he said. “We asked our members to email, call, tweet, and write on Walmart’s Facebook wall, demanding they take down All Lives Matter merchandise.”

He said that more than 5,000 of their members directly emailed Walmart’s corporate centre.

“This morning when I woke up, the All Lives Matter T-shirts were gone,” he said. “We think the thousands of messages from SumOfUs members contributed to Walmart taking down the products.”

Wong said that “‘All Lives Matter’ has become code and a dog whistle for those who oppose calls for racial justice and an end to police brutality.

“Walmart, like many big brands, put out a statement saying “Without question, Black Lives Matter.” But selling and profiting from the sale of anti-Black Lives Matter merchandise is total hypocrisy, so we had to speak up.”

Walmart Canada’s spokesperson said Tuesday that they were aware of numerous products that were variations on the “lives matter” theme.

Walmart Canada has removed listings by third-party sellers due to backlash before, including last December, when a shirt that appeared to show Santa Claus doing cocaine produced an uproar.

PSE seeks to get more SMEs to go public