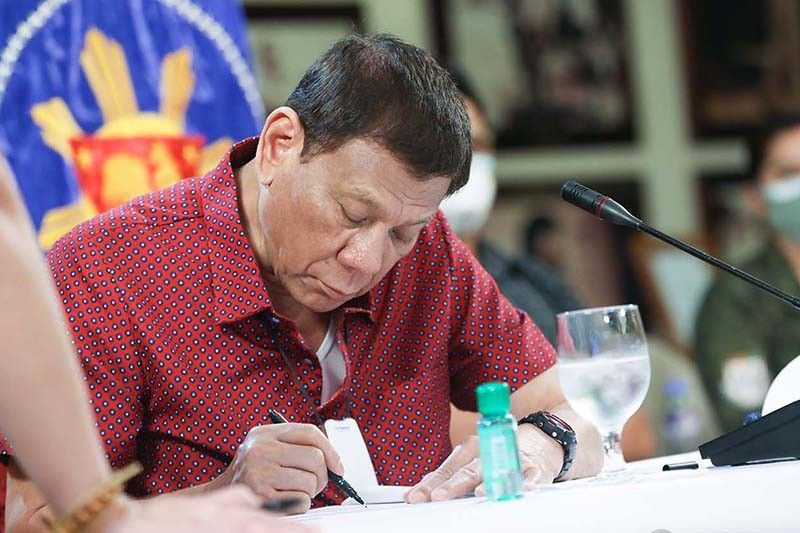 President Rodrigo Roa Duterte reviews a document while holding a meeting with members of the Inter-Agency Task Force on the Emerging Infectious Diseases (IATF-EID) at the Malago Clubhouse in Malacañang on May 28, 2020.

MANILA, Philippines — A former law dean challenged the Bayanihan law and other presidential issuances related to COVID-19 measures before the Supreme Court.

Lawyer Jaime Ibañez on Tuesday filed a Petition for Certiorari and Prohibition and asked the tribunal to nullify Republic Act 11469 or the Bayanihan to Heal as One Act for being “partly unconstitutional in so far as the imposition in the country of the Enhanced Community Quarantine.”

He also asked the SC to prohibit the Inter-Agency Task Force on the Management of Emerging Infectious Diseases from enforcing its guidelines on community quarantine, as these are supposedly an “invalid delegation of legislative authority” and in violation of due process and equal protection clauses.

Approved in a special session last May 23, the Bayanihan Act granted the president authority for three months to realign funds to distribute emergency cash aid to the poor and those who were left jobless by the pandemic, and impose stiffer penalties for local officials refusing to comply with emergency measures.

But the petitioner asserted that the law is unconstitutional as it granted the president “legislative authority to exercise power other than what is necessary and proper to carry out the declared national policy,” supposedly shown with the use of the phrase “for other purposes.”

The phrase “for other purposes” in the Bayanihan law constitutes “undue delegation of power,” said Ibañez.

He also said that the IATF has no power to define the law on quarantine, as the power to make laws cannot be delegated.

The IATF, composed of several government agencies, issues guidelines for the country amid the COVID-19 pandemic and during the period of public health emergency.

"The IATF has no power to define the law on quarantine, set its own parameters and restrictions and to even invent the Modified Enhanced Community [Quarantine] according to its own bizarre definition, which all amount to an exercise of grave abuse of discretion," the petition read.

He also said that there is no declared congressional policy that would authorize a chief executive to restrict people’s movement. The IATF is also accused of violating equal protection and due process clauses when it isolated persons who were not infected with COVID-19.

“Locking or putting individuals who are not COVID-19 patients and the like, and placing them to quarantine area with unlimited period, is a complete disregard of the safeguards embodied in the bill of rights,” the petitioner further read.

Lawmakers are currently deliberating to extend the Bayanihan law for another three months.

2020-06-01
AtinitoAdmin
Share
Previous CHR calls on DOTr to lift ‘discriminatory’ train ban on senior citizens
Next Family says ‘back and forth’ between N.S., Ottawa over shooting probe ‘unreal’