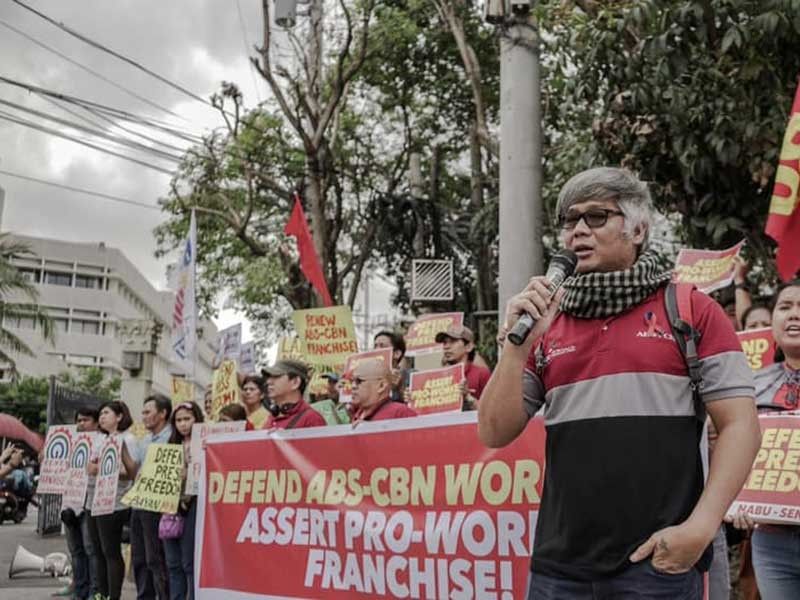 Members and supporters of the National Alliance of Broadcast Unions hold a program outside the Senate on February 24, 2020.

MANILA, Philippines — Faced with alleged labor violations, ABS-CBN Corp said that it is ready to re-examine its employee benefits and the disparity in worker regularization, the company said at a hearing Tuesday.

At Tuesday afternoon’s continuation of the House hearing on the legislative franchise of ABS-CBN Corp., lawmakers and labor groups called for more equitable working conditions and labor policies in both ABS-CBN Corp. and the broadcast industry at large, pointing to the prevalent disproportion in workers' benefits and regularization.

Asked if the company is willing to introduce reforms in the absence of new laws, ABS-CBN Corp. CEO Carlo Katigbak said: "More than anything else, our people are the most responsible for the success of ABS-CBN. We at all times put their welfare ahead of everything and we are willing to review which positions in the company deserve to be regular and hopefully to gradually implement these changes over time."

"For those positions that cannot be regularized, our goal is to make sure that project employees and regular ones at some point in time have an identical set of benefits. That principle is what has given rise to the constant increase in the number of non-statutory benefits that we give to our employees," Katigbak added.

The company's alleged violations of labor laws are among the reasons raised by detractors on why the broadcast giant, which employs over 11,000 Filipinos, should not be given a new legislative franchise to operate.

According to Katigbak, 6,705 of its employees are regularized, while 2,208 project employees and independent contractors stood at 2,158.

Labor Undersecretary Ana Dione said that "there was never an instance" that having program employees or independent contractors was deemed illegal.

Sentro: Include pro-worker provisions in franchise

Labor group Sentro ng mga Nagkakaisa at Progresibong Manggagawa (Sentro) called for corporations to "protect in a better way the welfare of their workers and be a participant in their enterprise."

“While we welcome the idea of crafting a separate law, we are also talking about the welfare of workers at this moment. Our position is that while that is a possible proposal to explore further, at this situation, we would prefer that pro-worker provisions be included in this franchise,” said Benjamin Alvero of Sentro.

“The experience that we see in this case may be a launchpad for these broader and more institutionalized forms of protection. We would also like to reiterate that we are willing to work with all representatives interested to guarantee the welfare of workers in the broadcast industry,” he added.

Changes in all broadcast companies?

At Monday’s hearing, former employees of the company aired their grievances which included a lack of benefits as talent employees and illegal dismissals in 2010.

Generoso Villanueva Jr., president of the ABS-CBN Rank and File Union added in Filipino that: "There are so many problems in our industry, especially in our government broadcast station where contractualization is so prevalent. It would be nice for changes to happen in all broadcast networks."

For his part, Rep. Lawrence Fortun (Agusan del Norte 1st District) said that introducing such amendments would have to be done not just in ABS-CBN’s franchise but that of other media entities to protect their workers as well.

“We need to legislate more laws to protect workers in this industry, we are all together on that…what we need is to improve the working conditions in the industry and make sure they aren’t unjustly removed. Isn’t it not that when a company faces labor cases, the direction should be that of improving the policies of that company as far as labor is concerned instead of encouraging a situation where that company should shut down because of a few labor issues?” he said.

“Cases like this are not isolated as far as ABS-CBN is concerned. Other big companies with a lot of money face cases like this. I think DOLE would not encourage that they close. What DOLE wants is for you to fix your labor policies,” he added.

At the previous hearing Monday, Labor Undersecretary Dione said that the company "fully complied" with general labor standards as well as directives issued by the department.

Only one of 109 illegal dismissal cases involving the company remains unresolved, she said.

"I honestly feel that it is the more prudent direction of Congress to give you another franchise. But the realization also in these hearings is that there are things that need to improve in the industry, especially in the welfare of our workers," Fortun said.

In 2019, President Rodrigo Duterte vetoed a bill that would further regulate contractual labor, saying it was unfair to employers.

2020-06-29
AtinitoAdmin
Share
Previous Homeless man turned church caretaker may end up back on the street
Next Family with six PWD cards invited to House hearing, asked to cooperate with QC legal