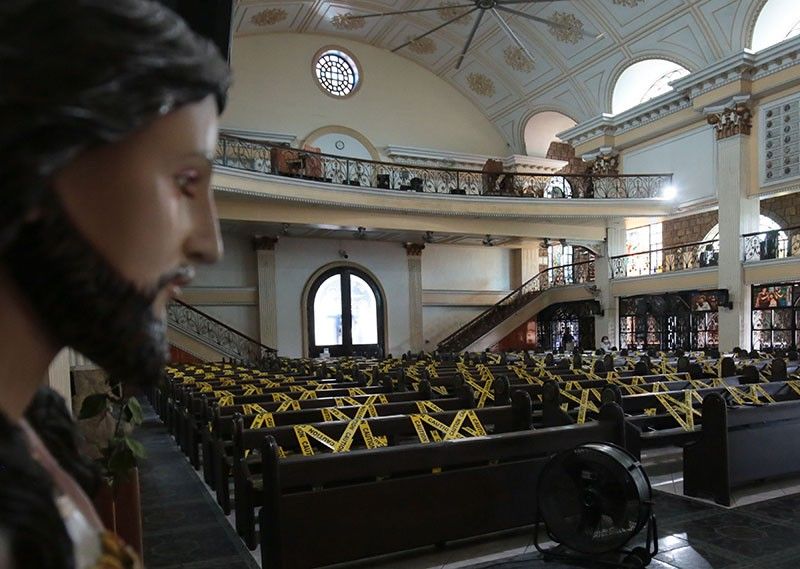 Markers separating church goers are in place on May 31, 2020 at St. Peter Parish Shrine in Commonwealth, Quezon City.

MANILA, Philippines — The government has allowed masses and other public gatherings in areas that have shifted to the most lenient modified general community quarantine or MGCQ.

Religious services and work conferences have been added to the list of mass gatherings permitted in MGCQ areas, Resolution No. 43 issued by the Inter-Agency Task Force (IATF) on the Management of Emerging Infectious Diseases showed.

However, only up to half of the capacity of venues may be filled up to ensure safe physical distancing.

"Mass gatherings such as but not limited to, movie screenings, concerts, sporting events, and other entertainment activities, religious services, and work conferences shall be allowed provided participants shall be limited to 50 percent of the seating or venue capacity," the resolution read.

Presidential spokesman Harry Roque said the IATF believes that social distancing can be observed if only half of a venue is filled up.

"These gatherings are allowed only in MGCQ areas… The rule is applicable to mass gatherings in general, not just to religious gatherings," Roque said at a press briefing Thursday.

Only Metro Manila, Central Luzon, Calabarzon, and Central Visayas regions, the cities of Baguio, Iloilo, Zamboanga and Davao, and the provinces of Pangasinan and Albay remain under general community quarantine. The rest of the country are now under MGCQ, the last quarantine scenario before the so-called "new normal."

Under IATF guidelines, religious gatherings are not really prohibited in GCQ areas although the number of persons allowed to join is too small, a limit that some sectors said, effectively barred the holding of worship services.

Only up to ten people may participate in religious gatherings in GCQ areas even if some religious groups have presented detailed proposals on implementing social distancing during masses.