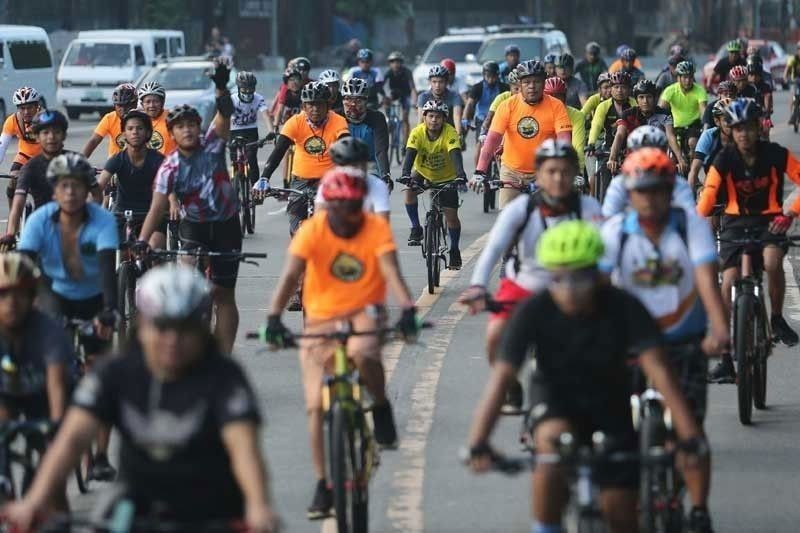 Despite pronouncements from the Metropolitan Manila Development Authority (MMDA) that it does not support pop-up bike lanes, cyclist group Bikers United Marshall, for one, have set up their own lanes bounded by makeshift cones out of orange bottles along Commonwealth Avenue in Quezon City since Monday.

MANILA, Philippines — A cyclists’ group set up bicycle lanes along a busy highway in Quezon City yesterday, hoping to prove to transport officials that bikers deserve a space – even one bounded by cones – during the new normal.

Despite pronouncements from the Metropolitan Manila Development Authority (MMDA) that it does not support pop-up bike lanes, cyclist group Bikers United Marshall, for one, have set up their own lanes bounded by makeshift cones out of orange bottles along Commonwealth Avenue in Quezon City since Monday.

For World Bicycle Day today, the group will set up the bike lanes again and give out reflector vests to cyclists going to work without protective gear.

Rodne Galicha, a volunteer for the group, said they face the risk of being ticketed for traffic violations when they set up the makeshift bike lanes.

For him, though, the group was not violating any traffic rule; in fact, they are only setting out to do the government’s job to give bikers’ protection.

“We will not stop until authorities realize that this is actually their job – to assure bikers that they are safe on the streets. We are actually just doing their jobs,” said Galicha, who was among 2018’s Ten Outstanding Young Men for his work on the environment.

MMDA spokesperson Celine Pialago yesterday said the group was not authorized to put up improvised bike lanes without proper coordination.

“Plastic bottles for bike lanes? That is prohibited and unsafe,” Pialago said.

Responding to the spokesperson, Galicha dared the MMDA official to join them in biking along Commonwealth Avenue with and without pop-up bike lanes so she could get a feel of the situation on the ground.

He maintained that without protected and elevated bike lanes being constructed during the quarantine, bikers should at least be given the makeshift space to feel safe on the road.

The group was willing to face possible charges for putting up the bike lanes, according to Galicha.

“We know sometimes that this is necessary to show them what is morally right and to remind them of their job,” he said.

Geane, another volunteer who opted to identify herself through her first name only, said the group counted 1,000 to 2,000 cyclists who have been using the makeshift bike lane along Commonwealth Avenue since Monday.

Under the first phase of the bike lane, cyclists may begin using the 4.21-kilometer lane from N. Domingo Street to Ortigas Avenue, which will pass through facilities and institutions in the city, like the San Juan Medical Center, San Juan City Hall, Greenhills Shopping Center and near Cardinal Santos Medical Center. Neil Jayson Servallos