How ‘real girl’ Johanna Garcia broke out of her toy kitchen

Girl, interrupted? You might say that about Johanna Garcia of food purveyor Real Girl, Toy Kitchen (who also happens to be one of the writers of this section).

Garcia used to work as the communications director of HSBC Philippines from 2007 to 2013, until the thought of starting up her own food business began to seem more appetizing than her corporate job.

Actually, Johanna’s “Real Girl” story begins in New York City, where she studied communications at Fordham University and did PR for a pharmaceutical company. “You either live on takeout, which is so unhealthy, or really expensive restaurants, which you can’t afford. So I learned how to cook there.”

Growing up she had also learned from her mom, whom Johanna describes as “an excellent cook,” and loves watching cooking shows to unwind. Her fave domestic goddesses are Ina Garten, Martha Stewart and Nigella Lawson — “The trifecta! One day I want to be the fourth! I really enjoy watching them.” 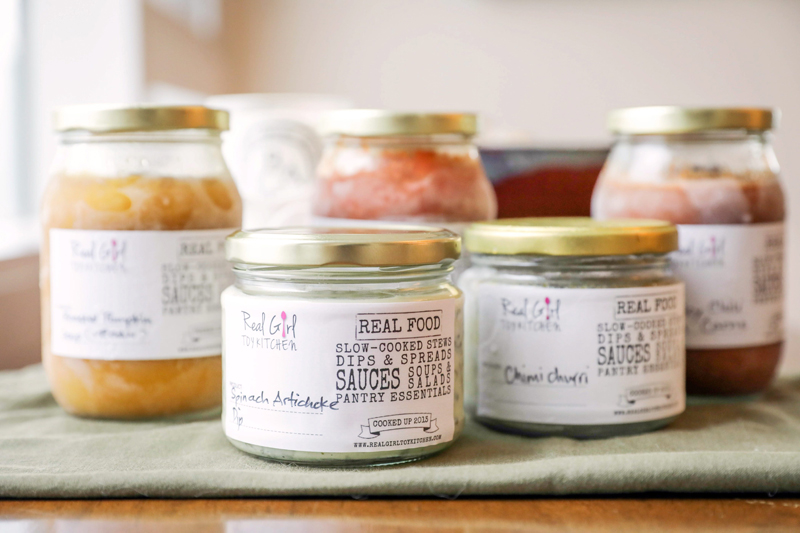 Stepping into a Marks & Spencer food emporium during a trip to London proved fortuitous: “I thought to myself, one day I’d love to do this. It’s just heat-and-eat food at every level in terms of budget, cooking expertise, every possible ethnicity. You have things you just boil, or microwave, or things you could turn into something fancy. So that was always a distant dream of mine.”

After 9/11 the “Real Girl” was interrupted for the first time. Johanna lost her job in NYC, which spurred her to go back home. “There were a lot of layoffs. I was there on an H1 visa; it was kind of hard to get renewed at that point.”

At home she rejoined the corporate world at HSBC, but another interruption was brewing: Johanna realized after a few years that she had become like one of those time-strapped people who came home from work wanting a good meal but were too tired to cook it.

“When you’re younger budget takeout is okay, but when you’re older, it sort of gets to you: the oils they use every day. So there were a lot of people willing to pay a little more, feeling they’ve got good-quality food on the table. They trust that the oil isn’t being reused, or it’s good-quality olive oil. It’s what they would feed their children, or their husbands or wives, or their guests. That’s kind of what sparked the idea.”

Initially she started with the building blocks of a pantry: chicken stock or pasta sauces that people could cook with. “Then I realized: a lot of Filipinos are too tired to even do that. They really just want to heat something up.” So she started her home-based enterprise in earnest. “At first I would do just recipes, and it was called ‘Real Girl, Toy Kitchen’ because that’s what it was: my kitchen now is a mansion compared to my previous one. My countertop was like a placemat’s worth of space. So it was just me saying, okay, we can make real food in a tiny kitchen. It was a tiny apartment, around 50 sqm. The kitchen was really a kitchenette. But I was just determined. I was complaining one time but my mom said, ‘One day you’re going to look back and realize you made some of the best meals of your life there.’”

First she focused on foods that froze very well: chili, pasta sauces — bottled foods you could stuff in your freezer and pull out. “After that, what grew organically from demand was the made-to-order stuff: the lasagna, roasted beef belly, the trays. That grew because there was a high demand.”

She only has one person helping her out in the kitchen, doing prep while she does the actual cooking. At present her bestsellers are sous-vide porchetta, roast beef and fresh pasta lasagna. “I like slow cooking,” Johanna admits.

We sampled a range of Real Girl, Toy Kitchen items and you really have to order her Cuban Picadillo; add a fried egg, plantains and rice and you have an incredible arroz a la Cubana, or just scarf it down with hot rice and call it great. Made to order: Lasagna Bolognese

Chili happens to be Johanna’s go-to comfort food, and she considers her version of it — Spicy Chili con Carne — her signature dish.

“I’m always going through cookbooks, the internet, and if I can't find a version out there that's to my taste, then that's normally what I make,” she says. “For chili I never found one out there that was strongly flavored enough, so I said, I'm going to make what I like.”

I love her velvety Roasted Pumpkin Soup with its subtle curry flavor, and also have a soft spot for the pasta sauces: Basil Pesto, Pomodoro and Mushroom, and Bolognese — all fresh, authentic-tasting, and made with first-class ingredients that more often than not are organic.

“I call myself ‘best-effort organic,’ Johanna admits. “I'm not 100-percent organic. And the Philippines doesn't really have a certification for organic, so I really just try. When it's available, I use organic herbs and vegetables, because that's plentiful; it's fairly easy to find organic mushrooms, for example. I use organic chicken. My soups are made with homemade organic chicken stock.”

Every dip, sauce and dish is made in batches small enough to be called artisanal, and Johanna has added a couple of bomb ice creams to her menu: You can see the little black dots of the vanilla bean in her made-from-scratch French Vanilla, and her Belgian Chocolate is gooey, rich and addictive as crack to this dark-chocolate lover.

Even Real Girl’s packaging is eco-friendly. “So many of my neighbors do these diet delivery things and they never know what to do with their containers. So I would sterilize and use them because I felt that they shouldn't be single-use. But I just didn't feel good about it. As I got rid of those I found this great brand called Eco Solutions. It's made from sugarcane but it's microwavable, freezer-safe, and you can put it in the oven, so I can even make lasagnas in there.” 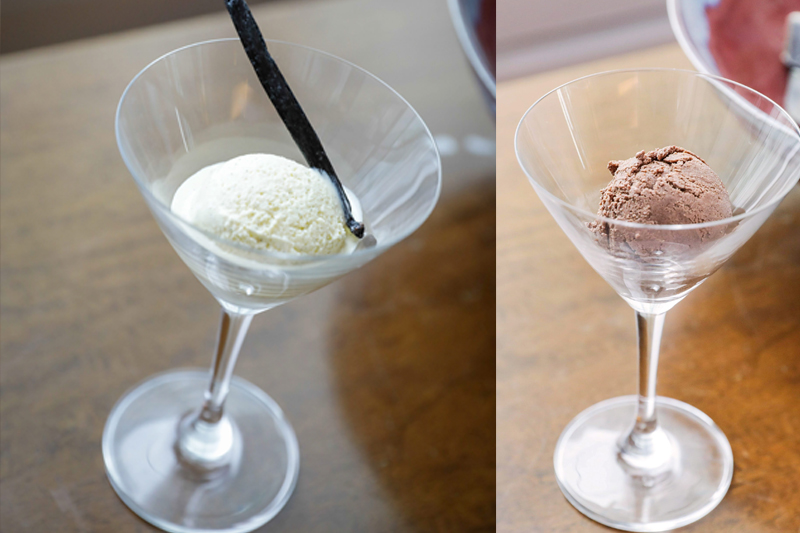 From home delivery to café

Real Girl, Toy Kitchen became such a viable business that Johanna turned her concept into an actual eatery.

“I recently opened a small cafe in Poblacion…for five minutes!” she laughs wryly. “I'd always wanted a small space, because I know I'm not really a restaurant cook. I don't have that kind of formal training or experience, so it's really just what I wanted — mostly takeout — maybe a couple of tables.”

Friends of hers had opened a wellness center called Holism in Poblacion, Makati, and would joke that Johanna would run the café they planned to open. After a few detours, she eventually did.

“When I saw the space it was tiny — it reminded me of my old apartment — but all of a sudden I just really wanted it. So I went home that night, and for some reason just kept, like, crafting fantasy menus in my head.” The next day she told the owner she was “very interested” in the space. “And we're all part of this group of healers that meet every week, so she just said, ‘I was looking at other people, but I would prefer to keep it in the family,’ so to speak. So yeah, it just fell in my lap. It just felt like the universe said, ‘Okay, that's your space.’ And it still feels that way despite all of this.”

Also called Real Girl, Toy Kitchen, the café was on a dry run for a couple of weeks and hadn’t officially opened before — boom! — the Real Girl was interrupted again. Lockdown was announced.

“Considering that my original business model was takeout and heat-and-eat, I don't think I fared as badly as other people,” Johanna says. “The other restaurants, I really feel for them, the ones who depend on customers coming in.”

Though her takeout and delivery orders jumped during the first few weeks of lockdown, halfway through her suppliers couldn’t supply her anymore, so she took a break. “The first month and a half didn't feel like curfew to me, except for not being able to walk my dog (an askal named Igor) in the village.”

When she reopens the café, she plans to pivot and focus more on takeout. “When I fully restock, I’ll probably start selling and delivering to Rockwell, the villages. Because I really do think most of us don’t want to go out.”

Like many home cooks she was making pizza and pasta dough during quarantine, and taking Zoom cooking classes on cuisines like Indian, because they’re less familiar to her. “They said, ‘Today, we're going to make paratha.’ I thought, piece of cake! Oh, my God, my paratha was like shoe leather. They said it would puff up, but I tried it four times; it never puffed up! So that was very humbling.

“But you know, it's always been an advocacy of mine to tell people: Cook! Cook! You can control the ingredients, everything. If it’s palpak, so what? We're not curing cancer. You're not killing anybody.”

Now she’s working on a seafood curry, and when I ask the Real Girl what her Dream Kitchen would be like, she says, “My dream kitchen wouldn’t be a kitchen; it would be an entire house. I would definitely have a gas oven, a grill, and a barbecue.”