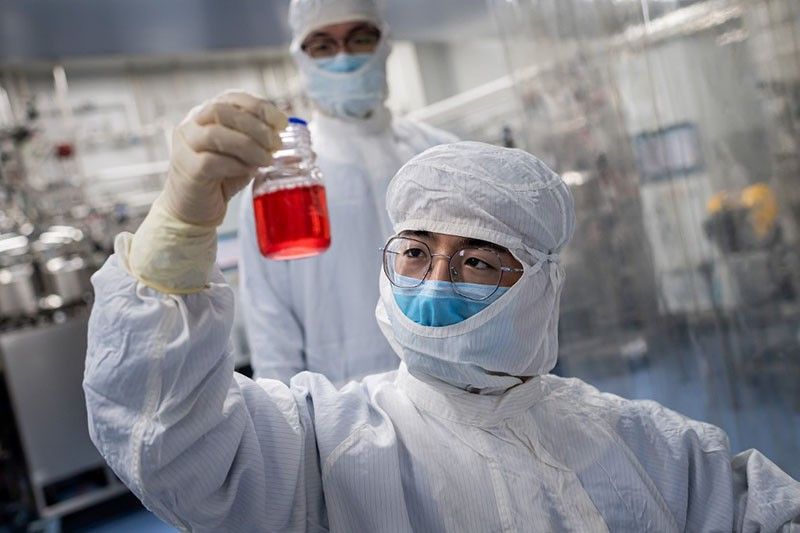 In this picture taken on April 29, 2020, an engineer looks at monkey kidney cells as he make a test on an experimental vaccine for the COVID-19 coronavirus inside the Cells Culture Room laboratory at the Sinovac Biotech facilities in Beijing. Sinovac Biotech, which is conducting one of the four clinical trials that have been authorised in China, has claimed great progress in its research and promising results among monkeys.

MANILA, Philippines —Science and Technology Secretary Fortunato Dela Peña on Wenesday said that the country may be conducting human trials for a coronavirus vaccine created by a Chinese company.

Dela Peña said in an ABS-CBN News report that the Philippines would likely be joining Sinovac Biotech in conducting Phase Three of their clinical trials for their COVID-19 vaccine.

“We see that Sinovac is ahead. They are using what is called a deactivated coronavirus…The vaccine is not yet available so we will be joining either Phase Two or Phase Three. Most likely Phase Three… which will require thousands of volunteers,” he said in Filipino. He added that these trials would likely take place in Septemeber, pending the readiness of the vaccines.

According to the US Food and Drug Administration, Phase Three trials involve "300 to 3,000 volunteers who have the disease or condition" and can last from one to four years.

The science and technology secretary added that volunteers for trials would have to be 18 to 55 years old.

Why join a human trial for a vaccine?

Dela Peña explained the benefits of joining human trials, saying it would ensure both the country’s prioritization and Food and Drug Administration (FDA) approval of the vaccine proves to be successful.

“For example, if we are not included in a clinical trial, such as the Oxford vaccine which is being reported to be very advanced, if this is introduced to the country, the FDA will still require us to undergo our own clinical trials. Because a new provision in our Universal Healthcare Act, which is probably a result of past lessons learnt from vaccines, added a Phase Four requirement,” he said in Filipino.

Phase Four requires the country to conduct its own trial of vaccines even if it is approved by the FDA abroad.

Dela Peña said that the conducting of simultaneous trials here could circumvent a delay of six to nine months.

He also highlighted the importance of the country having its own manufacturing capability for vaccines.

“What we’d like to happen before we enter an agreement with any [of the organizations and institutions approved by the IATF] is we’d like to require that they license a Filipino company to manufacture after the successful clinical trials,” he said in Filipino.

The Inter-Agency Task Force (IATF) on the Management of Emerging Infectious Diseases has given the go signal for the Philippines’ participation in at least five clinical trials for vaccines against the coronavirus disease.

Aside from Sinovac, the collaborating organizations include the Adimmune Corporation, the Academia Sinica, the Chinese Academy of Science – Guangzhou Institute of Biomedicine and Health and SinoPharm Group – Wuhan Institute of Biological Products and Beijing Institute.