A month before the lockdown I attended the launch of Deco Filipino: Art Deco Heritage of the Philippines, written by two colleagues in heritage, Ivan Man Dy and Dr. Gerard Lico. Philippine Art Deco is a great interest of mine, of course, but I wanted to attend because the event was held in one of the best examples of the pre-war style, the Rizal Memorial Coliseum.

The structure anchors one corner of the Rizal Memorial Sports Complex, which was completed in 1934 to host the Asian version of the Olympics. It has since hosted countless national and regional meets before the war and after its reconstruction from damage during the liberation of Manila in March of 1945. 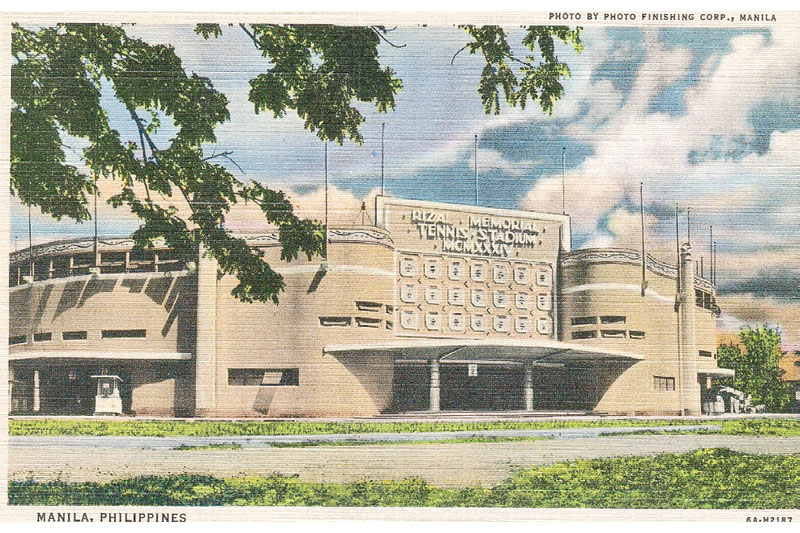 Unfortunately the complex has had its ups and downs. With limited budgets, the Philippine Sports Commission has had difficulty maintaining the site. The football stadium was renovated in the last few years due to the resurgence of the sport but the baseball and tennis facilities needed help. The Rizal Coliseum was the main indoor tennis facility until basketball took over in the 1960s for the MICAA and UAAP/NCAA games. Although I do remember that it was still used as a tennis venue in the 1970s as Manila was one leg of the professional tennis tour then.

A few years ago, the site was being eyed by a real estate developer who wanted to replace the sports complex with a mixed-use commercial development with a number of high-rise condominiums. The developer did communicate their intent to save the Art Deco facades of the buildings but then all the inner spaces would presumably be turned to commercial use. This met with public opprobrium of course, and after a few months the issue died down. Fortunately last year the coliseum got a boost of funding as it was needed for the staging of the 30th Southeast Asian Games last year. Dr. Lico, who is also a practicing architect, was put in charge of the conservation and renovation. Being well acquainted with the structure’s heritage and value, he was well positioned to take on the challenge. The coliseum was finished on time in four months and managed its share of the games’ requirements with flying colors. The gymnastics events were held here. Right after the lockdown, the government needed to find venues to fight COVID-19. National sports complexes including the Clark facilities and the Rizal Memorial stadia were suggested. The coliseum was the best option as it was a large enough venue, and it had functioning utilities that were essentially brand new, perfect to host this new function. Hospital specialist architect Dan Lichauco was called in to help retrofit the coliseum.

This fascinating story of how the coliseum was saved and repurposed is the subject of a new full-length documentary by Dr. Lico. The film Rizal Revival will be launched in a free online premiere on June 30. The film chronicles the story of the Rizal Memorial Coliseum from its origins as a 1930s Juan Arellano-designed facility to today’s adaptive re-use as a medical quarantine facility. The coliseum as COVID-19 quarantine area

Dr. Lico had circulated an early cut for review. Although I have not seen it, comments from friends in the architectural and conservation communities here and abroad have praised the film.

Patrick Flores, art critic and curator, says, “The documentary is a diligent account of the process involved in the revival of the Rizal Coliseum, as well as its lively historical life as a witness to sports, rock stars, urban life, and the current pandemic. To revive is to breathe life into something that has languished or has altogether broken down. … (it) tells the story of how it recovered the sui generis Art Deco structure from a dismal state and prepared it to be the site of the gymnastics events of the 2019 Southeast Asian Games. It is an inspiring story … of tight timelines, the passion for heritage, the consciousness of history, and the practical intelligence to get things done on time.”

A friend from Singapore, Prof. Lai Chee Kien, called the film, “A powerful documentary about the thoughtful restoration of a classic, with Passion, Persistence, and Professionalism.”

Architect Tina Bulaong of Escuela Taller de Filipinas and a professor at the UP offered, “I love how the film documents the comprehensiveness of the work that went into the redevelopment of the Rizal Memorial Coliseum. The film is very informative and at the same time evocative of the coliseum's significance. The project itself demonstrates how our old or historical monuments can be given a new lease on life. Due to public vigilance and effort of the conservation team, we have just proven that our heritage buildings can still be relevant to the present-day needs of the Filipinos.”

The documentary Rizal Revival should be of interest not only to architects, heritage advocates, and students, but also to anyone interested in how we can repurpose heritage for the new normal, also how we can conserve what we already have because they were well-designed and built in the first place. The film is relevant because we are losing our historic buildings at a maddening pace. A week ago, we lost the Capitol Theater, another Art Deco masterpiece. It is hoped that this documentary will bring a sharp focus on the issues of conservation and the future of our architecture and our cities.

Feedback is welcome. Please email the writer at paulo.alcazaren@gmail.com. For a sneak preview of the documentary. Please log on to https://tinyurl.com/RizalRevival-MainTrailer.