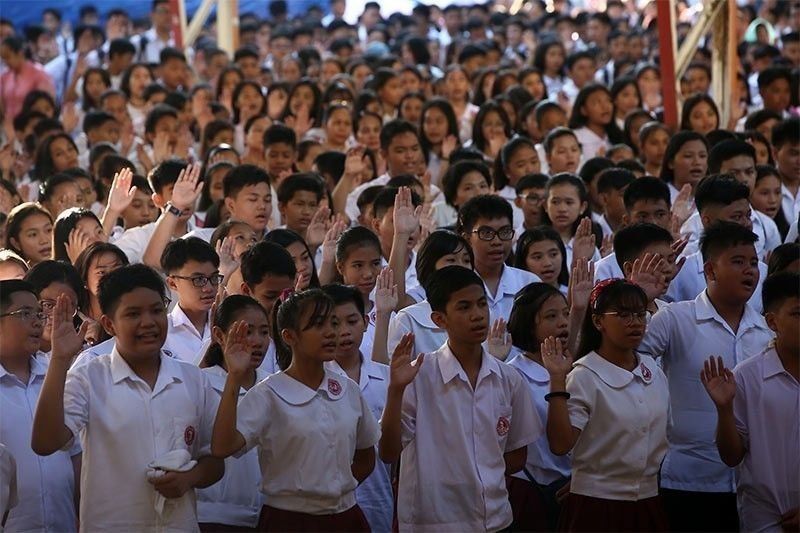 During a public hearing at the Senate committee on basic education chaired by Sen. Sherwin Gatchalian, Education Secretary Leonor Briones said 961,396 students have registered nationwide as of yesterday both for public and private schools.

MANILA, Philippines — A non-government organization Monday called on schools and universities across the country to address mounting reports on social media of alleged harassment at the hands of teachers and faculty members.

Non-profit Save the Children Philippines raised the alarm over the rising number of students reporting their experiences and reminded schools of their mandate "to effectively adopt and implement their respective child protection policies to protect children and youth in school from all forms of abuse, violence, exploitation, discrimination, and bullying."

A litany of allegations of abuse involving professors of different institutions was brought to light over the past week with many students—including those of Ateneo de Manila University, Miriam College High School, and St. Theresa's College—sharing their accounts on social media.

All three schools have acknowledged the reports and have vowed transparency and action but were also careful to highlight the need for due process.

“We are concerned that the cases posted in social media only show the tip of the iceberg as deprived and marginalized students may not have the voice and the platforms to express similar complaints,” said lawyer Alberto Muyot, Save the Children Philippines CEO.

"Students’ right to participation and to be heard appropriately, and be listened to by school authorities must be fulfilled at all times," he added.

The non-profit also pointed to Department of Education Order No. 40, or the DepEd Child Protection Policy, which was issued in 2012 and mandates all schools, both public and private, to develop a policy and guidelines to protect children from all forms of abuse, including mental violence, neglect or negligent treatment, maltreatment and exploitation, and sexual abuse, among others.

Muyot, a former undersecretary of the department and who authored the Department Order, said policies should integrate the right of the child to education and achieve the right progressively, and on the basis of equal opportunity.

“To encourage more students to speak up on cases of abuse and violence, school discipline must be administered in a manner consistent with the child’s human dignity, and in conformity with the [United Nations] Convention on the Rights of the Child,” he added.

Work, education or training-related sexual harassment is defined in Republic Act No. 7877 or the Anti-Sexual Harassment Act of 1995 as:

“…Committed by an employee, manager, supervisor, agent of the employer, teacher, instructor, professor, coach, trainor, or any other person who, having authority, influence or moral ascendancy over another in a work or training or education environment, demands, requests or otherwise requires any sexual favor from the other, regardless of whether the demand, request or requirement for submission is accepted by the object of said act.”

Republic Act No. 11313 or the Safe Spaces Act provides that the “failure of employers or school heads to implement their duties under the Safe Spaces Act (i.e. including setting of administrative penalties to violations of gender-based sexual harassment in the workplace)” merits a fine ranging from P5,000 to P10,000.

In a separate statement earlier Monday, Muyot also said that LGBT+ children and youth are deprived of their rights because of their sexual orientation and gender identity such as access to health services, education, and work opportunities.

This comes after a Pride March held by members of the LGBTQIA+ community in Mendiola, Manila on Friday saw police elements arresting 20 protesters holding a peaceful protest and observing social distancing.

Save the Children Philippines highlighted that young people "have the right to freely express their views, and adults have the obligation to listen and consider them, and to facilitate their participation in all matters affecting them."

“These vulnerabilities are even exacerbated by the COVID-19 pandemic as they face higher risks of physical and sexual violence, bullying, ridicule, stigma and social exclusion,” said Muyot. — Franco Luna

2020-06-28
AtinitoAdmin
Share
Previous Repatriate Canadian former ISIS fighters and family members, Human Rights Watch urges
Next ‘I have the most beautiful room in the world’: A look inside Yellowknife’s COVID-19 isolation centre