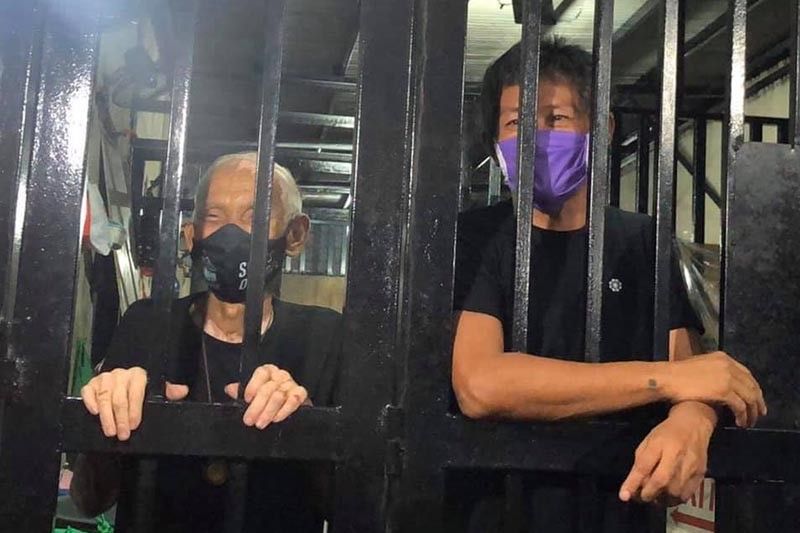 This photo posted by Piston: Pagkakaisa ng mga Samahan ng Tsuper at Operator Nationwide on their Facebook page show Elmer Cordero and Wilson Ramilla in detention. On 6:30 p.m. of June 9, they were released.

MANILA, Philippines — Seventy-two-year-old jeepney driver Elmer Cordero and Wilson Ramilla, who were arrested for protesting thei loss of their livelihood due to the lockdown, are going home after a week in detention.

Alternative media news site AlterMidya streamed the release of the last two of the six jeepney drivers still in detention.

Four of them were released on Monday after posting bail on the disobedience charge cops filed against them, but Cordero and Ramilla had to remain behind bars.

Topacio posted on his Facebook account a copy of the release order for Cordero from Caloocan City Metropolitan Trial Court Branch 51 directed to the police station commander.

“You are hereby directed to release/discharge Elmer Cordero….for having posted the cash bond in the amount of P10,000,” for an estafa case.

The STAR reported that Cordero was charged with a “simple” estafa, filed by a private complainant in 2002.

Ramilla has also been ordered released, according to AlterMidya.

He had a pending carnapping charge, but the lawyer said that the jeepney driver had served one sentence on a plea bargain, while the other had already provisionally dismissed.

Metro Manila shifted to looser health protocols under General Community Quarantine on June 1, but government has yet to allow jeepneys to ply roads, more than two months since they were told to stop operating. — with reports from The STAR/Marc Jayson Cayabyab