The art of botched restorations

Oops, they did it again.

Those mad Spanish art restorers have laid fumbling fingers and brushes on a medieval work once again. And the results, as always, are hilarious.

Just last week we heard “The Immaculate Conception of Los Venerables,” a work by 17th-century Spanish Baroque painter Bartolomé Esteban Murillo, had been sent to a furniture restorer for a bit of, um, sprucing up. The job cost 1,200 euros but the results were — well, probably not quite what Murillo had in mind.

In the first restoration attempt, Mary’s soft, glowing gaze upward is turned into a flat emoji, perhaps suggestive of eye-rolling. In the second pass, Mary’s eyes fasten on the viewer instead of the heavens, and are so mismatched that the “restorer” might have been looking at a Picasso for inspiration.

It’s like that Netflix series Nailed It!, in which deluded people with no baking experience are challenged to create something spectacular in the kitchen. You know, like, “Bake us an Eiffel Tower cake.” The results are generally laughable, sometimes pitiable, and prove that baking is best not left to amateurs. Canadian artist Heather Wise perhaps didn’t mean spiky-haired Lisa Simpson to be the final replacement for baby Jesus’ head that was vandalized in Ontario, but the image struck viral gold.

In the same way, art restoration is an academic discipline, a science even, and should require years of apprenticeship and perhaps a master’s degree before you can even think about touching a Rembrandt or Leonardo.

But in Spain, qualifications are less stringent, and a little more whimsical. You know: just hand it over to a local grandma and let her dab on some fresh paint.

That’s apparently how Cecilia Giménez, a grandmother and amateur artist in Borja, Spain, got the go-ahead to restore Elías García Martínez's "Ecce Homo,” a fresco hanging in a local medieval church. The picture of Jesus was a bit flaky, but that’s nothing compared to the final result: critics dubbed it the "Potato Jesus" or “Ecce Mono” (“Behold the Monkey”) for its strangely mutated visage of Christ. 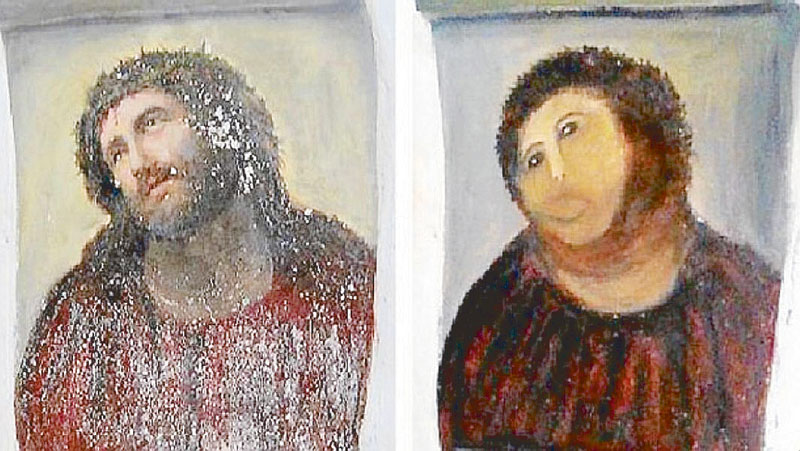 Giménez was “distraught” by the reaction to her restoration attempt, but there was a silver lining: the botched Jesus has become a viral sensation and drawn thousands more visitors who want to see the fresco fiasco in person. The lola artist became an unwilling celebrity (Kate McKinnon lampooned her on SNL) and a constant stream of Giménez “restoration” memes keep turning up, including one of “The Last Supper” where all the faces are incomplete lumps of siopao. There’s even an off-Broadway musical in the works based on this restoration disaster-with-a-happy ending.

Also in Spain, where there are apparently no laws governing art restoration whatsoever, a statue of St. George at a church in Navarre was transformed from medieval chic to Google Avatar.

But seriously. Why is it that European churches, museums and other places turn to the cheapest help they can find? Well, perhaps they don’t have grand budgets these days. Maybe they rely on Google instead of consulting esteemed universities. In short, they have to turn to amateurs instead of professionals.

And you get what you pay for. It’s like if you staged a Hamlet revival on the West End, and chose to cast Tommy Wiseau, that guy from The Room, to play The Dane. (“Ophelia, you are tearing me apaaaat!”) “They turned Saint Barbara into Barbie!”

Or it’s as if you needed a new rocket design for the planned mission to Mars — and you turned to the guy who invented the Pet Rock.

Or, let’s say you needed a strong business leader to restore America’s economic and moral standing on the world stage — but instead you hired a guy who played a businessman on TV.

Art restorations have often been flashpoints of controversy. Even the scrubbed-clean version of the Sistine Chapel ceiling made some historians and artists like Christo and Andy Warhol see red (in truth, the Sistine ceiling is almost a bit too hyper-vivid in its current state, as though Michelangelo had labored over a huge comic strip. But then, perhaps that’s why Renaissance sketches were called “cartoons.”)

Sometimes the restorer just wants to give the artwork a Pretty Woman-style makeover, with LOL results. Take the statue of Santa Barbara at Brazil’s Santa Cruz da Barra Chapel, which was cleaned up in 2012. Removing centuries of grit and, er, foundation, the restorer accidentally left behind a saint expressing not so much religious ecstasy as CPR dummy. “They turned Santa Barbara into Barbie!” said one shocked critic.

And what are we to make of Canadian artist Heather Wise, who offered to restore a statue of Jesus at an Ontario church after a vandal had made off with its head? She even did the job for free, but the results — a spiky-haired infant Jesus head that immediately turned red in the rain and drew online comparisons to Lisa Simpson — became a local laughingstock and a Twitter sensation. Wise said the Jesus head was a “placeholder” she’d cast in terracotta, not the final head, but its reputation spread. So much so that the guilt-struck vandal repented and brought the original head back to the church. And — as I’m sure you’ve guessed by now — the church actually decided to stick with the red Lisa Simpson Jesus head. Because it gets a lot more attention. A statue of St. George in Navarre, Spain, got the Google Avatar makeover.