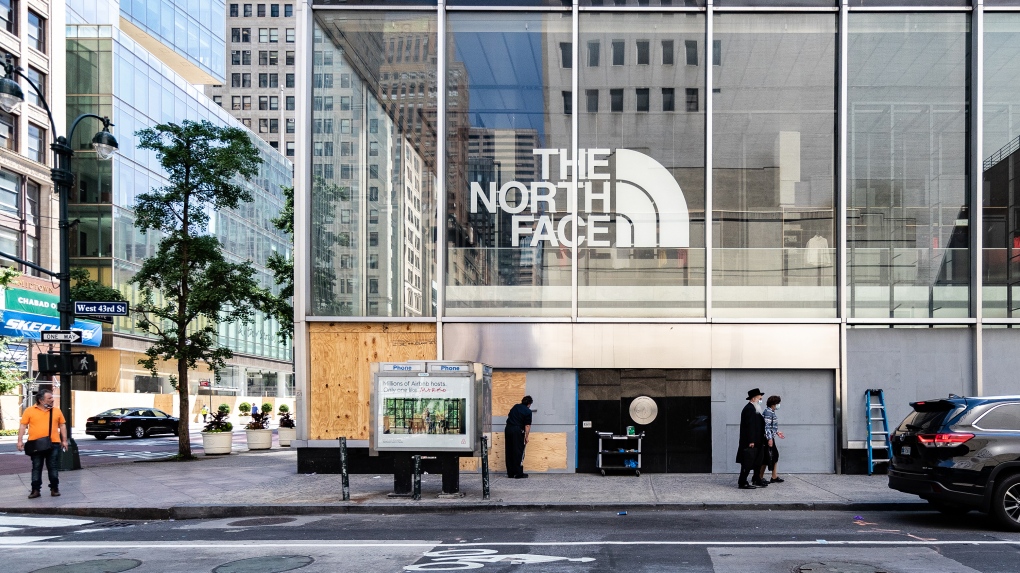 A boarded up North Face Inc. store stands in New York, U.S., on Tuesday, June 9, 2020. The outdoor apparel brand has become the best-known company yet to commit to an advertising boycott of Facebook in light of the social media platform’s handling of misinformation and hate speech — a move that could open the door for other brands to do the same.

Outdoor apparel brand The North Face has become the best-known company yet to commit to an advertising boycott of Facebook in light of the social media platform’s handling of misinformation and hate speech — a move that could open the door for other brands to do the same.

The brand’s decision responds to a pressure campaign by top civil rights groups, including the NAACP and the Anti-Defamation League, known as #StopHateForProfit, which on Wednesday began calling for advertisers to suspend their marketing on Facebook in the month of July.

"We’re in," The North Face tweeted. "We’re out @Facebook #StopHateForProfit."

"For 82 years, we have put people over profits," the company said in a tweet. "We’re pulling all Facebook/Instagram advertising for the month of July."

REI’s announcement was swiftly followed by recruiting company Upwork, which said that it would be joining the campaign.

The flurry of decisions highlights how a number of companies may be about to abandon Facebook, if only temporarily, to express their solidarity with racial justice advocates and their frustration with the social media giant. The moves also follow calls by high-ranking politicians, including House Speaker Nancy Pelosi, for advertisers to use their "tremendous leverage" over social media companies to force them to change their ways. The vast majority of Facebook’s revenue comes from advertising.

Craig Hodges, a spokesman for The North Face’s parent, VF Corp, said a number of other brands in the company’s portfolio are "considering" following in The North Face’s footsteps. VF Corp also owns Dickies, Vans, Timberland and Smartwool among others. For the year ended March 31, VF Corp spent $756 million on advertising.

"The North Face is halting all activity and U.S. paid advertising with Facebook until stricter policies are put in place to stop racist, violent or hateful content and misinformation from circulating on the platform," the statement said.

In a statement to CNN Business, Carolyn Everson, VP Global Business Group Facebook, said: "We deeply respect any brand’s decision and remain focused on the important work of removing hate speech and providing critical voting information. Our conversations with marketers and civil rights organizations are about how, together, we can be a force for good."

For weeks, Facebook’s executive team has confronted a sustained backlash over its handling of President Donald Trump’s inflammatory rhetoric. The company’s inaction on Trump’s online posts, including one comment during an earlier protest that "looting" would lead to "shooting," has been met by employee protests, criticism from former staff and even concerns from scientists funded by CEO Mark Zuckerberg’s philanthropic initiative.

As the nationwide protests over police brutality and George Floyd’s death continued, the mounting calls for marketers to yank their ad dollars from Facebook have targeted companies of all sizes, including major brands such as Coca-Cola, McDonald’s and Starbucks. Ad agency 360i has urged its clients to join the boycott, the Wall Street Journal reported on Thursday.

"Let’s send Facebook a powerful message: Your profits will never be worth promoting hate, bigotry, racism, antisemitism and violence," reads the website for the #StopHateForProfit campaign, which is run jointly by the NAACP, the ADL, Color of Change, Free Press, and Sleeping Giants.

Color of Change met with CEO Mark Zuckerberg this month to express opposition to Facebook’s handling of Trump’s incendiary speech.

"We think in this moment, if you really think that black lives matter, you have to draw a line in the sand, and you have to be willing to pull your seven figures or however much you spend," said Brandi Collins-Dexter, senior campaign director at Color of Change, in a subsequent interview. "Any company that financially supports or otherwise provides cover for Facebook … you’re as much a part of the problem and the infrastructure that allows marginalization of people of color to take place."

Some small businesses have said they would either pull ad spending or take action in other ways. Mental health startup Talkspace, which has raised more than $100 million in venture capital, said this month it would withdraw from a six-figure content partnership deal with Facebook, though it did not mention anything about advertising. The company didn’t respond to requests for comment on the matter.

The activists demanding change face an enormously ambitious task. Facebook is the second-largest player in US digital marketing after Google, and last year generated $69.7 billion from advertising worldwide.