Sure, lockdown may be slowly lifting in Manila, but that doesn’t mean you can just hop on a plane and check out the world’s best museums yet.

So, for those missing an up-close experience of viewing the “Mona Lisa” or “Starry Night,” there are… virtual museum tours.

I took a few days to familiarize myself with some of the biggies out there — you know, the Louvre, the Guggenheim, the Prado, etc. — and it’s definitely a mixed bag. 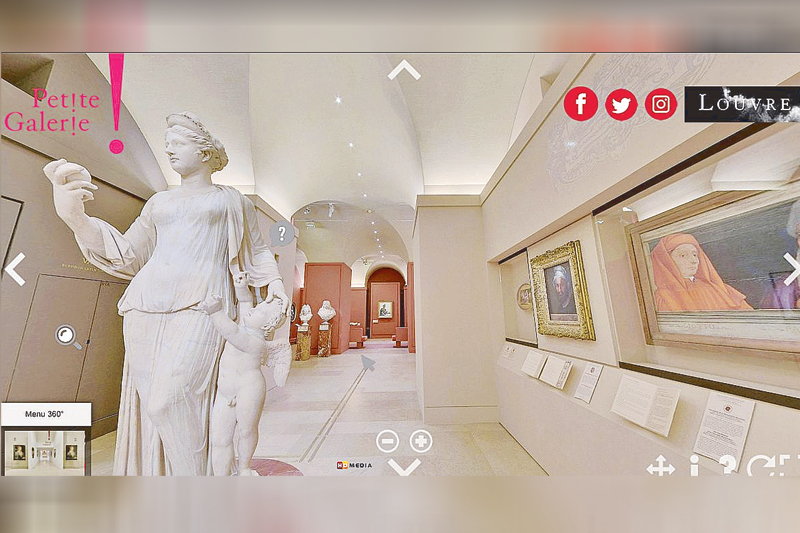 Actually set to reopen to the public on July 6, the Louvre has such a vast collection that online, you’re restricted to a handful of virtual tours. But what a layout. You can follow the arrows to go upstairs, pass through rooms on each floor, look up at the ceilings or zoom in on sculptures and paintings in precise detail.

But it’s limited to only six rooms in the Petite Galerie. One highlight is the Galerie d’Apollon with its ceiling homage to the Sun King, and Delacroix panel “Apollo Slaying the Serpent Python.”

The virtual tour doesn’t include Leonardo’s “Mona Lisa,” but the Louvre offers an up-close look at this famous painting through a “VR – Mona Lisa” app you can download through Apple or Google Play. (“Immerse yourself in a 360-degree video or use a Cardboard viewer to discover the latest findings of research carried out on Leonardo’s works, creative process and painting techniques.”) To be fair, the Museum of Modern Art in New York has one of the richest collections anywhere in the world; but this Google project to encapsulate the best-known works of Klimt, Picasso, Rousseau, Van Gogh, Cezanne and others amounts to an online gallery of photos. It’s okay; but you can look at a photo of “Starry Night” anywhere online. The immersive experience I craved was better served by the next entry. 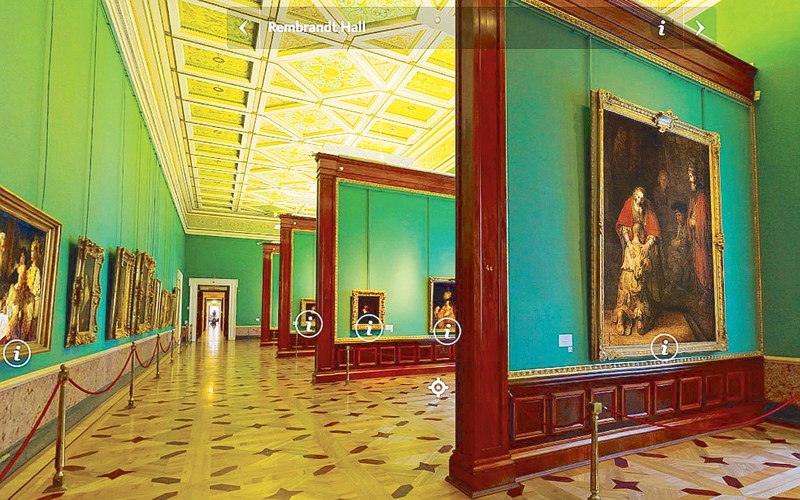 Now, this is it. If you’ve ever been to St. Petersburg, you know The Hermitage is packed with world treasures — things gathered (stolen?) by czars over the centuries — and this virtual tour is an unexpected masterpiece. Click on the “Virtual Visit” link at the above website. Much like the Louvre, you’re plunked down in the center of each room, where you can navigate left, right, forward, up and down. Even better, it’s sequential, venturing from room to room just as you would on foot. Start with the ornate, rococo Jordan Staircase and wend your way up through the Small Hermitage and Pavilion Hall (with its famous gilded Peacock Clock designed by British jeweler James Cox — a whirring automaton composed of three moving birds) through to the Large Hermitage, working your way past Renaissance art, the Da Vinci Hall (with two versions of “The Madonna and Child”), rooms of glorious Titians, El Grecos, Rubenses, Van Dycks — and don’t miss the Rembrandt Hall, including the “Return of the Prodigal Son,” self-portraits and dozens of others. There’s a Knight’s Hall in the New Hermitage devoted to armor that is amazing.

This is an enormous warehouse of jaw-dropping art that could take days to explore, proving Catherine II definitely had quite an eye — and, for once, the 360-tour function is no tease: this is the real immersive deal. Highly recommended. 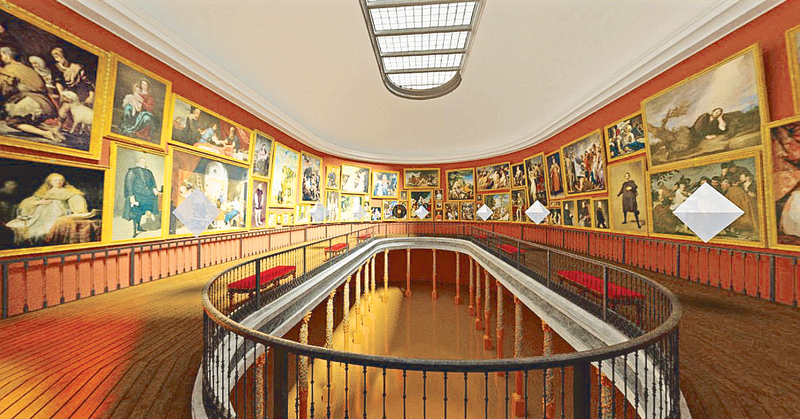 The Prado has an interesting virtual tour: everything of immediate interest is crammed into one mezzanine level; you’re guided about the room by strange 2001-like floating sexagon figures and can identify each famous painting —Rubens, El Grecos, Velazquez’s “Infanta” — by pushing the mouse pointer on top of it.

The virtual tour is actually a recreation of the Sala de la Reina Isabel, which originally contained the highlights of the museum collection, reproducing a photo taken by French photographer Jean Laurent of the Sala back in the 1870s.

The layout feels kind of compressed — “Prado in 5 Minutes” is the general idea — especially if you’ve been to the actual space before with all the time in the world on your hands. It’s fun, nonetheless, but lacks, say, Bosch’s “Garden of Earthly Delights,” Diego Velazquez’s “Las Meninas (The Maids of Honor) and “Triumph of Bacchus,” Goya’s “Colossus,” Caravaggio’s “David and Goliath,” among other greatest hits.

The Met 360° Project offers six short travel-cam videos that walk you through certain sections of the huge collection, though it’s kind of limited. Explore the Great Hall, stroll through The Cloisters, visit the Temple of Dendur (an Egyptian display in the Sackler Wing), The Met Breuer (housing contemporary art), Charles Englehard Court (with bird’s-eye views of the American collection) and the Arms and Armor Galleries (“stand in the middle of a parade of armored soldiers on horseback”). But it only scratches the surface of what the Met offers, and the videos, unfortunately, are very short. One likes to linger in museums a bit longer. 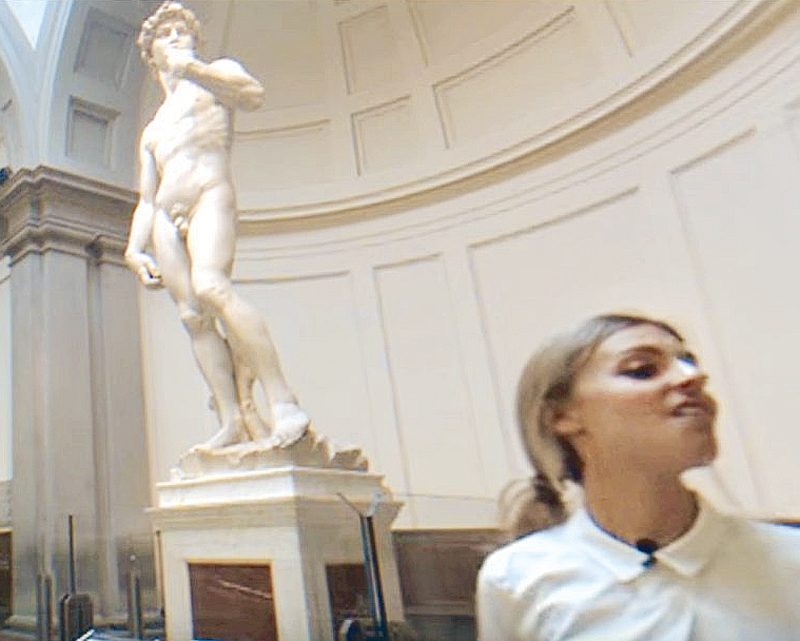 A three-minute YouTube video (“Time Out New York: Step Inside the Guggenheim – A 360/VR experience”) is technically accurate but misleading: you actually see more white walls than art. Somehow, gazing at a single Kandinsky, several small Mondrians and a large Pollock amid a vast white space doesn’t quite capture the entirety of the Guggenheim, for me. Some 2,100 artworks are on display in Amsterdam, marking Van Gogh’s furious pace before his death. But you only get to see two rooms on this virtual site, where arrows on the floor let you navigate around the Dutch artist’s early works, and a few greatest hits. Bitin. Instead, go to YouTube videos (“Van Gogh Museum 4K Tour”) for a better overview.

If all this isn’t enough for you, try Google Arts Project, which has assembled attractive displays of 2,000 museums from around the world, and some “100,000 artworks in high-definition,” allowing you to zoom in with obsessive detail on works by Vermeer, Van Gogh, Monet, Georgia O’Keeffe, Frida Kahlo and hundreds of others. Definitely worth a look. 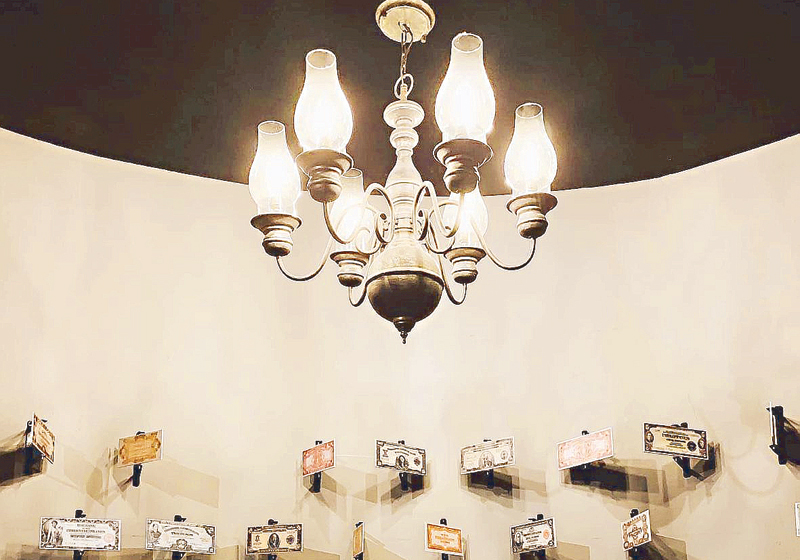 And more locally, the Chinatown Museum in Binondo concludes a monthlong series of livestreams with a peek inside the collection by museum curator Janine Cabato, showcasing Binondo’s glorious past as the world’s oldest Chinatown. It’s on Saturday, June 27, 3 p.m. Visit www.chinatownmuseum.org to check it out.