When Macallan is a-calling, we’re picking up

Last Saturday night, premium Scottish whisky brand Macallan, in collaboration with Globe Platinum, held an online tasting for its special numbered Edition series of single malts, and it was the kind of press event we can get behind in these housebound days. Yes, it was on Zoom; and yes, they sent us all tiny sample bottles of four of their prized Edition malts: carefully crafted by experts, with maestro-like mixes of casks and vats to yield some incredible expressions — the kind most prized by whisky collectors, making bottles of Edition No. 1 quite rare these days. In fact, in 2018 a 1926 bottle of The Macallan Fine and Rare Cask 263 fetched a record $1.9 million. For one bottle.

To understand why it’s such a prize, Globe Platinum held The Macallan Whisky Flight, hosted by whisky expert Hans Eckstein. Before us, at our laptops, we poured out Nos. 2, 3, 4 and 5 into our Scottish Glencairn glasses and explored each for color, aroma and (last but not least) taste.

What I really enjoyed — besides the exquisite whiskeys, which we’ll get to — was the mix of technology and tactile flavor experience. Macallan brand expert Eckstein walked us through the Editions, and there was a chat function on the right to post up our questions. And probably the other great innovation: drinking at home safely! No driving home from an event in a whisky-fueled haze! #NoDesignatedDriverRequired. 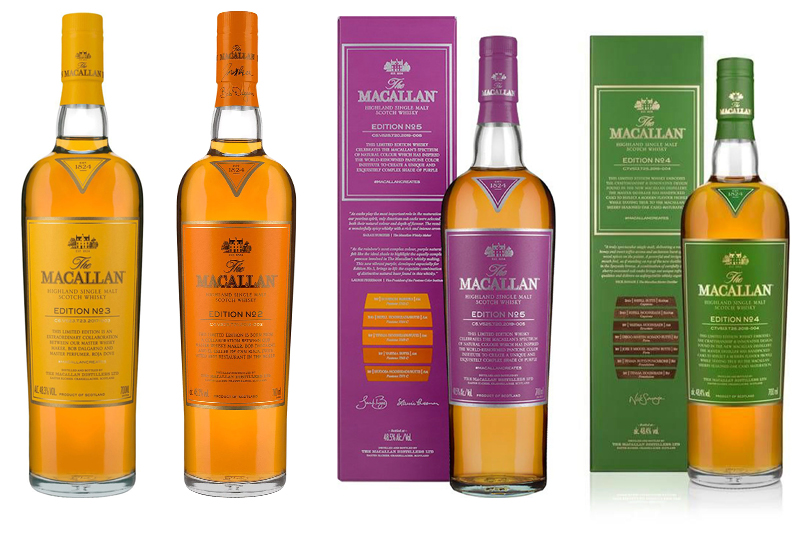 According to Eckstein, broadcasting live from the tasting room of The Refuge in BGC, The Macallan is considered “the Rolls-Royce of single-malt whiskies,” and the Editions take it several notches higher, collaborating with the finest cask experts, restaurateurs, color masters and even perfumers to create an intoxicating blend of whisky excellence.

Having said that, only a certain amount of Edition series is produced per year since 2015, so it’s very uncommon to gather together all these malts in one tasting session. Lucky for us, we had Eckstein on hand to guide us through each sample-size 15-milliliter bottle.

The Macallan Edition No. 2, in a dark amber bottle, is a collaboration between master whisky maker Bob Dalgarno and the three Roca brothers, owners of El Celler de Can Roca in Spain, twice named “best restaurant in the world.” As you’d guess, the focus for No. 2 is taste, carefully selecting American and European first-fill casks to deliver a lingering impression of dried fruits, spice, chocolate and peppery notes with a long finish.

We learned that fine whiskies are already 40 percent ABV (alcohol by volume) so, unlike wine, no swirling of the glass is required to oxygenate the flavors. We learned that each Macallan Edition has a particular code on the bottle (such as “C6 VS23 T23 2017-003”) signifying the types of casks, the number of vats used, the tinting or color grading, and the year created. We learned a lot about butts, puncheons and hogsheads — the various casks involved in whisky aging. We learned how to lift a Glencairn up from the chest to nose its aromas, and how to take a measured “bite” of the whisky with each sip as though sampling and enjoying a steak.

The Edition No. 3 was next, a lighter golden bottle created by Dalgarno and master perfumer Roja Dove (originally with Guerlain). “It’s all about the aromas that went into the cask selection,” notes Eckstein, and Dove selected American oaks that release vanilla and citrus notes for the first casks, but went further up to fifth casks that introduce fruitcake and green apple aromas. In short, there’s a lot of extra flavor going on here thanks to Dove’s nose. Next came Edition No. 4 in a special green bottle that commemorates the new Macallan distillery, built in 2018. Construction of the new facility relied on fitted joints — no nails, no glue — to pay tribute to the Scottish craftsmen who create wooden casks by hand. Seven casks went into the No. 4, giving it a darker, more complex color and balance. I immediately fell for this one; it was my favorite, and Eckstein seemed to agree it was the most robust, featuring big sherry flavors from the European oak casks (“spices and nutmeg coming through, wood spices, vanilla notes”) as well as a viscous mouth coating that lingers pleasantly. It was like a little symphony in a 15-ml bottle.

We ended with another innovation, Macallan working with the Pantone Color Institute to come up with the special tint for Edition No. 5, packaged in a plum-colored bottle. Every single expression of the Editions is 100-percent natural color, notes Eckstein (“We do things the long and hard way”). Holding up the glass, we could agree that the No. 5 had a brighter tone — like “sunlit barley,” as Eckstein described it. Flavor-wise, it held warm, buttery vanilla notes, maybe a bit of peaches or pears coming from the lighter oak casks.

Our drams emptied, we ended with questions, including where to find Macallan Editions (best place is the distillery in Speyside, Scotland, but for now Eckstein recommends finer local distributors; also bars such as The Refuge serve it, and even Duty-Free Shopping has some lower-end Macallans for sale). He suggests visiting their website (www.themacallan.com) and Facebook and Instagram pages for buying tips, as well as recipes for what he calls “our own spin on the Dalgona coffee fad using Macallan whiskies.” I’ll be sure to check that one out next.

Globe Platinum strives to delight its customers with their passions — whisky and spirits being one of them — and provided special Macallan Whisky Flight kits to its Platinum customers and a few invited guests.

Visit themacallan.com, their Facebook page and #Macallancreates for more stories.