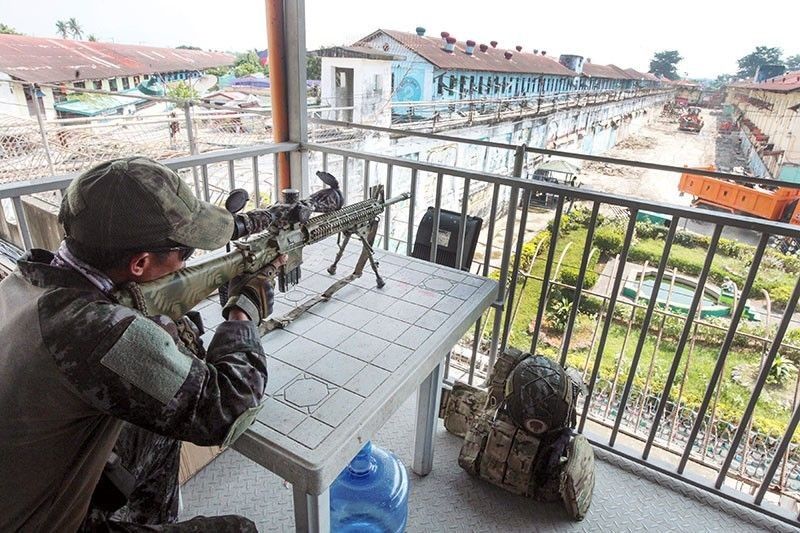 A police commando keeps watch on the demolition of illegal structures at the New Bilibid Prison in Muntinlupa City in October 2019.

MANILA, Philippines — Some Persons Deprived of Liberty have already died after contracting the coronavirus in the country's cramped prisons, but the Bureau of Corrections is not at liberty to disclose their identities due to data privacy complications, the bureau said Sunday.

"Rest assured that the Bureau of Corrections is doing its best to address this pandemic. In fact, we have a high rate of recovery and we are glad to report to the public that all our interventions appear to be doing well and effective. We have been doing quick identification, isolation, and treatment programs which have greatly mitigated the risks," he added.

RELATED: Courts released over 43,000 detainees since lockdown in March

Asked if there are any existing policies for third-party witnesses to be present in the event of an inmate's death or cremation, Justice Secretary Menardo Guevarra said: "We are looking at several theories. I expect that there are existing protocols whenever deaths occur inside the prisons."

"We actually need not mention any names. we're interested in what's happening out there (or in there)," he added.

Data from the Bureau of Jail Management and Penology (BJMP) from October 2019 said that the bureau posted a 450% congestion rate, which, they said, meant that six prisoners occupied the space of four square meters, which was only meant for one detainee.

In early July, the Office of the Court Administrator disclosed that 43,171 Persons Deprived of Liberty (PDLs) have already been released by trial courts from March 17, when the enhanced community quarantine was implemented, to July 3.

"We have also entered into partnerships with other government agencies, international organizations, and NGOs to strengthen our drive in addressing this pandemic which claimed thousands of lives around the world. We are thankful for the continued support of countless good samaritans who have unselfishly shared their resources, time, and expertise with us in these very challenging times," Bantag added.

'You're keeping us in the dark'

As prisoners’ families anxiously await the long-delayed decision on the petition seeking the release of those at risk from the threats of the pandemic, Kapatid, a group composed of families and friends of political prisoners, slammed the overt silence of prison officials on coronavirus figures within the country's highly congested jails.

Families of political prisoners trooped to the Supreme Court compound on Tuesday morning. They held red beaded roses handcrafted by the inmates to ask SC justices to “vote for life.”

This is the group's second statement casting fear over the lack of transparency on the part of prison officials. As early as June, the group had already called for clarity on the part of the bureaus of corrections and jail management regarding the actual condition of inmates inside the country’s congested facilities.

“The silence of prison officials is concerning. What are they hiding? It’s been over a month since we last heard of details regarding infections and deaths inside the country’s prisons, where physical isolation, among other health protocols, is in no way possible,” said Fides Lim, the group’s spokesperson.

"Disregarding the need to report real-time data on coronavirus cases inside prisons means leaving in the dark those behind bars and the families who live with the worst fears while asking for exigent and positive action on the petition filed by 22 political prisoners before the Supreme Court last April 8,” she added.

According to Kapatid, the last time the group heard from the Bureau of Jail Management and Penology was on June 11, when prison officials disclosed that at least 745 prisoners, of which six have died, and 125 personnel who tested positive for the virus.

The Bureau of Corrections has also recorded at least 222 cases as of its latest update, the group said. Ten have died.

As of Saturday's tally from the health department, the Philippines' caseload for coronavirus patients has breached 65,000.

— with reports from Kristine Joy Patag

2020-07-18
AtinitoAdmin
Share
Previous Task force apprehends over 7,000 for ‘unauthorized couple back-riding’
Next Palace: Patients can avail of health services of other LGUs if local hospitals full