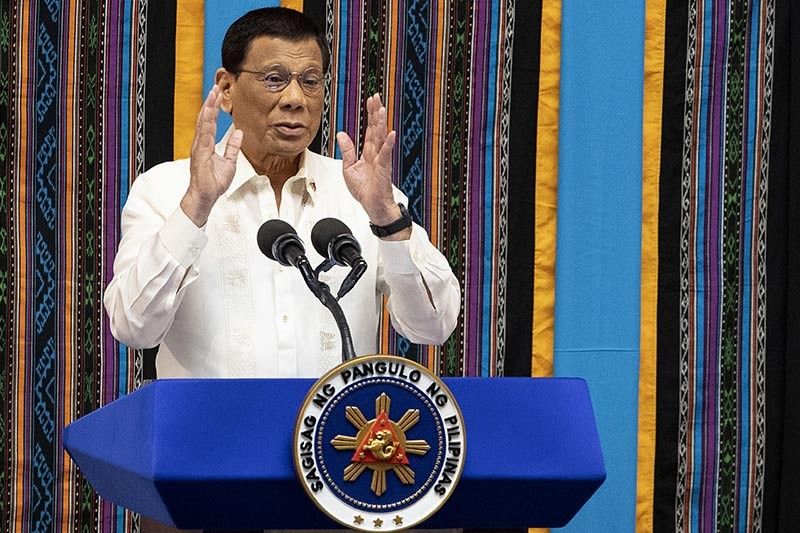 President Rodrigo Duterte gestures as he delivers his state of the nation address at Congress in Manila on July 22, 2019. Duterte’s 2019 SONA speech lasted for 93 minutes. The prepared speech of the president, who is known to make long-winding, impromptu remarks, initially was said to last for 45 minutes.

MANILA, Philippines — The Center for Media Freedom and Responsibility on Thursday warned that the government's decision to bar media teams from entering the venue of the president's State of the Nation Address could reduce coverage of the address to broadcasting state propaganda.

The government on Monday announced that only state-run Presidential Broadcast Staff – Radio Television Malacañang (PBS-RTVM) would be allowed inside the Batasang Pambansa for the event as recommended by the task force against COVID-19.

"We become then the vehicles that carry…the mechanisms and the communication that is determined by the government," CMFR Executive Director Melinda de Jesus told ABS-CBN.

De Jesus further warned "that much of the resources of the government's communication is dedicated to propaganda…and the controlling of it has been so demonstrated in the recent times that the media cannot be allowed, cannot allow themselves to be part of this mechanism."

State media has been airing the president's pronouncements during meetings with the Inter-Agency Task Force on the Management of Emerging and Infectious Disease as well as his speeches.

Earlier this month, Inquirer and Rappler reported that a pre-taped speech given by President Rodrigo Duterte on July 13 was aired with redactions.

Ten minutes of the speech, which was given just days after the president's allies at the House panel on legislative franchises voted overwhelmingly to deny ABS-CBN a new franchise, was cut so as to remove any mention of the network made by the president.

"As far as credibility, [we need to ask], what is the truth of anything that comes out of their communications office in Malacañang? Why are we spending so much money when we don't even, or cannot, trust the information that the government provides?"

CMFR — along with other members of the Freedom For Media, Freedom For All coalition as well as news companies and individual journalists — has asked the Presidential Communications Operations Office to allow a pool of journalists to cover the SONA alongside state media.

Media, public urged to be more discerning of government content

CMFR's executive director also issued a call to action to both the media and the public to be more discerning when dealing with content put out by state-run media outlets.

She said the media should consider not airing the SONA live from the feed of PTV or RTVM and instead airing it after reviewing footage and including more context to what has been said.

"If [the government] doesn't wish to provide that whole mechanism, then the media needs to decide that it will not cover [it live], it will cover it post facto. It will cover it after it has received whatever it has received from every other source and basically present its own perspective again as it does..and should do, anyway, every time there is a national event in public."

De Jesus also cast doubt on restrictions placed on media due to the coronavirus pandemic, saying: "I think the audience, the public, should be very well aware about…issues that are being manipulated because there is COVID. It is as though it has become a blanket with which to cover everything that the government wants to do in terms of its communication. And i think the public is the only real check [on] that."