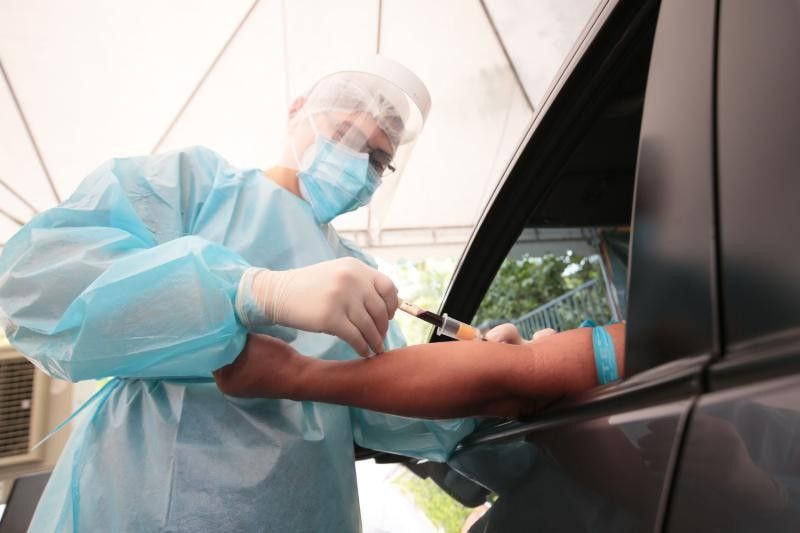 Photo dated July 7, 2020 shows a medical worker extracting blood during the launching of the drive-thru blood testing at the Medical City at Ortigas, PAsig City. The drive thru testing uses ECLIA (Enhanced Chemiluminiscence Imuunooassay), the most reliable antibody test to date, is fully automated COVID-19 antibody test globally certified by the US and Philippines’ FDA.

MANILA, Philippines — An additional 2,241 cases of the coronavirus were added to the health department's latest tally on Sunday, bringing the number of confirmed cases to 67,456 recorded since the new pathogen's emergence in December.

According to the Department of Health's latest update, 398 more have recovered from the virus while 58 have died, bringing their totals to 22,465 and 1,831 respectively.

Sans the deaths and the recoveries, there are 43,160 active cases in the country as of this publishing.

Health Secretary Francisco Duque Wednesday afternoon said that the country "successfully flattened the curve since April" only to walk the claim back later on after drawing flak.

It has been 124 days since enhanced community quarantine was first implemented on March 17. While the country continues to endure the world's longest quarantine, the daily additions in coronavirus cases have begun numbering in the thousands, though health officials insist that this is partly because of expanded testing capacity.

Government officials to this day continue to pin the blame largely on the discipline and "failures" of Filipinos, whom they say—incorrectly—are complacent in practicing social distancing.