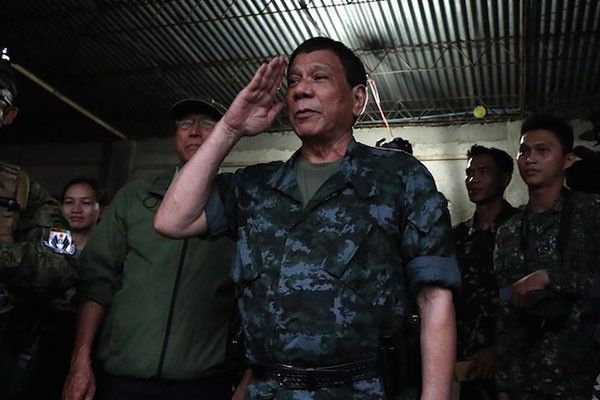 In this Oct. 2, 2017 photo, President Rodrigo Duterte, on his sixth visit to Marawi City, led the inauguration of the Bahay Pag-asa Project at Barangay Bito Buadi Itowa that is intended for the residents of Marawi who were internally displaced due to the conflict in the area.

MANILA, Philippines (Update 2, 8:02 p.m.) — President Rodrigo Duterte has signed the anti-terrorism bill into law, days after the Department of Justice and the Office of the Chief Presidential Legal Counsel submitted their recommendations on the proposal, which human rights groups warn could lead to abuse by security forces.

Presidential spokesperson Harry Roque confirmed this in a text message to Philstar.com.

"Yes," he said in a text message when asked if the bill was enacted. | via @prinzmagtulispic.twitter.com/mgpzNb6IPo

In a separate statement, Roque said Duterte signed the Anti-Terrorism Act of 2020 on Friday.

“As we have said, the President, together with his Legal Team, took time to study this piece of legislation weighing the concerns of different stakeholders,” Roque said.

At least three legal offices sent their review to the Palace: Chief presidential legal counsel Salvador Panelo said his office recommended the signing of the bill, while the Integrated Bar of the Philippines—the national organization of lawyers in the country—urged Duterte to veto it, citing constitutional infirmities in the legislation.

Justice Secretary Menardo Guevarra kept his department’s review of the bill largely private, with an assurance that the Philippine Constitution was used as their parameters in looking into the bill.

In an address to the nation on June 22, Duterte said "forces arrayed against" the government like the Abu Sayyaf and the Communist Party of the Philippines have taken advantage of the COVID-19 pandemic.

"It has undermined the national security of the country," Duterte said of the communist insurgency, which he said started in the 1950s.

Duterte signed the Anti-Terrorism Law of 2020 as the country struggles to contain the deadly coronavirus. On the same day that the contentious bill was signed, health authorities recorded the highest spike in new cases as it logged 1,531 infections, pushing national tally to 40,336.

But Roque said: “Terrorism, as we often said, strikes anytime and anywhere. It is a crime against the people and humanity; thus, the fight against terrorism requires a comprehensive approach to contain terrorist threat.”

Congress sent the enrolled, or final, version of the bill to Malacañang on June 9, giving the president 30 days to approve or veto it. Duterte certified the bill urgent, prompting the House of Representatives to fast-track passage of the bill, which it had copied from the Senate version, making a veto unlikely.

The Concerned Lawyers for Civil Liberties (CLCL) has expressed opposition to the bill, saying it is "antithetical to human rights and democracy in the Philippines."

The National Union of People's Lawyers, meanwhile, said it "contains imprecise and poorly worded provisions on the definition of ‘terrorist act,’” as it seeks to criminalize “threats to commit, planning to commit, conspiring and prosing…the vague concept of ‘terrorist acts."

The Department of the Interior and Local Government, the department that the Philippine National Police is part of, has said that, despite concerns raised by lawyers, human rights workers, academics, and business groups, the anti-terrorism bill will not be used to silence dissent.

"The aim of the Anti-Terrorism Bill is to eradicate terrorism from our country. The people have nothing to fear from this bill; it is only the terrorists and their supporters who should fear it," DILG Secretary Eduardo Año said.

READ:DILG: Anti-Terror Bill will not be used to silence dissent

Fight vs contentious law isn’t over yet

The Palace confirmed the enactment of the Anti-Terrorism Act of 2020 on a Friday, past 5:00 p.m. — or when courts have already closed.

Several groups have already manifested that they will challenge this new anti-terrorism law before the Supreme Court.

The National Union of Peoples’ Lawyers president Edre Olalia vowed that the fight isn’t over yet. “We will not cease to exhaust any and all legitimate steps and platforms to challenge this draconian law,” he told reporters in a message.

Retired Supreme Court Senior Associate Justice Antonio Carpio earlier said he would be one of the petitioners to challenge the Anti-Terrorism Act of 2020. He told Philstar.com that he is still unsure of the exact date they will file the petition.

The enactment of the law came a day after the Bangsamoro Transition Authority Parliament passed a resolution asking Duterte to veto the law.

MindaNews quoted Bangsamoro Autonomous Region in Muslim Mindanao Chief Minister Ahod Ebrahim, also known as Al Haj Murad, as saying: "As the leader of a political entity born out of the struggle against injustice and oppression, it is my moral duty to speak out in order to ensure the measures intended to address terrorism will not be used as a means to subvert the fundamental rights and freedoms of individuals, in general, and normalize abuse and discrimination against the Bangsamoro, in particular.”

Carpio had earlier warned that with “the anti-terrorism act as part of the land, it is as if the Philippines is permanently under a situation worse than martial law.”