This year heralds the 110th anniversary of Ermenegildo Zegna. In an alternate universe, this would’ve been the perfect opportunity to orchestrate a grand celebration; but as the world faces challenging times, brands are confronted with a moment that requires seriousness — a moment to rethink, reassess and reflect on things. What does the brand stand for? What is its contribution to the planet? And for Zegna’s artistic director Alessandro Sartori, it was a way to consciously honor an historic milestone, celebrate the brand’s values and showcase its latest offerings — by bringing it back to where it all started. Literally.

When the founder Ermenegildo Zegna started the company as a textile mill in Trivero, Italy in 1910, he dedicated himself to the local environment and landscape of the town. In support of the local community, he started planting thousand of trees and eventually carried out a massive reforestation plan reaching its surrounding mountains. This would later on become Oasi Zegna, a 100-square-kilometer natural park — an affirmation of the brand’s commitment to earth, long before it became fashionable. The show, which was streamed online, saw models walking through the nature reserve as though it was their runway. They stride over a hill, a forest, across lawns and stone paths captured by tracking cameras, punctuated by wide shots taken by drones unveiling the verdant milieu of the Oasi. The reportedly three-kilometer route leads the models to the century-old fabric mill. Inside, they pass through the halls of wooden-covered archives and through the massive, fabled weaving machines of Zegna.

Synonymous with sharp Italian tailoring, Ermenegildo Zegna takes the opposite route for its summer ’21 look. Alessandro Sartori proposes a sense of lightness throughout the collection — from the choice of fabrics, to colors and construction. Worth noting are the suit jackets made using a shirt fabric and produced using shirt construction — all weighing just 180 grams, as light as a tiny battery. The lapels and shoulders have been evidently lowered down to give a more relaxed mood. The billowing trousers are casually cinched with double overlap and knotted belts. Conspicuous kangaroo pockets subtly yet cohesively tie together the collection. Most of these pieces, much to the brand’s credit, have been crafted with continuing use of sustainable materials as part of Zegna’s #UseTheExisting mindset.

Prerecorded over several weeks, the presentation comes to an end on the rooftop of Lanificio Zegna with the models in standing formation as the drone pans out to reveal the archetypal Zegna facility and the sprawling countryside around it. Symbolically, the show is a narrative description of the voyage of the fabrics that the house uses — from nature to the textile mills, concluding with a collection presentation — and, most especially, how Ermenegildo Zegna remains so connected to the planet since its birth, 110 years ago. 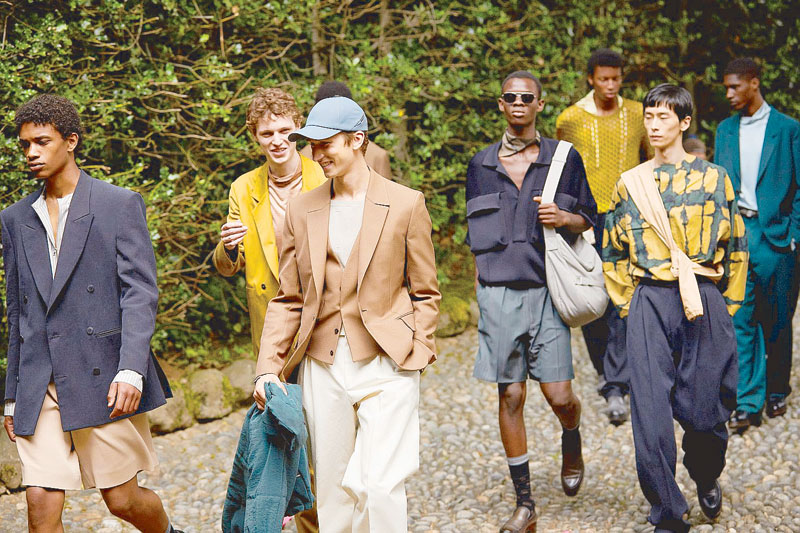 Poetic neutrals against the lush greenery of Oasi Zegna, a 100-square-kilometer nature reserve founded by the Zegna family in 1930s

In the Philippines, Ermengildo Zegna is distributed by SSI Group, Inc. and is located in Greenbelt 4, Ayala Center, Makati.