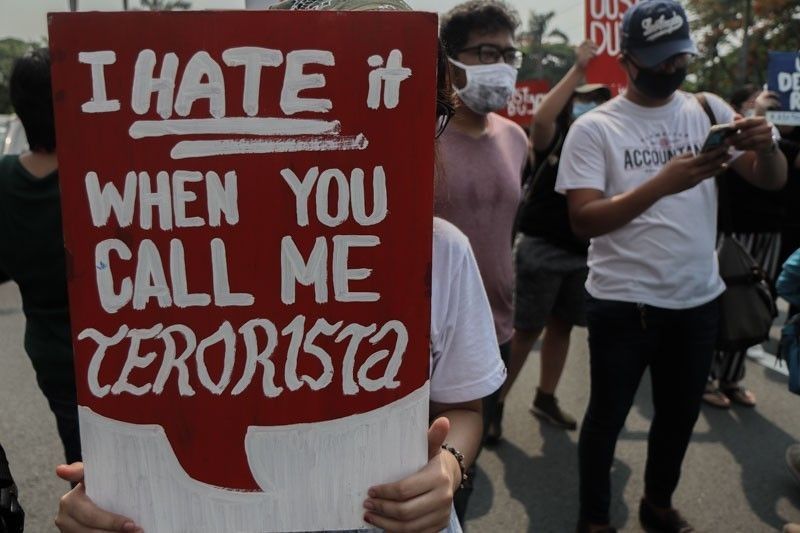 Activist groups troop to University of the Philippines Diliman to oppose the proposed Anti-Terrorism Act of 2020.

MANILA, Philippines (Update 1, 8:28 p.m.) — The fight against the contentious Anti-Terrorism Act of 2020 does not end with its enactment into law, as critics vowed to exhaust all means to challenge this new legislation.

National Union of Peoples’ Lawyers president Edre Olalia slammed the signing of the anti-terrorism bill. “This without doubt is the most unpopular and perilous piece of legislation that could ever be pushed by a government that is fixated with the potion of power,” he said in a statement.

NUPL vowed that they will not stop in exhausting all means and platforms to “challenge this draconian law.”

And with them is human rights group Karapatan whose secretary general Cristina Palabay said: “We will not let this fascist regime cower us into silence and fear. We cannot let them take away our hard-won rights and freedoms.”

Palabay warned that this new anti-terrorism law “has serious and far-reaching implications not only on our work as human rights defenders, but also on the public who stands to be terrorised by this law.”

The NUPL earlier said they already have a draft ready and they are “posted to file the appropriate action at the earliest possible time.”

Lawyer Chel Diokno also hit the enactment of of the anti-terrorism bill, saying that it will "terrorize our democracy, not the terrorists."

He urged the public to continue the nation's fight against the contentious law and to protect democracy.

But legal challenge to the Anti-Terrorism Act of 2020 would have to wait for a little over two days, as the Palace announced its enactment on a Friday, past 5:00 p.m., when the Supreme Court already closed.

Anti-Terrorism Act may be challenged immediately

Retired SC Antonio Carpio will also be one of the petitioners who will challenge the law, which he warned would put the country in a perpetual state that is worse than martial law.

Carpio earlier said that this law can be facially challenged, meaning that it can be challenged immediately before the SC even before an actual injury or violation to person’s right was committed.

When petitioners challenged the Human Security Act of 2007, which the Anti-Terrorism Act repealed, the SC had then junked their pleas as it held that the petitioners “failed to demonstrate how they are left to sustain or are in immediate danger to sustain some direct injury.”

But it would be a different case with the Anti-Terrorsim Act. In a GMA News Online report, Carpio was quoted as saying: “Upon a facial challenge because the law punishes speech—inciting to commit terrorism. This is an exception to the rule that you cannot question the constitutionality of a law before SC if you are not accused of violating it.”

Carpio told Philstar.com that they have yet to determine when they will file the petition before the SC.

Minority Senator Francis “Kiko” Pangilinan also said he is ready to question the constitutionality of the law, which he said contained vague provisions, before the SC.

Pangilinan is one of the two — the other, Sen. Risa Hontiveros — who voted "no" when Senate deliberated on the anti-terrorism bill in February.

The senator earlier said that the government may look into different approaches into addressing terrorism, which the lawmaker said is “bred by poverty, lack of opportunity.”

Lacson promises to guard against possible abuse of the law

For bill sponsor and author Sen. Panfilo Lacson III, credit must be given to President Rodrigo Duterte and his strong political will.

“I cannot imagine this measure being signed under another administration. If only for this, I take my hat off to the President,” he said in a statement.

The senator, who butted heads with the legal community as he defended the bill, said he would “exert extra effort in guarding against possible abuse in its implementation, notwithstanding all the safeguards incorporated in this landmark legislation.”

Duterte signed the Anti-Terrorism Law of 2020 as the country struggles to contain the deadly coronavirus — on the same day that health authorities recorded the highest spike in new cases as it logged 1,532 new COVID-19 infections, pushing national tally to 40,336.