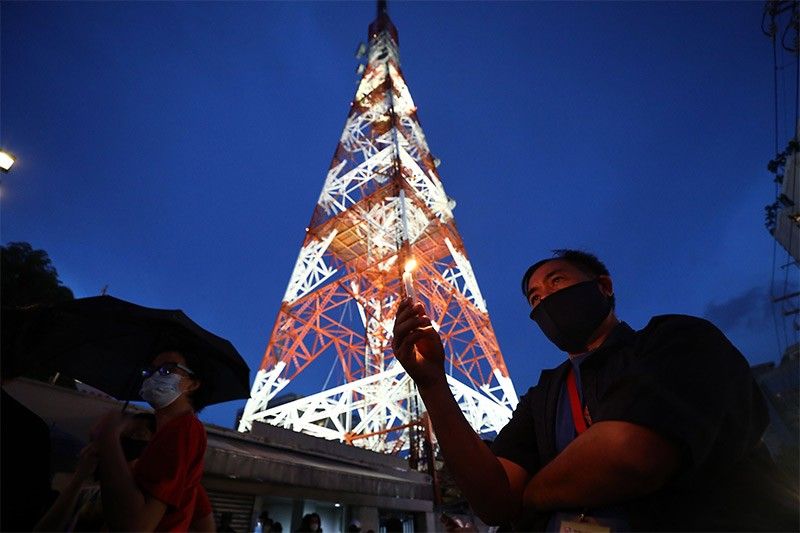 Kapamilya artists, employees and supporters light candles in front of the network’s main office in Quezon City following the denial of the House of Representatives on the 25-year franchise renewal of the network on Friday.

MANILA, Philippines —Multi-sectoral groups and concerned individuals are set to hold on late Saturday afternoon a mass motorcade running across several cities before finally converging outside the ABS-CBN compound in Quezon City for a coordinated noise barrage.

Aside from anticipated protesters at ABS-CBN, participants in the noise barrage are expected nationwide including in Metro Manila, CALABARZON and Central Visayas as well as other avenues including conferencing platform Zoom.


The planned activities coincide with the taking effect of the Anti-Terrorism Act of 2020 Saturday.

The motorcade and follow-up noise barrage aim to call attention to both the recent franchise denial of ABS-CBN by Congress and the signing into law of the anti-terrorism act by President Rodrigo Duterte despite widespread local opposition.

“The denial of ABS-CBN's franchise renewal is only part of a larger system of state repressive actions against the very people they swore to serve. Nonetheless, let us continue to hold the line,” read a unity statement from student formations in the University of the Philippines in promotion of the motorcade and noise barrage.


“We urge everyone to remain firm among our ranks, despite the challenges of our political situation. The administration's fascism continues to reek. The current pandemic revealed how rotten our systems are and how the corrupt are only concerned in forwarding their own interests. Let us stand united and hold those in power accountable for every account of transgression they committed.”

2020-07-17
AtinitoAdmin
Share
Previous Senators to DOH: Use cheaper Filipino-made COVID-19 test kits instead of imported brands
Next Up to 8 Twitter accounts had data accessed by hackers during breach, company says