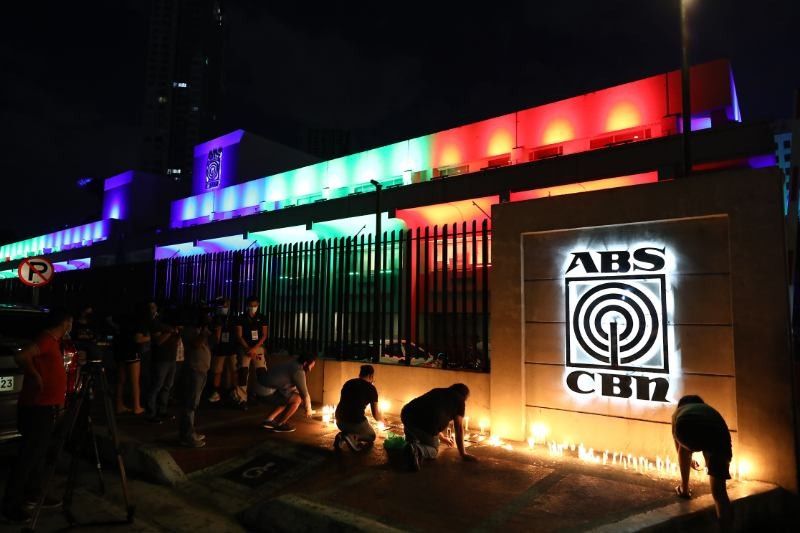 File photo shows employees and supporters lighting candles at the gate as the ABS-CBN Corporation office in Quezon City shines the network’s colors.

MANILA, Philippines — Tax allegations against broadcast giant ABS-CBN Corp. were brought up on Thursday as hearings continue into the franchise application of the beleaguered media company that the president previously vowed would be shut down.

At Tuesday afternoon's continuation of the House hearing on the legislative franchise of ABS-CBN Corp., Rep. Elpidio Barzaga (Cavite 4th District) insinuated that the company has been shirking on paying taxes.

In a statement read by Rep. Mike Defensor (Anak Kalusugan Party-list), Rep. Eric Yap (ACT-CIS party-list) was quoted as saying in Filipino: "It became clear to us that they were involved in a tax avoidance scheme by means of distribution companies in Luxembourg, Hungary, and the Cayman Islands. Foreigners can put their assets and businesses here to avoid paying higher taxes in their countries. This is tax avoidance. ABS-CBN is a tax avoider. This is a wake-up call for us to study the present tax regulations in the country."

Lawmakers acknowldeged during the hearing that tax avoidance is not illegal, although the panel said it would invite Bureau of Internal Revenue Commisisoner Caesar Dulay to a future hearing.

A previous fact check by Philstar.com found that the company has existing compromise agreements with the government over taxes. A compromise agreement is a contract whereby the parties make reciprocal concessions in order to resolve their differences and avoid, or put an end, to a lawsuit.

Defensor said that those agreements do not include the supposed tax avoidance, which he said the BIR should also look into.

This comes after the NTC, in yet another cease and desist order, told ABS-CBN Corp. to stop airing over TVPlus in Metro Manila and its subsidiary SkyCable Corp. to cease the operation of its direct-to-home satellite service.

'A rose by any other name'

Remulla again took issue with ABS-CBN operations under its TVplus services continued in the wake of the cease and desist order filed against them by the National Telecommunications Commission—a subject that had already been addressed two hearings ago.

“In other words, they kept it going from May 5 until July 1,” he said.

Telecommunications Commissioner Gamaliel Cordoba said: "Actually, your honor, Carlo Katigbak said that ABS-CBN had a block-time agreement with AMCARA Broadcasting, which they used for Channel 43 in Metro Manila. That’s why they continued to air."

The commissioner added that NTC did not regulate such agreements, which falls under the jurisdiction of the Kapisanan ng mga Brodkaster ng Pilipinas through self-regulation. On Tuesday, the same organization, along with the Philippine Cable and Telecommunications Association expressed support for the company's bid for a renewed franchise.

Rep. Rodante Marcoleta (SAGIP party-list) went as far as quoting Shakespeare in justifying calling the action a usufruct, saying, "a rose by any other name will still be a rose."

At an earlier hearing, ABS-CBN Corp. CEO Carlo Katigbak said: "In the past, the NTC has permitted other companies whose franchises have expired and were currently being deliberated to continue with their operations until such time as either the application is approved or denied. We would like permission to ask for the same privilege to be extended to ABS-CBN in the spirit of fairness."

"The cease and desist order does not cover Channel 43. It's not on the list… A block-time arrangement is a standard commercial agreement that is quite common in the broadcast industry. Many other broadcasters do this as well," he added.

The hearings have also looked into labor issues at the network giant, although, as Rep. Micaela Violago (Nueva Ecija, 2nd District) pointed on Wednesday, as many as 15 other broadcast companies with labor cases are still operating.

“Why is it that until now, there are other broadcasting companies still operating despite having expired franchises? They might also be violating labor law or tax evasion law. We should also look into this so that we would seem fair in the eyes of the Filipino people, and we do not favor any specific broadcasting company. So that we could also see the practice in the broadcasting industry," she said.

In a statement issued Thursday, the National Union of Journalists of the Philippines slammed Defensor, Remulla and Marcoleta for what it said was their "postur[ing] as if they were champions of the oppressed and use the workers as pawns for their real agenda, which is to make sure ABS-CBN is denied a franchise."

"It is also an absolutely stupid charade since shutting down an enterprise will never solve labor issues but merely add to the ranks of the unemployed. The same goes for the Department of Labor and Employment which, while taking ABS-CBN to task over labor issues, has all too often closed its eyes or even abetted abuses of workers’ rights, not just in media but other industries as well," it added.

The union, along with other press and media groups, has called the company's struggle for a franchise renewal an attack on press freedom, pointing to Duterte's many tirades against the company in the past.

The company itself said on Tuesday that it is ready to re-examine its employee benefits and the disparity in worker regularization.

“ABS-CBN is asking for a renewal of the franchise, which means it is the right and duty of Congress to review their performance for the past 25 years. They should be able to answer the questions. They knew they would be going back to Congress to review another franchise,” Remulla said then. — Franco Luna