Breaking News
Home / Philippine News / National Library director: No law mandates that I must be a licensed librarian

National Library director: No law mandates that I must be a licensed librarian 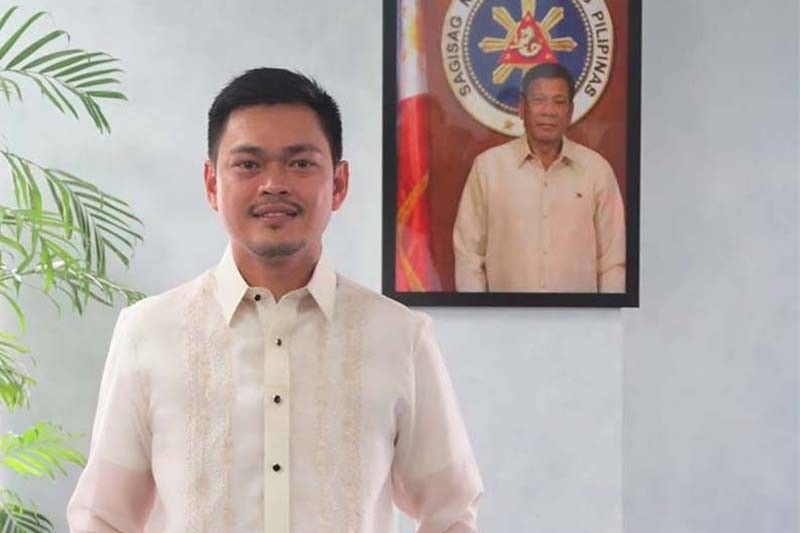 In this April 6, 2016, the new Director IV of the National Library of the Philippines, Ceasar Gilbert Adriano, was sworn into office.

MANILA, Philippines (UPDATED 7:00 p.m.) — The National Library of the Philippines head on Thursday issued a statement addressing the criticisms hounding his name, including his controversial appointment to the highest post of the organization.

Cesar Gilbert Adriano, was appointed by President Rodrigo Duterte as the executive director of the NLP on March 17, 2017 and was sworn into office on April 6, 2017.

Adriano’s appointment, however, is being questioned by registered librarians since he is not a licensed librarian.

Vernon Totanes, director of the Ateneo de Manila University's Rizal Library, in January 2018 filed a complaint before the Office of the Ombudsman accusing Duterte of violating the Republic Act 9246 or the “Philippine Librarianship Act of 2003” when he appointed Adriano.

Gary Alejano — then a representative of the Magdalo party-list — also filed House Resolution No. 1758 seeking to rectify Adriano's appointment in March 2018.

Adriano that year said he will answer the complaint at a proper venue.

Three years later, Adriano released a statement defending his appointment, saying there is no law mandating that the NLP director should be a licensed librarian.

“I am very much aware of the provisions of RA 9246. Such awareness and understanding is the reason why I welcome every criticism that comes my way, even being called the #NationalNonLibrarian. Because for a person to be qualified to be a Director at the National Library of the Philippines, one does not need to be a licensed librarian,” Adriano said in a Facebook statement that appears to have been deleted or set to private.

“RA 9246 does not mandate that the director of NLP must be a licensed librarian. No law mandates that. Hayaan na lang muna natin may maipasang batas para dito. Dalawang taon na lang teh! Non librarian sa imung kewong!”(Let's just wait for a law to be passed for it. Just two more years. Non librarian your face)!" he added. 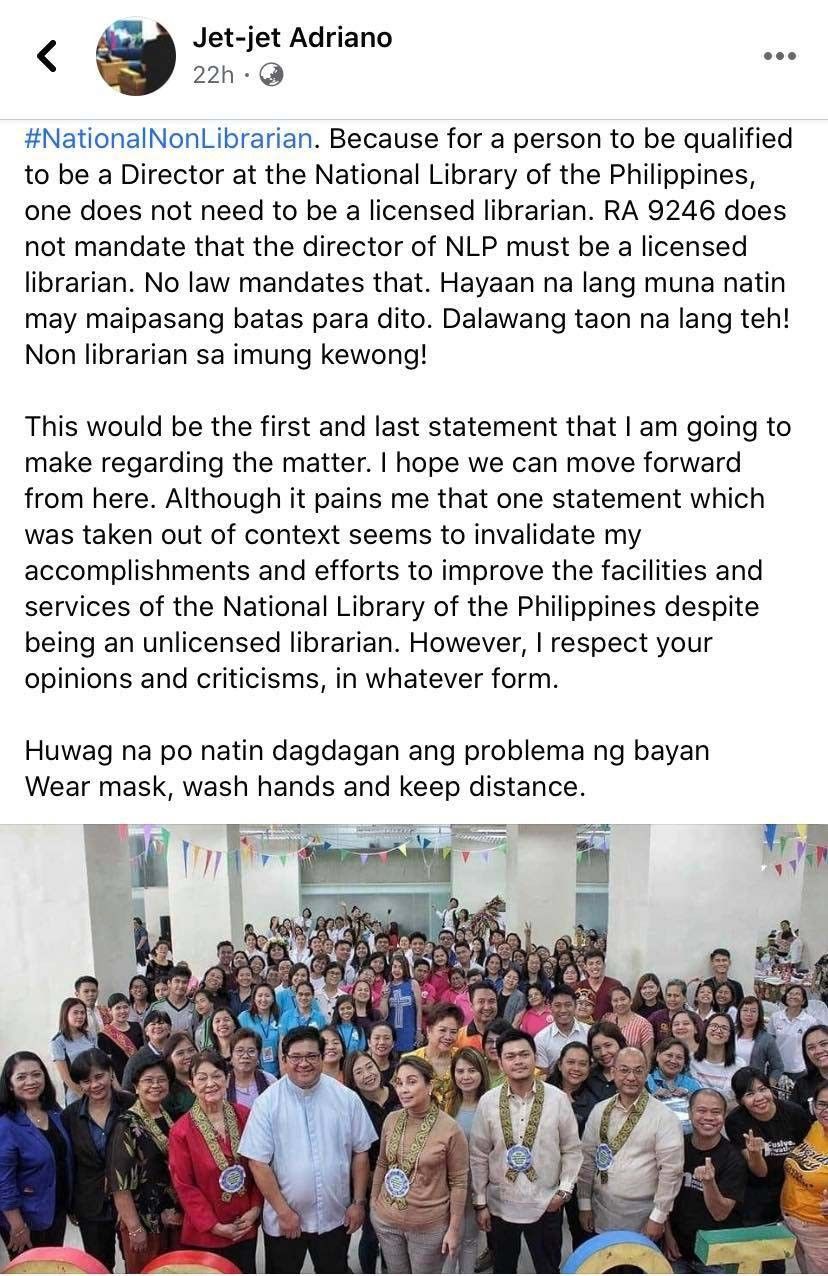 Screenshot of an excerpt of Adriano's statement archived by Philstar.com

In February 2016, the Civil Service Commission released a posting on the NLP Director IV vacancy that requires a master’s degree, librarian’s license, 120 hours of managerial training in the last five years and at least five years of supervisory experience for the post. This was also cited by Alejano in his resolution.

The Salary Grade 28 position of director of the NLP has an annual salary of P812,208. This salary grade and Adriano’s appointment were also indicated in the Career Executive Service Occupancy Report of the Office of the President dated Dec. 28, 2017.

In January 2018, presidential spokesperson Harry Roque said that the Palace will look into the NLP director’s appointment even if there are remedies for it, including quo warranto.

A quo warranto petition is a legal proceeding against a "person who usurps, intrudes into, or unlawfully holds or exercises a public office, position or franchise" and was used to remove Chief Justice Maria Lourdes Sereno later that year.

The issue on Adriano’s supposed unlawful appointment floated anew after he wrongly claimed librarianship courses are not offered outside Metro Manila.

“I don't know how to bring this especially now since those in the province have no course offering librarianship there,” the NLP director said in a mix of English and Filipino during a virtual meeting with the House Committee on Basic Education and Culture, where he pushed for the creation of public libraries in every local government unit.

In his statement, Adriano said it has come to his attention that his statement “caused quite a stir in the librarian community.”

Several librarians called him out for his wrong remark and reminded him that there are more than 70 library schools in the country. These include Totanes, Professional Regulatory Board for Librarians Lourdes David, University of the Philippines School of Library and Information Studies as well as the UP Library and Information Science Students Association, among others.

“It is appalling that the leadership of the National Library of the Philippines is unaware that there are more than 80 academic institutions offering LIS degree programs all over the country, in fact, in the 2019 Librarian Licensure Examination, a total of 1,024 graduates with LIS degrees from 88 LIS schools took the said licensure examination,” UP LISSA said.

“While the librarianship profession in the Philippines is relatively small in number, this does not discount the significance of the role librarians play in nation building through literacy, scholarship and preservation of historical materials and cultural heritage,” it added.

On the other hand, UP LISSA said they strongly condemn the misinformed statement released by Adriano, citing that he is the “head of an institution that should be the forefront of factual and accurate information.”

Adriano, however, addressed these criticisms and said that there is a need to provide a context why he uttered the supposed erroneous statement.

“For the record, when I was asked by Congresswoman Evelina G. Escudero, Representative of the First District of Sorsogon, she’s pertaining to one of the provisions in our proposed bill pushing for the establishment of public libraries in all local government units and making them as a permanent institution within the LGU,” Adriano said.

Adriano said Escudero’s statement that not all universities and colleges in the province offer Bachelor of Library and Information Science is a reality, which he also witnessed when he monitored Mindanao libraries.

“There is really a deficiency as to the number of licensed librarians vis-a-vis the number of LGUS in the Philippines. Even Congresswoman Escudero acknowledged the deficiency….” The NLP head said.

“I have no intention of discrediting other provincial schools offering for the said course,” he also said.

Meanwhile, during the virtual meeting with the House panel, Adriano also suggested that teachers, even those that are unlicensed librarians, should be added to the list of people qualified to head public libraries or reading centers.

Librarians, however, likewise called this suggestion out, citing that it is a violation of the “Philippine Librarianship Act of 2003” that states that “only qualified and licensed librarians shall be employed as librarians in all government libraries.”

David cited the following three sections of the law which stated that only licensed librarians may be hired as librarians: Section 26 or Illegal Practice of Librarianship, Section 31, Employment of Librarians and Section 32, or the penal provision for practicing without a license.

The PRC official added that she is already seeking a meeting with Escudero to discuss these matters.

'I did not advise the illegal practice of librarianship'

Adriano, for his part, denied that he advised the illegal practice of librarianship.

“Since it was already established that there would be an impending deficiency once the proposed bill becomes a law, I just answered the question of Cong. Escudero and suggested that maybe we can study the possibility of including teachers in the qualification,” the NLP official said.

“This statement does not mean that I am advocating or advising for the illegal practice of librarianship,” he added.

The NLP director said this is the first and the last time he would talk about the matter.

"I hope we can move forward from here. Although it pains me that one statement which was taken out of context seems to invalidate my accomplishments and efforts to improve the facilities and services of the National Library of the Philippines despite being an unlicensed librarian. However, I respect your opinions and criticisms, in whatever form," Adriano concluded.