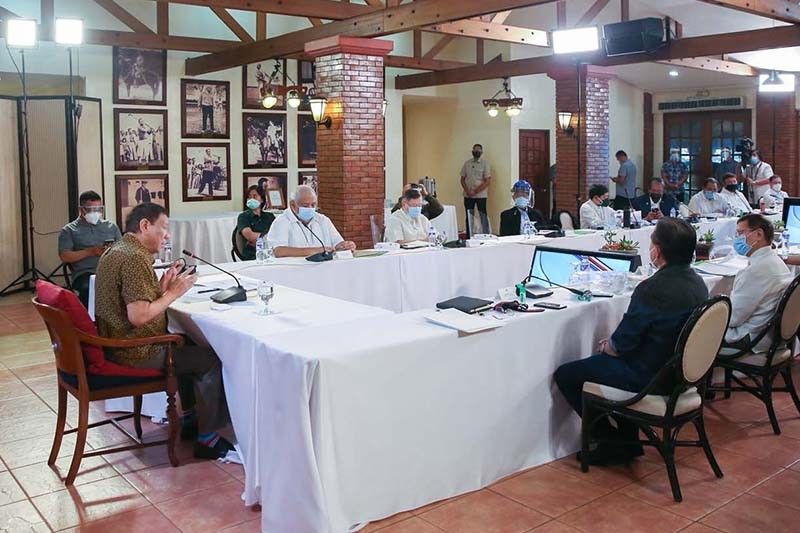 President Rodrigo Duterte holds a meeting with members of the Inter-Agency Task Force on the Emerging Infectious Diseases (IATF-EID) at the Malago Clubhouse in Malacañang on April 27, 2020.

MANILA, Philippines — President Rodrigo Duterte never talked about charter change with the Cabinet, an official said Thursday, as critics hit efforts to amend the Constitution while the country is grappling with a pandemic.

Cabinet Secretary Karlo Nograles said the executive branch is aware that the decision on whether to amend the charter lies with Congress.

"We do not talk about charter change in the IATF (Inter-Agency Task Force on the Management of Emerging Infectious Diseases). That's really within the realm of Congress," Nograles told ABS-CBN News Channel.

"The president did not mention anything regarding charter change. It's not something that he's talked about or spoken to anyone of us about," he added.

A shift to federalism was one of Duterte's campaign promises in the 2016 elections, although surveys have indicated that the public does not favor charter change.

In a pre-recorded address aired on Tuesday morning, Duterte noted the difficulty of imposing health protocols like wearing masks in the US.

"The only thing that's going our way in our favor is that we are a unitary type of government … the central government's hold is different from the United States. They have more freedom there and there are things which is no-no and nobody can…"

"But dito sa Pilipinas ‘pag sinabi ng, well, whatever department has — ‘pag sinabi niya na ganoon, ganoon talaga (if a department says this is the law, then that is it) and you can enforce the law."

The League of Municipalities of the Philippines, a group composed of more than a thousand mayors, is pushing for amendments to the Constitution, claiming it would spur development in the countryside.

The group is calling for the institutionalization of the Mandanas ruling of the Supreme Court — which states that the “just share” of local governments should be based on all national taxes, not just on national internal revenue taxes — and the lifting of restrictions on foreign investments.

The push for charter change did not sit well with some sectors who claimed that it reflected the administration's "misplaced" priorities. Some critics suspect that the amendments to the constitution may be used by politicians to perpetuate themselves in power.

While the shift to federalism is one of Duterte's campaign promises, presidential spokesman Harry Roque has claimed that charter change is not a priority of the president.

"The truth is the president, the whole government, through the IATF, is focused on the problem of COVID-19. So charter change is not a priority," Roque said at a press briefing last Monday.

LA TRINIDAD, Benguet — Governor Melchor Diclas of this province revealed that there are talks …