Revenge not the answer: Duterte asks military for calm over soldier deaths 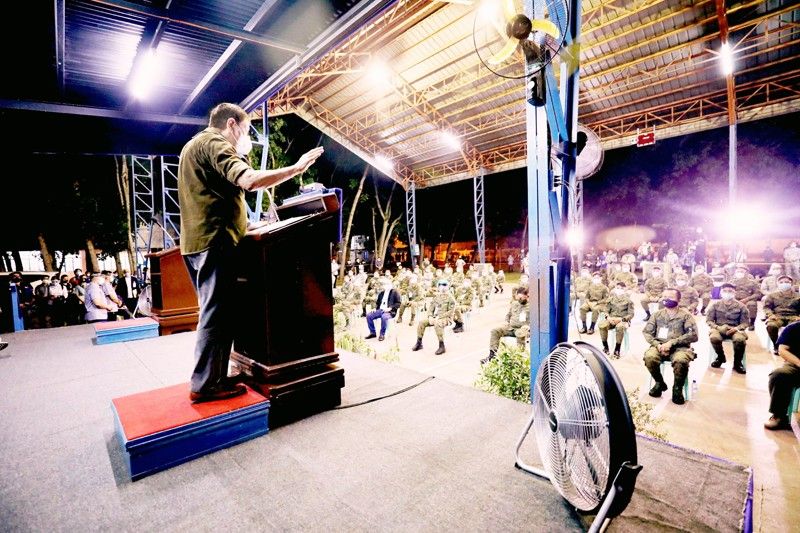 President Duterte addresses troops during his visit to Edwin Andrews Air Base in Zamboanga City the other night.

MANILA, Philippines — President Duterte appealed for sobriety Friday night from the ranks of the Armed Forces of the Philippines (AFP), following a shooting incident with the police which resulted in the death of four members of a military intelligence unit in Jolo, Sulu early last week.

Breaking his own quarantine and strict security protocols, Duterte flew to the Edwin Andrews Air Base in Zamboanga City and spoke to the troops to calm them down.

In his speech, Duterte urged cooler heads to intervene in the midst of an already tense situation between the AFP and the Philippine National Police (PNP) because of the shooting incident in Sulu.

“Itong nangyari, pati ako on the sidelines, nakita ko na hindi nga maganda (What happened, even on the sidelines, I saw that it was not good). And it has generated so much, maybe, hatred, so much animosity between the two units, the AFP and the PNP which is not good because in the end, it would be the people who would bear the brunt for this,” he said.

Duterte said he cannot prevent anyone from the military if they want to seek revenge for the deaths of their colleagues. But the commander-in-chief said there is a need to cool things down to avoid further damage to the institutions.

“At the end of the day, just give me one answer: Did the country benefit from furthering the violence? I know you are mad, and it is just proper that you feel that way, I am also angry at what happened,” he said.

The President said he wants “to make a simple request, a plea, regarding what happened” and that “the best way for us to do” is to wait for the investigation.

Duterte said he has directed the National Bureau of Investigation (NBI) to investigate and “search for the truth” in the name of justice for the slain military personnel.

Violence is not the answer to the situation, he added.

Presidential spokesman Harry Roque Jr. reiterated Duterte’s call. “The President only has one message: He will ensure that there will be justice, the perpetrators in the [death] of four members of the armed forces – including a major – in Jolo, Sulu will be imprisoned and punished,” he said in Filipino.

In appealing for sobriety, Duterte also urged the military to not lose focus in protecting Filipinos.

“Let us not lose sight of that reality… I know you really want to shoot… at the end of the day, I will ask, ‘what good did it do for all of us?’” he said.

The tension between the PNP and the AFP stemmed from an incident involving local police in Sulu who killed a four-man team from the Army’s 9th Intelligence Service Unit, led by Maj. Marvin Indammog along wth Capt. Irwon Managuelod, Sgt. Jaime Velasco, and Cpl. Abdal Asula.

“I’m not ready to condemn anybody except that we should give time to the NBI to finish (the investigation). They have started, they are at it right now,” the President continued.

Duterte vowed an impartial investigation and those who are at fault will be made accountable for their actions. “It behooves upon you to think about the solemn duty. Yung pangyayari na yan (That incident), it is on the side. Ang importante, mainbestiga (What’s important is that it’s investigated) and justice is served,” he said.

“Walain nyo yang (Let go of) hatred,” Duterte said. “I am pleading for your understanding and to calm the troops. Explain to them their role in the society, that the real enemy, the NPA and the Abu Sayyaf…” the President told his men.

Duterte added he went out of his way to explain to the troops that they cannot get out of this if hatred is allowed to prevail.

He admitted, however, that the incident has “caused a fraction both in the Army and the PNP.”

In ending his speech, the President reiterated that justice will be served and the axe would fall on those responsible for the shooting incident.

He also mentioned that he has given the military his full support since he assumed office, and urged them to abide with his “plea” not to allow things to get out of hand since the police also have the responsibility of keeping peace and order in the community.