Ronson Culibrina remembers the island where he grew up as being “monochromatic” albeit with daggers of colors. He would swim with the other kids in the lake during its better days and, since they had no computers or gadgets, they improvised. Pieces of bamboo would transform into cars and guns, and bits of coconut charcoal would turn walls into fantastic murals.

Culibrina — now an exciting young artist who has upcoming shows at Secret Fresh, Art Basel HK, Sydney, Yavuz Gallery in Singapore, and next year at Vargas Museum — is, at heart, still that young boy appropriating memories, images and objects from Talim Island and Laguna de Bay, while musing on pop culture and art history as well as examining metaphorical weather conditions and the temper of the times. Ronson’s painted images — according to artist, curator and the director of The Working Animals Art Projects, Ruel Caasi — “continue to engage viewers.”

Caasi explains, “Ronson’s art has evolved from appropriating the works of old masters in order to conjure playful commentaries on contemporary issues, to creating more personally-informed works drawn from recollections and encounters. His art is also an ongoing exploration of form and devotion to skill and technique, so the best is yet to come.”

A glimpse of Culibrina’s latest opus validates the curator’s observations.

For his show at Secret Fresh, the artist focuses on a part of a traditional fishing boat used as a balancing mechanism called the “batangan.” Culibrina shares, “My works then visualize metaphorically the idea of balancing amid a rapidly changing lifestyle and environment. Lately, I have been fixated on using an iridescent palette which magnifies the chaotic convergence of figures.” 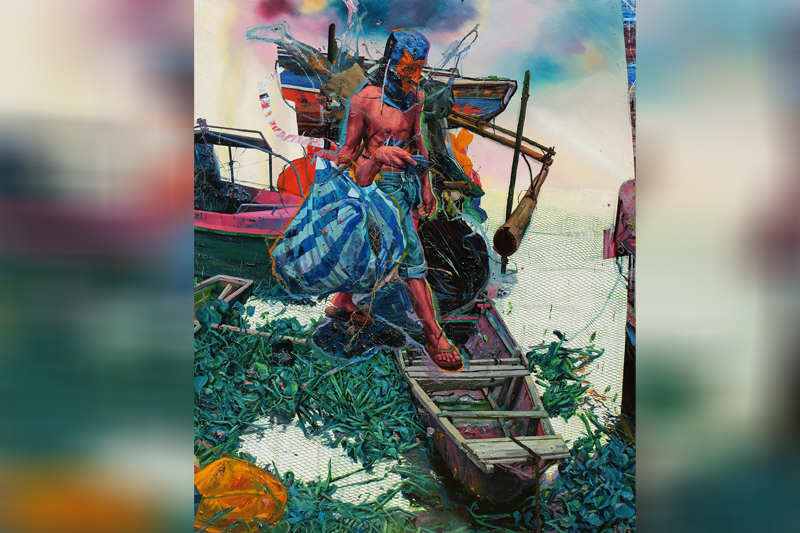 Chaos can be elegant in the hands of such a capable artist.

For a piece called “Low Pressure Area,” Ronson depicts the “head of a witch-like woman with an umbrella of weather-forecast colors indicating where heavy rains are likely to fall” sitting on top of a “sakagero,” a fisherman wearing a mask to hide his identity as an illegal operator. “He either fishes in restricted areas or uses illegal-size fishnets, something that endangers the lake itself,” explains the artist. The man has no choice but to bow to “the pressures of day-to-day survival.”

Another painting shows the consequences of the actions of the sakagero: a paradise of blue turns into an empire of detritus.

And, for his “Rainbow Spill” series, Culibrina portrays the ambiguity of objects forming rainbow-like patterns on the water, just like an oil spill. Is it foreboding or does it stir hope?

“I saw how my hometown transformed from a quiet, fishing town into a busy urban area — and it fueled my fascination with the clash between tradition and modernity, which I explore a lot in my art. The site, sights and people also made their way into my art, so my formative years in my hometown still plays a crucial role in my artistic process.”

The lakeside living in Talim Island in Rizal is thing of the past now. Currently, the artist operates in a three-door, 500-square-meter painting studio with a basement for his many experimentations. The pandemic has confined him inside his studio and has hindered his predilection for gathering sources of inspiration through actual or physical observation. But he thinks that a good way to adjust to the new (ab)normal brought about by COVID-19 is to transform challenges into opportunities. “Artists should explore new trajectories in their art, maybe by tapping the potentials of the virtual or online platform, or working with digital art forms. So, like most people, I rely these days on the Internet and social media to get a glimpse of the outside world.” A painting from the “Rainbow Spill” series

He may be marooned indoors just like the rest of us, but since he is surrounded by his paintings of boats, fisherfolk and a body of water that could turn from mellow to mercurial and then back again, Ronson Culibrina can still see rainbows spilling and hear the lake sing. 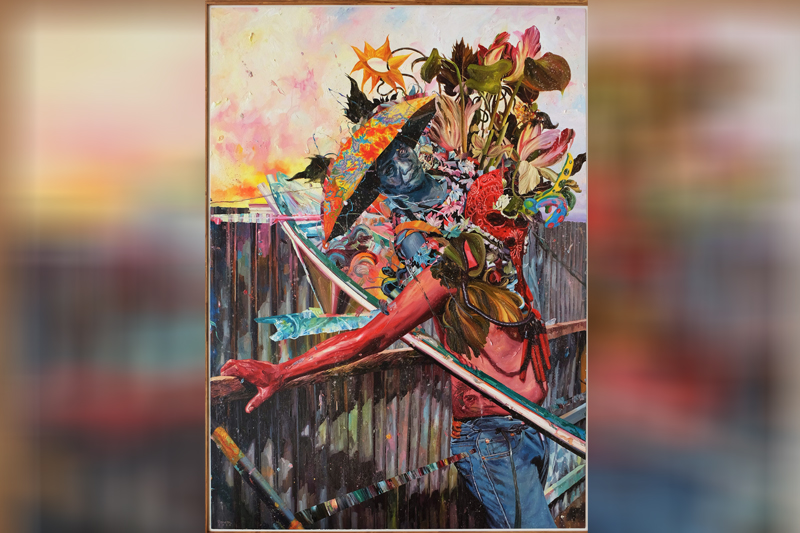