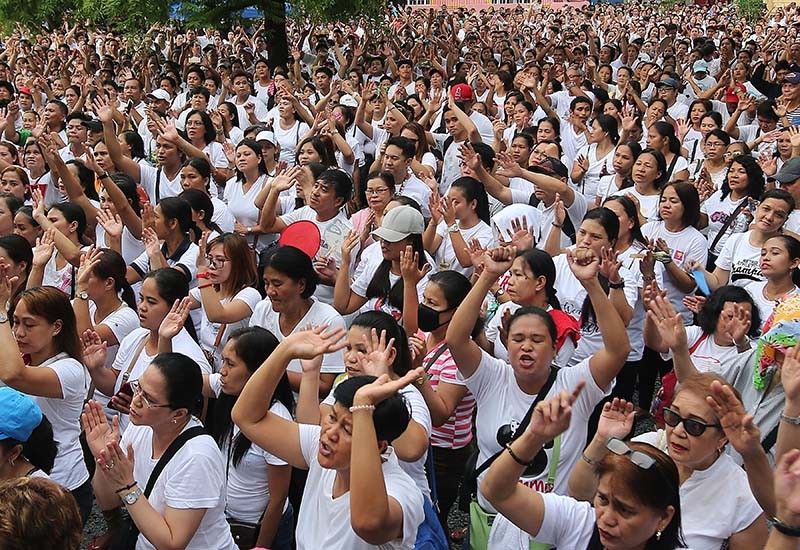 KAPA Ministry Taytay Branch holds a thanksgiving prayer on June 16, 2019 as they call on President Rodrigo Duterte to allow their investment scheme to operate again.

In a statement, the Securities and Exchange Commission (SEC) hailed the arrest of KAPA founder Joel Apolinario, who is facing charges of syndicated estafa, among other cases.

“With the mastermind already behind bars, we are positive about the progress and resolution of the criminal cases we have initiated to bring KAPA to justice,” SEC Chairperson Emilio Aquino said.

The KAPA scandal was exposed last year after the group was accused of being involved in a “Ponzi” scheme, an investment program that offers impossibly high returns and pays investors out of capital contributed by newly recruited members. KAPA stands for Kabus Padatoon, which is Bisaya for "make the poor rich."

KAPA’s case brings to mind the multibillion-peso scam involving Aman Futures Group Philippines, Inc., tagged as one of the biggest scams in the Philippines. The Aman Futures scam collapsed in 2012 after the firm ran out of money to pay its members the promised profits.

Aside from syndicated estafa, Apolinario, along with other KAPA officers and promoters, were also slapped with criminal charges for various violations of the Securities Regulation Code.

A person found to have violated the law, or the relevant rules and regulations promulgated by the SEC, will face a maximum fine of P5 million or imprisonment of seven to 21 years, or both.

On July 21, Apolinario and 25 others were nabbed in an isolated resort in Lingig, Surigao del Sur. A gunfight between Apolinario's henchemen and law enforcers broke out during the arrest, killing two of the KAPA founder's men.

The operation was based on a search warrant issued by a Surigao Del Sur court. Following the encounter, the suspects were likewise charged with illegal possesion of firearms and explosives, adding up to the pile of criminal cases against them.

“The Commission stands committed to protecting the public from predatory and fraudulent investment schemes, more so during the pandemic. It will be persistent in pursuing the perpetrators," Aquino said. — Ian Nicolas Cigaral