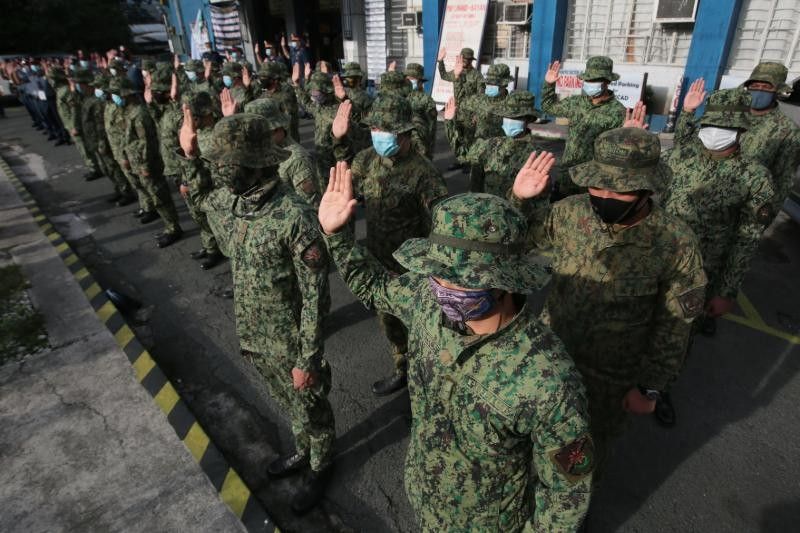 In this photo dated August 3, 2020, personnel of the Quezon City Police District’s Kamuning Police Station 10 are pictured during their morning flag-raising rites.

MANILA, Philippines — In line with the chief executive's announcement of a modified enhanced community quarantine over Metro Manila and nearby provinces, the government's quarantine enforcement task force is once again mobilizing its forces—including the national police and the military—to set up checkpoints, its commander said Monday.

President Rodrigo Duterte announced late Sunday night that modified enhanced community quarantine would be hoisted over Metro Manila, Laguna, Cavite, Rizal, and Bulacan once more, in response to the resounding calls from medical practitioners calling for a "time-out."

Speaking in an interview aired over dzMM TeleRadyo, Police Lt. Gen. Guillermo Eleazar said that the bulk of the task force checkpoints will be along the borders of municipalities to stop the flow of people crossing boundaries, and only those with quarantine passes will be permitted to cross.

"Basically, our checkpoints will be in the boundaries of cities and provinces. While the local governments iron out their quarantine passes, we will check them through our checkpoints…If you are not an authorized person outside residence because you are not part of the workforce in permitted industries, don’t go out of your homes," Eleazar said.

RELATED:Confused about the 'Authorized Persons Outside of Residence' policy? Here's a quick guide

There will be checkpoints installed in between towns as well, the task force commander said, an initiative that was "in compliance with the safety protocol of staying at home and avoiding unnecessary travels."

Eleazar added in a statement sent to reporters that those who are not qualified as an 'APOR' will not be allowed to cross the boundaries of the cities and municipalities to avail of the basic goods and services.

“We highly encourage them to buy food and avail other basic goods and services in their respective communities because they will not be allowed to pass the Quarantine Control Points which we will set up anew at the borders of cities and municipalities of Metro Manila and the four provinces that would be reverted to MECQ,” he said.

The deployment of these supervisors was already in the task force's plans even before MECQ was declared on Sunday night.

“We will be implementing stricter measures in areas under MECQ for 15 days starting midnight," Eleazar also said.

"This is not something new to our kababayan in Metro Manila and the four nearby provinces because we have been under this community quarantine before so what we are asking is for the cooperation of everybody to make the implementation of the security measures both for the public and your Philippine National Police."

Healthcare advocacy groups over the weekend also slammed the prevailing approach to the coronavirus, saying it did not have its basis in science and did not serve any purpose in dealing with a medical issue.

This shows in the company the chief executive surrounds himself with: within the government's coronavirus task force, Social Welfare Secretary Rolando Bautista and Interior Secretary Eduardo Año are former military generals.

"Doctors and healthcare workers must reclaim quarantine for what it should be: A public health measure aimed at saving lives by stopping the spread of disease. We must reject the distorted forms of 'community quarantine' being imposed on us, as these are devoid of scientific sense and health purpose, and serve only to oppress our people," they said.

"The government reneged on and neglected the people's welfare with the social amelioration program (SAP) during the first ECQ; the second tranche is still incomplete in its distribution. Moreover, a militarist handling instead of a medical approach to the pandemic wreaks fear among the people and proliferates human rights violations—while doing little, if not nothing, to curb the number of cases and spread of disease," the Coalition for People's Right to Health also said in a separate statement.

In July, Sen. Nancy Binay pointed out that a number of incidents of over-zealous enforcement involving the Philippine National Police violated their own rules along with minimum health standards "to the point that they have put to risk the health of people, and violated basic rights."

Activist groups across sectors also slammed the militaristic approach over the past 139 days of community quarantine, calling it "conspicuous proof" of the government's "failure" to directly address the health concerns brought on by the coronavirus pandemic.

"We've seen this film before, and we didn't like the ending. The government does not learn from its blunders that mobilizing police and military, instead of health workers and professionals, during quarantine is futile and literally a waste of manpower and resources," fisherfolk's federation Pamalakaya said in a statement.

The fisherfolk group said that government subsidy for the affected sectors should be "a must" while areas are under the modified enhanced community quarantine.

National Federation of Peasant Women national chairperson Zenaida Soriano also said: “Our medical frontliners’ plea for more stringent community quarantine seeks to refine the government’s pandemic control strategies. Going back to the old militarist lockdowns without necessary and urgent steps to improve our health care system is useless and will only prolong the agony of our frontliners."

“The Duterte government’s lack of a plan to flatten the curve other than wait for the vaccine and ordering the arrest of quarantine violators is not reassuring and is causing more uncertainty,” Soriano added.

Eleazar: 'An ounce of prevention worth a pound of cure'

In justifying the earlier deployment of Special Action Forces to Metro Cebu, Eleazar said that the 150 elite police troopers equipped with drones and armored vehicles, along with the 100-member augmentation force also sent to Cebu City are part of the administration's "medical solution" to address the coronavirus threat.

“Even the medical community recognizes the saying that an ounce of prevention is worth a pound of cure. This is it, we have been deploying policemen and soldiers to man checkpoint and to enforce quarantine rules in the communities because we are on the side of preventing the transmission of the virus,” the task force commander said then.

“All government agencies are working together to address the COVID-19 pandemic. On the law enforcement side, we assure the public that the JTF COVID Shield is working 24/7 to prevent the transmission of the virus and eventually save as many Filipinos from the infection,” he added.

SWS: Hunger among Filipino families at highest since 2012

Nograles: Safety measures must be in place before select provincial bus routes reopen

Palace hopeful 2021 budget bill will be passed on time