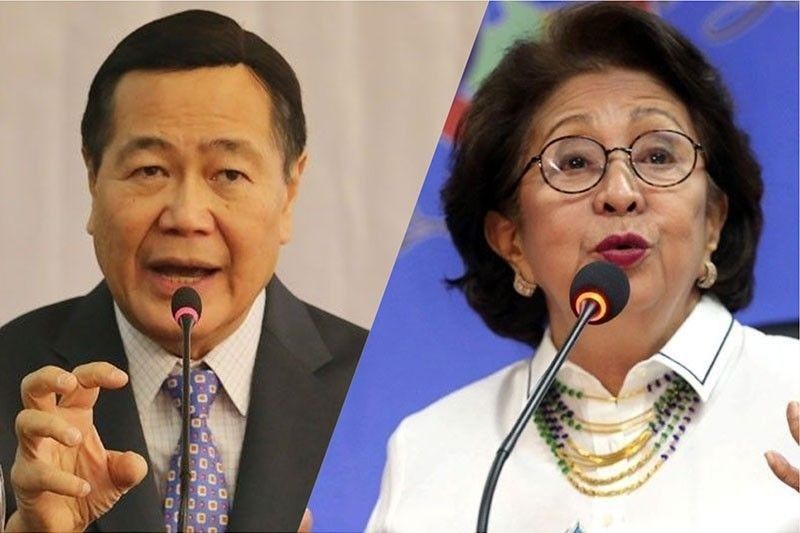 That Mendoza moved, in the Comment he asked the SC to admit, for the dismissal of the petitions shows that his “offer of friendly advice” to the SC in resolving the petitions but a motion to intervene, the group of petitioners led by the Carpios said.

In a Manifestation with Opposition and Reply, the Carpios also said Mendoza failed to satisfy the requirements to participate as amicus curiae in the cases.

A separate petition filed through the Free Legal Assistance Group also sought the denial of Mendoza’s Petition for Leave. They said that Mendoza is seeking to intervene in the case as a third person and not to serve as a “friend of court.”

FLAG also called Mendoza’s submission as “frivolous and dilatory,” and “disruptive to the orderly administration of justice” as it further adds to the already voluminous records the SC is resolving.

READ: Cheat sheet on the looming legal battle on the anti-terrorism law

Mendoza’s experience not relevant to case

In his petition, Mendoza cited his 14 years of working as a solicitor general during the Martial Law rule of the late dictator Ferdinand Marcos Sr. where he attended to the more than 500 hearings and filing of return of writs for the petitions for habeas corpus.

But the Carpios said this experience is not relevant or pertinent in the present petitions. Mendoza was never involved in the enactment of the Human Security Act of 2007, which the ATA repealed.

“His record of defending the [Arrest, Search, and Seizure Orders] issued by the Marcos dictatorship may be extensive, but unless the OSG agrees that present circumstances have placed the nation under Martial Law, would be out of point,” they said.

The FLAG petition, meanwhile, said that while they acknowledge that Mendoza “has served for decades as solicitor general during the Marcos dictatorship and has extensive experience in defending repressive acts and policies,” this is not the experience that the SC is looking for in an amicus curiae.

The petitioners also said Mendoza does not offer “unique information or perspective” that can help the court beyond what the lawyers of the parties can provide.

“His ‘perspective’ on Martial Law matters is far from unique, in fact the current OSG and the various parties and counsel in this case include persons whose habeas corpus and Martial Law experiences are more direct and personal than what Atty. Mendoza offers,” they said.

The Carpios pointed out that the anti-terrorism law is facing challenges from broad networks, from Framers of the Constitution, retired justices, lawmakers, law practitioners, law academe, religious and ethnic minorities, free press, labor groups and the military.

“With what is already available, Atty. Mendoza (who at best, possesses tangential experience on the matter at hand, and merely banks on the graciousness that this Honorable Court will accommodate his unsolicited Petition for Leave), does not, with respect, add value to the instant proceedings,” they said.

Not a ‘friend of Court’

The petitioners also pointed out that Mendoza had asked the SC to dismiss outright the petitions and this “casts doubt on his ability to be impartial and serve as amicus curiae.”

In his Comment, Mendoza said the petitions “do not sufficiently allege, much less show, that the petitioners have committed any act in violation of the Anti-Terrorism Act thereby creating an ‘actual controversy’ involving a legally demandable and enforceable right for the exercise of judicial power under Section 1, second paragraph, of Article VIII of the Constitution.”

They also pointed out that Mendoza asked to be a “friend” of Court, while the SC has yet to determine the issues—if any—it needs help to resolve. “In fact, it may be reasonable to characterize his Comment more as an usurpation of the OSG’s and this Honorable Court’s prerogatives than an honest intention to help the Honorable Court,” the petitioners added.

The Carpios also pointed out that Mendoza has always stood on the side of government, making his neutrality “suspect” and disqualifying him from serving as “friend of court.”

They added that Mendoza filing the Petition for Leave “belittles the able representation” by the OSG, led by Solicitor General Jose Calida who has successfully defended at least nine cases before the SC.

There are more than 30 constitutional challenges to the anti-terrorism law. The SC had earlier set these petitions for oral arguments but have yet to announce a date on when this will be held.