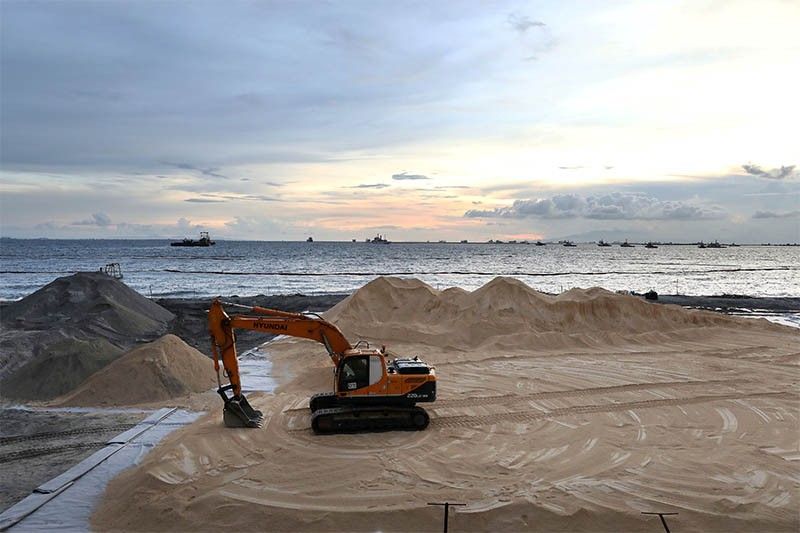 A bulldozer is seen working on the “white sand”—actually crushed dolomite rocks—poured along the shoreline of Manila Bay on September 6, 2020.

MANILA, Philippines — No untoward incidents will result from the overlaying of artificial white sand along the shore of Manila Bay, the Department of Health said Wednesday, two days after it cited the health risks posed by crushed dolomite rocks.

Tons of crushed dolomite rocks are being used to fill a stretch of Manila Bay’s coastline as a part of the government’s effort to rehabilitate the bay.

‘Where were they?’: What groups have actually been doing to save Manila Bay

In an online briefing Monday, DOH Undersecretary Maria Rosario Vergeire said that dolomite, once it becomes dust, can cause “adverse” effects mainly on a person’s respiratory system, if inhaled. Dolomite particles can also lead to eye irritation and gastro-intestinal discomfort such as stomach pain and diarrhea, if ingested.

But in a statement Wednesday, the department clarified that “dolomite in its bulk state is not a known health hazard and dolomite in dust form, like any other dust particle, can lead to symptoms such as chest discomfort, shortness of breath and coughing for this is our body’s normal reaction to irritants.”

It pointed out that the dolomite material being used to cover the baywalk is between two and five millimeters or 100 times bigger than dust.

“Therefore, [it] does not get suspended in air. Moreover, occupational health and safety standards for workers and precautionary measures for the containment of possible dust formation are being implemented,” the DOH said.

Safety warnings of companies in the United States said that inhaling dolomite dust may cause discomfort in the chest, coughing, damage to lungs and even cancer.

“Therefore, in terms of the general safety of the public who will be enjoying the shoreline once permitted, DOH assures that no untoward incidents will occur as a result of this endeavor,” it added.

Vergeire said Monday that the Department of the Environment and Natural Resources would not have implemented the project if they did not study that this will cause harm to the environment and the people.

Groups opposing the dumping of artificial white sand said that the “ill-conceived” project failed to comply with environmental and cultural laws and could potentially harm not only the bay’s marine ecosystem but also communities in and around the area.