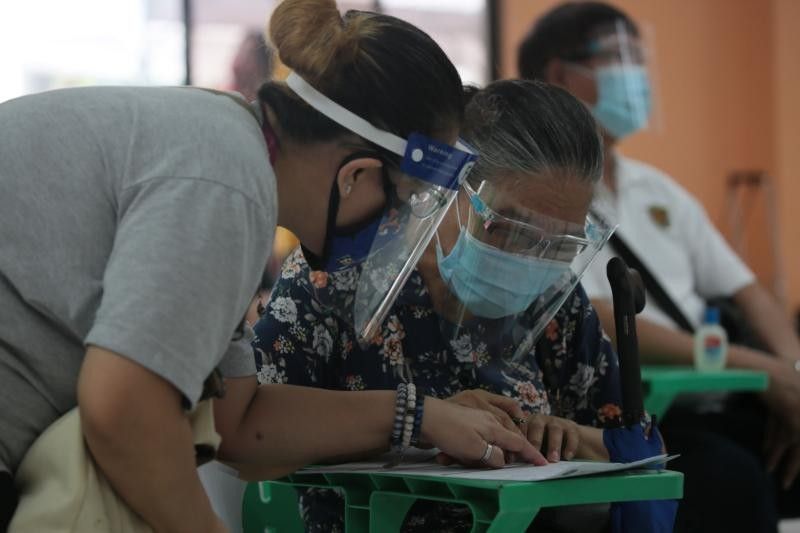 An elderly woman is seen getting assistance during voter registration in Pasig City in this file photo dated September 1, 2020.

MANILA, Philippines — On the 180th day since the first quarantine, health officials added 3,372 coronavirus cases and 20,472 recoveries to its running tally Sunday, bringing their totals to 261,216 cases and 207,568 recoveries.

In its latest tally update on Sunday afternoon, the Department of Health also recorded 79 more deaths from the sickness, bringing the new pathogen’s death toll in the Philippines to 4,371.

Meanwhile, there are still 49,277 active cases in the country, or patients still infected with the virus accounting for the casualties and recoveries.

Over the week, the national caseload increased by 23,851 cases since Sunday, September 6.

The department also warned the public earlier that its daily case reporting would be “irregularly high” in the coming days as more testing laboratories catch up with their daily reporting.

On Saturday, the Philippines also surpassed the 257,000-mark with 4,935 new infections.

Globally, 28 million have been afflicted with the new sickness, leading to over 911,000 confirmed deaths according to the World Health Organization’s latest bulletin.

The Philippines is still under the world’s longest quarantine as the government attempts to resuscitate the economy with another round of general community quarantine.