Doubt remains as experts back distancing reduction on public transport 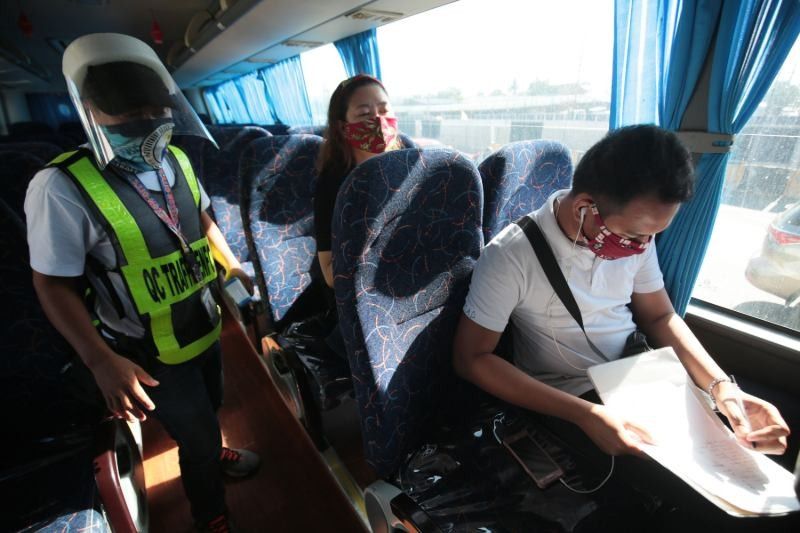 An airconditioned bus offers free rides to commuters along Commonwealth Ave. on the second day of general community quarantine in Metro Manila.

MANILA, Philippines — Opinions continued to clash over the Department of Transportation’s gradual reduction of physical distancing required on public transportation on Tuesday, the first day of the policy’s implementation.

In separate statements Tuesday, a group of health experts backed the move by transportation officials, arguing that following a slew of other minimum health standards would make up for the smaller physical distance.

The doctors in their statement prescribed what they called the “seven commandments to revitalize the country safely,” which they said were presented to members of the government’s coronavirus task force, namely:

“By imposing these strict measures, we believe we can gradually relax social distancing rules, in order to double or even triple our current public transport capacity, without compromising public health…While WHO recommends keeping a distance of 1 meter from other passengers to the extent possible, it allows for adjustments based on context,” the group’s statement read.

“Given our other recommended health interventions, we propose the gradual reduction of the physical distancing norm during transit to 0.5 meters or lower. Based on our review of the scientific literature and the policies and experiences of neighboring countries, we believe the evidence shows physical distancing can be maintained below 1 meter, so long as other health measures are also implemented,” it also said.

NGO: Clamor is for transport, not reduced distancing

In a separate statement, a research non-government organization Action for Economic Reforms slammed the DOTr claim that the move was prompted by the public’s clamor for public transportation relief, calling instead for “strategies [that] increase the capacity and efficiency of public transport without breaching physical distancing protocol.”

The NGO echoed the sentiments of the Move as One transport coalition, which earlier urged the department in a position paper to focus on providing alternative transport options mandated in the recently passed Bayanihan 2 Law, such as service contracting and active transport infrastructure, among others.

“We acknowledge that there is a need to open the economy. The lack of public transport must be addressed in order for people to be able to work and provide for their families. However, the loosening of physical distancing endangers the lives of commuters and risks the resurgence of cases, thus undermining the goal of recovering the economy,” their statement read.

“Given that we are still at a most critical stage in fighting COVID-19, we cannot be complacent by loosening physical distancing. We reiterate our previous point that this is a kind of signaling that things are now normal, and behavior on a bus or train will spill over to behavior in other places,” it added.

Transportation officials for their part reiterated in an earlier Philstar.com story that the policy had already been approved by the Inter-Agency Task Force on Emerging Infectious Diseases, of which the department is an attached agency.

READ: ‘We might go back to ECQ’: Año says reduced physical distancing in PUVs ‘dangerous’

Its counterparts in the health and interior departments though have also expressed caution over the idea, pointing to the health risks it could bring.

“The public clamor is for the supply or availability of public transport, not the reduction of physical distancing…There is a need to address the lack of available public transport by allowing more public utility vehicles to operate and providing safe alternative transport options, rather than loosening our safety guidelines,” AER also said in its statement.

President has nothing to hide, Roque says

How exactly does a party-list select its nominees?