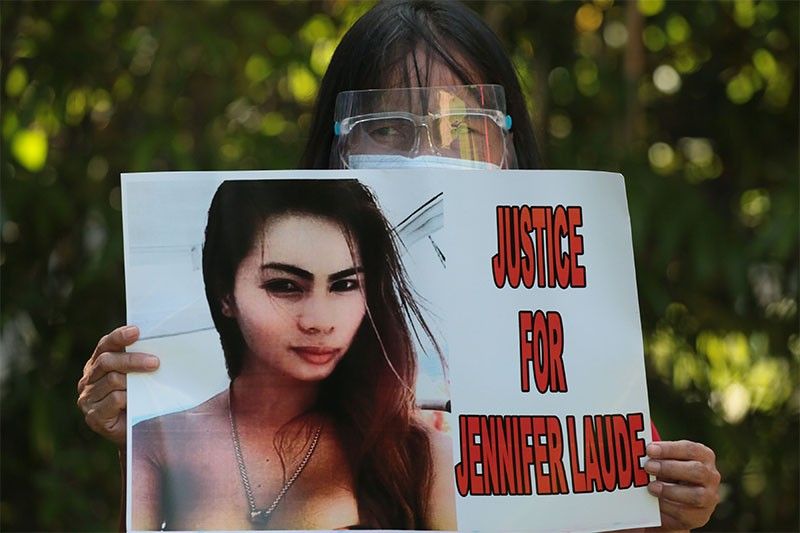 Various groups picket at Commission on Human Rights on September 11 as they denounced the pardon given to US Marine L/Cpl. Joseph Scott Pemberton

MANILA, Philippines — President Rodrigo Duterte has once promised the family of slain transgender woman Jennifer Laude that her killer will not walk free under his government, but the chief executive reneged on his promise.

In a statement sent through their lawyer Virginia Suarez, Nanay Julita Laude expressed her grievances over Duterte’s surprise move to grant Pemberton an absolute pardon.

(I bear ill feelings because I thought that when he becomes the president, he who helped me and said he will fight for us, and he extended financial help before.)

Rappler earlier reported that according to presidential spokesman Harry Roque, Duterte extended financial assistance to the Laude family for at least three times.

(He said that so long as he is in position, he will never allow Pemberton for release.)

Nanay Julita said they would have been okay if the pardon was not granted, because they would still have fighting chance then. Lawyer Suarez had already contested the Olongapo court’s earlier release order for Pemberton when the pardon was granted.

She stressed that their family only wanted ten years of imprisonment for their child’s killer.

(We were only asking for ten years of imprisonment as payment for the life of my child. Only ten years! A period too short in exchange of my child’s life.)

On September 1, the Olongapo Regional Trial Court Branch 74 ordered the Bureau of Corrections to release Pemberton from detention—nearly six years since the killing of Laude.

The court held that Pemberton is entitled to be released after serving the ten year maximum of his penalty. This was after the court accredited 1,288 days—following the computation of Pemberton’s legal team— as time allowances for his good behavior while in detention.

Suarez and state prosecutors from Olongapo filed their respective motions for reconsideration to contest the court order and argue on issues surrounding Pemberton’s GCTA.

But the fight of the Laude family and government lawyers has been rendered moot by Duterte’s grant of pardon—a move that caught his Justice Secretary Menardo Guevarra and US Ambassador Sung Kim in apparent surprise.

Duterte, who has ranted about the US’s supposed effort to impose its will on other countries, explained that he is not siding with anyone when he made the decision. He said that Pemberton was not treated fairly by the government.

Guevarra said he believes the president has his own basis for arriving at the decision to grant Pemberton and allow him to walk free.

Pemberton is now undergoing deportation process, after which, he will be allowed to board his flight back to the US.

READ: Pemberton to remain in military compound while BI takes over custody for deportation processing