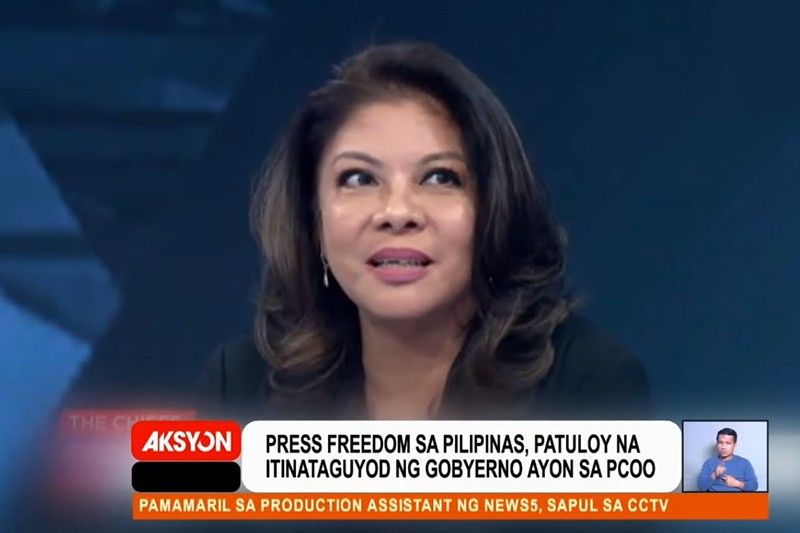 The National Union of Journalists of the Philippines in an Oct. 6, 2019 statement said Communications Undersecretary Lorraine Badoy is accountable for any harm caused by her claim that NUJP and progressive media outfits are “terrorist” communists.

MANILA, Philippines — The House Committee on Appropriations suspended hearings on the budget for the Presidential Communications Operations Office on Wednesday after lawmakers under the Makabayan bloc slammed PCOO exec Lorraine Badoy for her red-tagging of government critics.

Rep. France Castro (ACT Teachers Party-list) called for the suspension, saying Badoy, who was present at the meeting, needed to first respond to comments made against her under oath.

As a result, the budget hearing for the presidential communications staff will remain “suspended until further notice.”

“If it is so easy for this unelected official to make accusations against elected officials and they are asking for a budget here, then Mr. Chair, we cannot allow that. This is not only an affront to us, but I think this is an affront to the institution,” Rep. Carlos Zarate (Bayan Muna Party-list) said in Filipino.

“We may differ in position on many issues, but all of us are here in this Congress because we are elected by our constituents. And this unelected factotum should respect that,” he added.

Badoy was quoted in a GMA News report as saying that Makabayan Bloc members were “high-ranking party members” of the Communist Party of the Philippines whose goals are to weaken the government until it is totally destroyed so that the CPP may topple our democracy and install, in its place, communism.”

To recall, Badoy has publicly accused both registered lawmakers, academics, journalists and government critics of being communist rebels on more than one occasion in the past and in her official capacity as presidential communications undersecretary.

INTERAKSYON: PCOO’s Lorraine Badoy tried to red-tag a think tank on a show. Here’s what happened next.

“I take offense that she is using her position, using government funds, to attack our person and encourage the trolls to attack not only our person but even our family,” Zarate also said.

In response to the lawmakers, PCOO secretary Martin Andanar said: “That is her own post on her page, and that should not affect the rest of the PCOO including the agency’s budget because these agencies, these monies, is for the Executive branch to be able to disseminate info especially during a pandemic.”

The Palace communications team itself has also been caught in a lie in the past, washed its hands of a social media post in May that claimed, incorrectly, that ABS-CBN’s “request for franchise renewal was disapproved” because of legal issues raised against the network. — FrancoLuna