Pemberton blacklisted from returning to Philippines after deportation 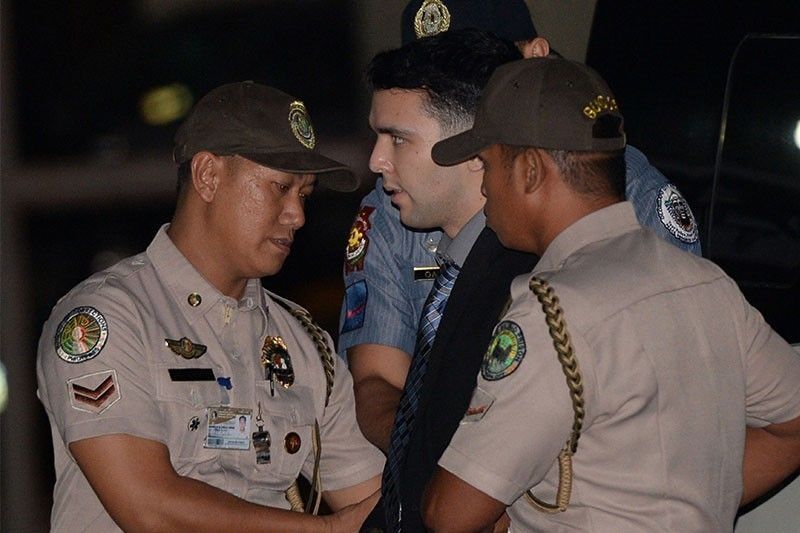 In this file photo taken on Dec. 1, 2015, US Marine Lance Corporal Joseph Scott Pemberton (C) is escorted by Philippine policemen shortly after arriving at Camp Aguinaldo in Quezon City, from Olongapor city where a court convicted him of homicide for the killing of Jennifer Laude in a motel in October 2014.

Philippine President Rodrigo Duterte has granted an absolute pardon to a US marine convicted of killing a transgender woman, officials said on September 7, 2020, drawing condemnation from rights groups.

MANILA, Philippines — United States Marine Joseph Scott Pemberton, convicted killer of Filipino transwoman Jennifer Laude, will be blacklisted by the Bureau of Immigration from returning to the Philippines following his deportation, according to the Department of Justice.

Justice Undersecretary Markk Perete on Saturday told reporters that Pemberton is blacklisted on top of his deportation order.

Related Stories
Deportation proceedings vs Pemberton may be finished this weekend, Guevarra says

“Under the rules, a person blacklisted on the basis of moral turpitude may apply to lift the order of blacklisting 10 years after its implementation,” Perete said.

“His order for deportation is based on a finding of undesirability on account of the commission of a crime involving moral turpitude (homicide).”

“Required documents have already been submitted, but his final flight details and preparations for implementation have yet to be discussed,” Sandoval said.

Pemberton will remain in his detention facility in Camp Aguinaldo while his deportation is being processed.

Controversy erupted after President Rodrigo Duterte announced Monday that he is granting absolute pardon to Laude’s murderer, saying that the American convict had been “treated unfairly” in his application for Good Conduct and Time Allowance.

— With reports from Kristine Joy Patag