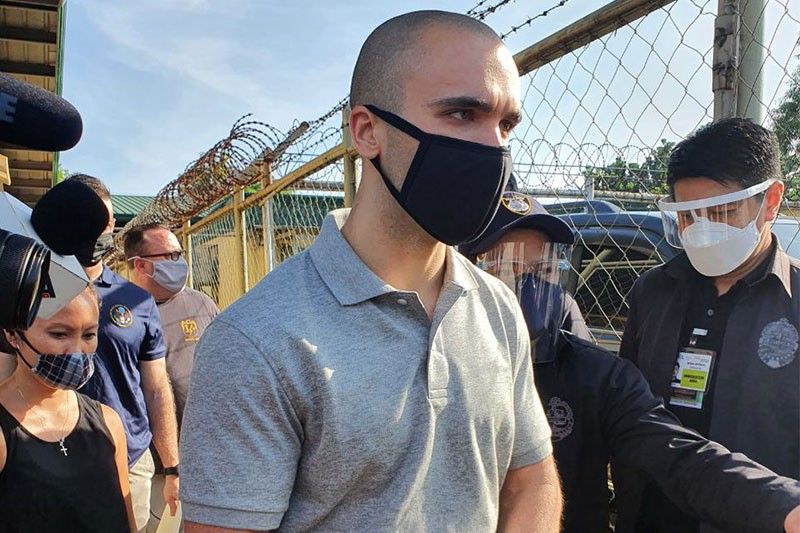 Convicted American soldier Corporal Joseph Scott Pemberton leaves his detention facility at Camp Aguindaldo in Quezon City prior to his flight back to the US.

MANILA, Philippines (UPDATE 2: 11:25 a.m.) — US Marine Joseph Scott Pemberton, who was earlier convicted for the murder of Filipino transgender woman Jennifer Laude, was deported from the country Sunday, the Bureau of Immigration confirmed.

In a text message sent to reporters, BI spokesperson Dana Sandoval said that Pemberton was deported via a military plane that left at exactly 9:14 a.m. on Sunday morning.

Pemberton, a Private First Class at the time, was the prime suspect in the case of Laude, whose body was found battered in an Olongapo lodge in October 2014. He has since been blacklisted from returning to the country following his deportation.

Foreign Affairs Secretary Teodoro Locsin Jr. announced he was granted absolute pardon by President Duterte on Tuesday night in a tweet, triggering outrage on social media. This was confirmed by no less than presidential spokesperson Harry Roque, who also formerly served as Laude’s lawyer, later Tuesday.

The deportation order on Pemberton “is based on a finding of undesirability on account of the commission of a crime involving moral turpitude,” the justice department said earlier.

Justice Undersecretary Markk Perete on Saturday told reporters that Pemberton is blacklisted on top of his deportation order.

“Under the rules, a person blacklisted on the basis of moral turpitude may apply to lift the order of blacklisting 10 years after its implementation,” Perete said. “His order for deportation is based on a finding of undesirability on account of the commission of a crime involving moral turpitude (homicide).

In a statement, BI Commissioner Jaime Morente disclosed that the US marine had already long been included in the bureau’s blacklist since September 2015 when he was ordered deported by the bureau’s Board of Commissioners for being an undesirable alien after being charged for murder and convicted of homicide.

The resolution at the time concluded that Pemberton’s continued presence in the Philippines is not conducive “for the safety, welfare, happiness, or good order of Philippine society.”

According to Morente, Pemberton was made to undergo regular booking procedures and coronavirus tests and was “required to secure clearances from the appropriate offices, as well as to present a travel document, and outbound travel arrangements, before being deported.”

“Upon completion of the required documents, we immediately implemented the deportation…He was escorted by BI agents to ensure that he has boarded his aircraft. Should he attempt to re-enter the country after being deported, he will be denied entry and will be excluded,” he added.

The Commission on Human Rights also slammed Duterte’s pardon earlier this week, calling it an affront to the victim’s family and the wider LGBTQI community.

Both the national police’s own reports along with the country’s LGBTQI community at large classify the incident as a hate crime. In his testimony, Pemberton referred to Laude as “it”, saying: “I choked it, wrapped my arms around it until it stopped moving, and dragged it towards the bathroom.”

In a statement released by his lawyer Rowena Flores, Pemberton called Duterte’s pardon an “act of compassion” for which he was “extremely grateful.”

“To the family of Ms. Jennifer Laude, he (Pemberton) extends his most sincere sympathy for the pain he caused. In the years he spent in confinement, he spent much time contemplating the many errors in his ways regarding the night of October 11, 2014,” the statement read.

“He wishes he had the words to express the depth of his sorrow and regret.”

An Olongapo has granted the motion of US Marine Lance Corporal Joseph Scott Pemberton, who was convicted of killing transgender woman Jennifer Laude in 2014, for an early release through the Good Conduct Time Allowance law.

Laude’s family, however, has filed a motion for reconsideration, saying the convicted killer failed to show proof of good conduct. — AFP

The US Embassy in Manila stresses that all legal proceedings on the “absolute pardon” of convicted American soldier Joseph Scott Pemberton took place under Philippine jurisdiction and law.

“Lance Cpl. Pemberton fulfilled his sentence as ordered by Philippine courts and he departed the Philippines on September 13,” the US Embassy says in a statement.

Lawyer Rowena Flores says Pemberton also extends his sympathy to the family of Jennifer Laude “for the pain he caused.”

“In the years he spent in confinement, he spent much time contemplating the many errors in his ways regarding the night of October 11, 2014. He wishes he had the words to express the depth of his sorrow and regret,” Flores says in a statement.

Convicted American soldier Joseph Scott Pemberton has been placed on the blacklist of the Bureau of Immigration as a consequence of the deportation order against him.

BI Commissioner Jaime Morente says Pemberton is perpetually banned from coming back to the Philippines.

“The Bureau saw that he is a risk to public safety, having been found guilty of the crime. Hence he was tagged as an undesirable alien, and will be expelled from the Philippines,” Morente says.

Virginia Suarez, lawyer of the family of slain transgender woman Jennifer Laude, says she hopes convicted killer Joseph Scott Pemberton may find peace of mind as he returns to the United States.

“May he find peace of mind. Hoping he has learned from all these the value of life and dignity regardless of gender and nationality,” Suarez says.