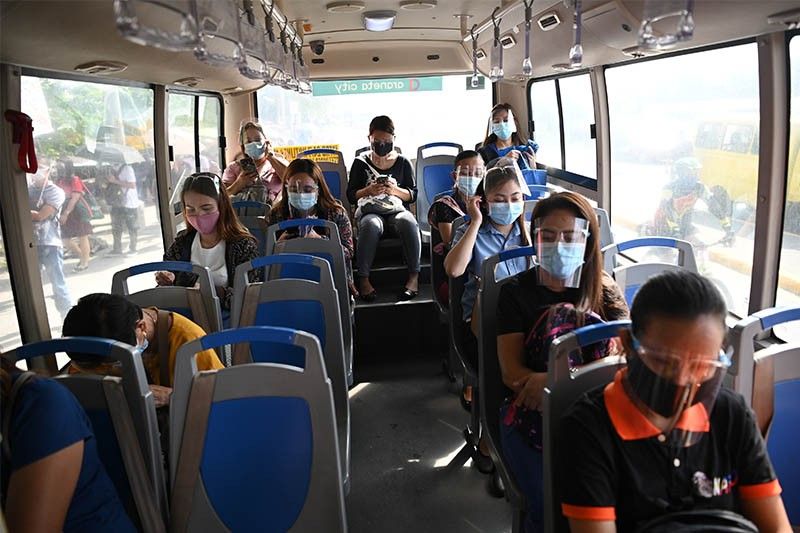 This photo taken on September 8, 2020 shows passengers sitting apart as part of health protocols imposed by authorities on public transport against COVID-19 coronaivurs, as they ride on a bus in Manila.

The Department of Health reported 3,544 additional COVID-19 infections, of which 90% occurred within the last two weeks.

Metro Manila was the source of only 19% or 690 of the newly-reported cases. Provinces that also registered high number of additional infections were Cavite (305), Rizal (201), Negros Occidental (173) and Bulacan (98).

The DOH also listed 34 new fatalities related to the severe respiratory illness, raising the nation’s death toll to 4,663. The day before, it logged 259 deaths—the highest in a single day.

A bulk of the newly-reported deaths took place in September. Only three deaths occurred in August, while two deaths were from the months of April and May.

Among the newly-added deaths, 13 were from Metro Manila, followed by 13 in Calabarzon and three each in Cagayan Valley and Central Visayas.

A total of 207,352 people in the Philippines have survived COVID-19 after 395 more individuals were added to the list of recoveries.

But the DOH said there were 538 cases that were previously reported as recovered but turned out to be two deaths and 536 active cases after final validation.

Active cases stood at 57,392, which represented 21% of the nation’s confirmed cases.

COVID-19 cases in the country appeared to be on a declining trend in the first few days of September. But spikes in daily cases were observed starting last week.

335 persons displaced by ‘Pepito’ in Aurora

Duterte says he could be responsible for drug war deaths

Some of the 3,818 beneficiaries of Social Amelioration Program in Brgy. Pasong Tamo in Quezon …