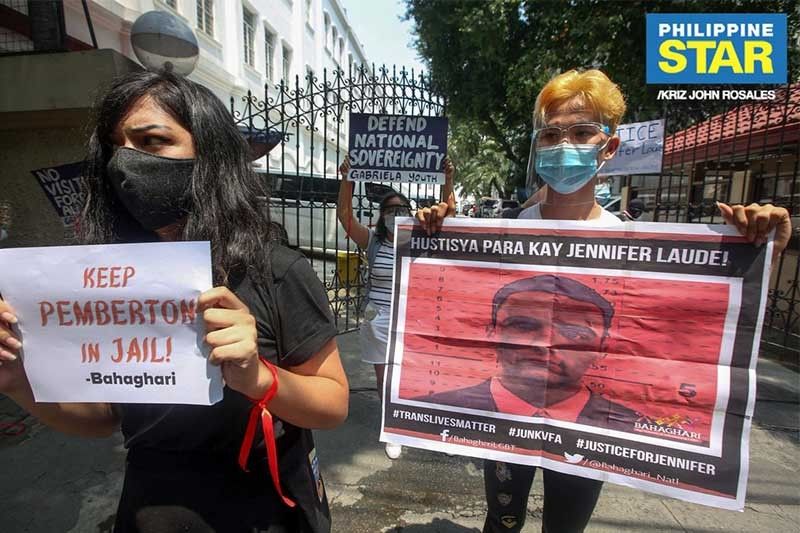 LGBTQ+ rights group Bahaghari and other progressive groups held an indignation rally in front of the Department of Justice office in Manila on September 3 to condemn the court’s early release order for US Marine Joseph Scott Pemberton.

MANILA, Philippines — The lawyer of US Marine L/Cpl. Joseph Scott Pemberton said presidential spokesperson Harry Roque should stop commenting on the proceedings on the imminent release of the American serviceman.

“The spokesperson for the president should be stopped from further making statements in this case because he is a person of power now,” lawyer Rowena Garcia-Flores, counsel of Pemberton, told ANC on Friday.

Flores said that Roque’s remarks “may be construed rightly or wrongly as something coming from the president,” and may also be seen as “trying to influence the outcome of the motion before the trial court.”

Roque stood as one of the counsels of the Laude family during the trial of Pemberton.

An Olongapo court earlier this week ordered the early release of Pemberton after it accounted the time allowances he earned for his behavior while in prison. The court held that taken with his 2,142 days in prison, he would have served 10 years, one month and one day—or more than his 10-year sentence.

The lawyers of the Laude family have since filed a motion for reconsideration on the court order.

On the day that it was reported that Pemberton was due for early release, Roque wrote in a tweet: “As former Private Prosecutor for the Laude family, I deplore the short period of imprisonment meted on Pemberton who killed a Filipino under the most gruesome manner. Laude’s death personifies the death of Philippine sovereignty.”

Meanwhile, in a briefing at the Malacañang on Thursday, Roque stressed that the grant of GCTA is a function of the executive branch.

(It seems that the court’s decision runs counter to the recommendation of the Bureau of Corrections… So what the judge did that she ruled on how to give credit for good conduct is an instance of judicial overreach.)

The corrections bureau has since put on hold processing Pemberton’s release.

Flores on Friday morning filed an opposition to the appeal of the Laude family and has asked the court to dismiss their motion for reconsideration for lack of merit.

“To treat Pemberton differently from the around 20,000 inmates who have benefited from the GCTA Law since 2013, when there exists no substantial distinction between them to justify different treatment is tantamount to asking the Honorable Court to disregard the constitutional guarantee of equal protection of laws,” their pleading read.

2020-09-03
AtinitoAdmin
Share
Previous How Isabelle Daza handled scary episode of her son Balthazar having a seizure
Next Girl interrupted: Mulan and other female-led films endeavour to reach audiences during COVID-19