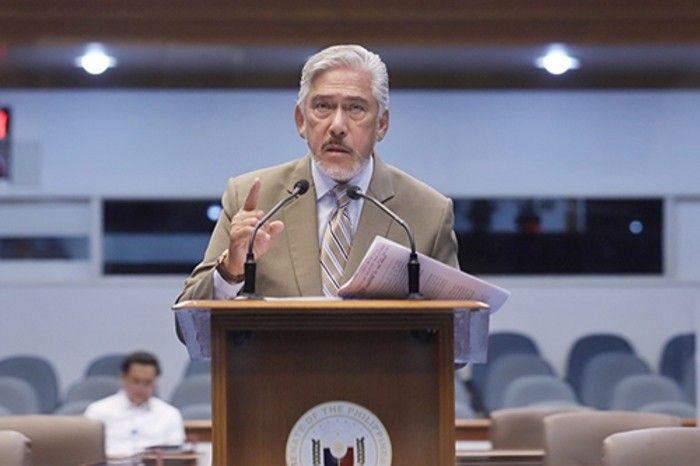 Senate President Tito Sotto takes the floor on September 1, 2020, to sponsor the Committee of the Whole report on its investigation on the alleged rampant corruption, incompetence and inefficiency in the Philippine Health Insurance Corporation (PhilHealth) amid the COVID-19 pandemic.

This comes after lawmakers at the House of Representatives, during a joint hearing on alleged anomalies and corruption in PhilHealth proposed granting the chief executive emergency powers to reform the embattled state-run agency.

“I do not know what is incorporated or included in their proposal…and what kind of emergency powers they would give because as far as we are concerned, most of us in the Senate is concerned, we know that in this part of the globe, the president of the Philippines is the most powerful president,” Senate President Vicente Sotto III said during an interview with CNN Philippines.

According to Sotto, it is the Senate’s view that “anything [the House] would want the president to do, he can [already] do now.”

“If we see something that he cannot do now in order to let’s say revamp, reorganize or whatever he can do in PhilHealth, then, yes, by all means, let’s give it to him but if it is in his powers, why else?” Sotto said in Filipino.

“There is no use for emergency powers. We will oppose it in the Senate. The president can reform and reorganize PhilHealth without emergency powers from Congress,” Drilon said Thursday.

“The president has vast power under the Constitution and existing laws to reorganize and solve corruption in PhilHealth. He appoints the members of the Board. He can file administrative and criminal cases against erring and corrupt officials. He can order the suspension or transfer of personnel in the entire executive,” he added.

The Senate on Tuesday bared its Committee of the Whole Report which recommended the filing of criminal and administrative charges against several executives of PhilHealth.

In adddition to recommending the filing of charges against Health Secretary Francisco Duque III, who sits as PhilHealth chairman of the Board, the upper chamber in their report also urged that the president replace him as the country’s top health official.

Even before the Senate’s probe into the alleged corruption and mismanagement of PhilHealth’s executives, over half of its members had already called for Duque’s resignation over his handling of the country’s COVID-19 response.

Duque, who continues to enjoy the president’s trust, according to Malacañang, virtually attended the House panel hearing on Wednesday and backed the proposal to grant the president emergency powers.

Duterte can reorganize PhilHealth without going to Congress

“Congress has already delegated to the president, by virtue of RA 10149, the power to reorganize PhilHealth,” Drilon said, referring to the GOCC Governance Act, which he authored.

According to Drilon, the law already gives the chief executive vast power to reform and reorganize government owned and controlled corporations (GOCCs) through the Governance Council for GOCCs (GCG).

Section 5 (a) of the act provides that the GCG has the power to “evaluate the performance and determine the relevance of the GOCC, to ascertain whether such GOCC should be reorganized, merged, streamlined, abolished or privatized.”

“Upon determination by the GCG that it is to the best interest of the State that a GOCC should be reorganized, merged, streamlined, abolished or privatized, it shall implement the reorganization, merger or streamlining of the GOCC, unless otherwise directed by the President,” Drilon added.

He further urged his calls for the GCG to exercise its mandate, saying that the law which created the council “was intended to reform the government corporate sector, improve corporate governance of GOCCs, and exact from them efficient and effective public service.”

The Senate minority leader renewed calls he made last week for more active participation from the GCG in the process of appointing PhilHealth executives.

“The fit and proper rule should be strictly applied – the directors must be chosen based on their integrity, experience, education, training and competence, among others. This is to ensure that only the most competent people are appointed as Directors of the national insurance agency,” Drilon said.

He added that the GCG should ensure that appointments are compliant with the Universal Healthcare Law, Section 14 of which says that any PhilHealth president and CEO recommended by the Board “must have at least seven years of experience in the field of public health, management, finance, and health economics or a combination of any of these expertise.”

In addition to this, Drilon said that the GCG “must review and implement the limits to the compensation, per diems, allowances, and incentives” of PhilHealths executives.