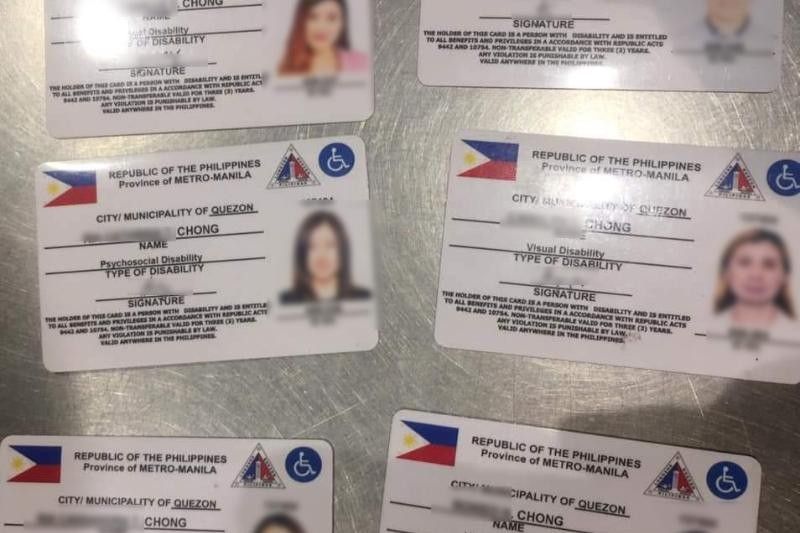 MANILA, Philippines — Members of a family whose six persons with disability (PWD) identification cards spread on social media earlier in the year may face charges after a House panel found none of them were qualified for the card, which gives bearers discounts and priority seating.

This was confirmed by Rep. Ronnie Ong (Ang Probinsyano Party-list), who co-wrote the original House resolution calling for a probe into the proliferation of fake PWD cards, in a phone call.

“With regard to the Chongs, Quezon City has said it would take legal action against not only the Chongs but also the PDAO (Persons with Disability Affairs Office) officers who issued their cards…We will just leave the action to the Quezon City local government. They have said they will file cases through the NBI and through its legal office,” Ong said.

“The fact that they are thinking or they are about to file a case against them means that the cards are probably not legal.”

Philstar.com reached out to the Quezon City Legal Department Office for confirmation but the office declined to comment.

Disputing the findings of the Quezon City local government, Carolyn Chong, the family matriarch, said in an affidavit that the six cards—which entitle holders to a 20% discount and exemption to value-added tax to go with a 5% discount on basic necessities and prime commodities—were legitimately acquired.

Earlier in June, Quezon City Mayor Joy Belmonte said that the six cards, a photo of which went viral on social media, were not supported by application forms or other documents on record with the local government. Quezon City legal officer Niño Casimiro also said then that their release may have been “facilitated” by a city employee during the previous administration.

The city government has said that the family allegedly paid P2,000 each for the said IDs.

“We never abused the use of our PWD cards. We have never used the PWD cards to cut into queues or to use a parking slot allotted for PWDs. I believe that there are people who are less mobile who should avail of these parking slots. My children and I only use the PWD cards within the parameters of the law,” she also said.

The same affidavit was presented in a hearing of the House special committee on persons with disabilities on Thursday, August 27. The Chong family had been invited to the hearing but they did not attend.

In the affidavit, Chong claimed that she and her children “have visual issues but in (sic) varying extent.” She said that one child has astigmatism while three of them are nearsighted. She also admitted that she checked the “psychosocial disability” category for her youngest child, though the basis for this is not explained at any point in the document.

Many people have astigmatism and other conditions that are corrected with the use of glasses or contact lenses.

“As for myself, I have been wearing eyeglasses since elementary,” she wrote, also admitting that her children were not actually present at the interview and processing for the issuance of their IDs at the Quezon City Persons with Disabilities Affairs Office.

“[S]ome of them were in school while some were at work, which is why they were not able to personally submit their documents…I was also in the honest belief that the children did not have to appear anymore since it was their mother who was personally processing the applications on their behalf.”

“The doctor checked our eyes and issued each of us a medical certificate. Unfortunately, I cannot recall anymore the identity of the doctor,” Chong said.

“I do not personally know anyone at the Quezon City PDAO, nor did I ask for any endorsement from anyone to secure special assistance or preferential treatment. I also did not give any amount to anybody inside or outside the PDAO. Neither did anyone ask for any money while I was processing the application,” she added. 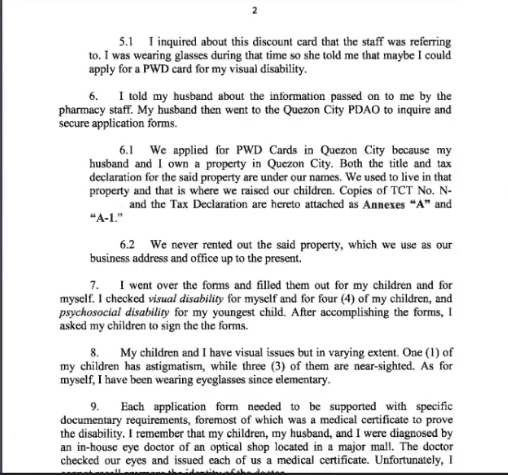 Screengrab shows a copy of the Chong family’s affidavit submitted to the House special committee on persons with disability.

According to Priscilla Cuevas, the representative of the Department of Health present at the hearing, neither astigmatism nor nearsightedness is actually included among the disability spectrum of visual issues that qualify a person to avail of a PWD ID and the benefits that come with it.

“Recently, we did a model disability survey using a more advanced way of classifying persons with disabilities and we found out that 12% of Filipinos in the country actually have severe types of disabilities,” she said.

At the same inquiry, Quezon City Persons with Disabilities Affairs Office officer-in-charge Renato Cada asserted the city government’s findings that the Chong family did not submit any of the supporting documents needed to avail of the PWD IDs.

Cada also said that it was not even authorized representatives of the city who signed on behalf of the PDAO, and no medical certificates or abstracts were presented to the office.

National Council for Disability Affairs Executive Director Emer Rojas, who was present at the hearing, hit what he said was the “discretionary” way of giving IDs within local governments, which he said also extends to medical certificates that were given by unauthorized doctors.

“Visual ailments for example should be issued by ophthalmologists and psychosocial disabilities are issued by psychiatrists, that’s the way it should be,” he said. “PDAO personnel aren’t doctors so as long as they see a medical certificate, they think they have already complied… We need accountability from them because anyone can give out cards.”

Sought for comment, the Quezon City local government said in a text message that no information can be disclosed on the case right now.

Earlier, Casimiro, Quezon City’s legal officer, also said that the city government would be focusing more on addressing the faulty processes in issuing cards rather than filing cases against the family and the personnel who “facilitated” the release of their cards.

Ong also said in an interview with Philstar.com on Thursday that the family should cooperate with the investigation if they are not guilty.

“I hope if what they’ve been saying since Day One is true, that they’re not guilty, then they can just forward their medical certificates to the committee to clear their name…they submitted an affidavit and that’s it. Just that,” he said.

“In the bigger picture, there’s really a lot of abuse of the cards…This law is really to help legitimate PWDs, but what happened is that more often than not, it’s affluent families that abuse it to get discounts,” he added.

At the hearing, Cada also disclosed that the PWD IDs of the Chong family were revoked. Ong said that Cada later said that they were “not actually revoked yet by the office because any actions that would be taken by the city government would go through its legal affairs office.”

The House resolution calling for a probe, penned by Ong and Rep. Eric Yap (ACT-CIS Party-list), raised concerns over the possible effects that fake PWD cardholders would have on local businesses amid the novel coronavirus lockdown.

“These fake PWDs are bad for businesses, especially for small ones. They are faking their disability and are abusing the PWD Law just to get discounts. Our business sector is barely surviving these days and it is the duty of the government to make sure that they are protected from these kinds of consumer abuse,” the two said then in a joint statement.

In a phone call with Philstar.com, Alex Mendoza, Quezon City Federation of Persons with Disability Inc. president, said that the proliferation of fake PWDs has long been an issue in the country and is nothing new.

“We can’t know how much of them are fake anymore because of how long it’s been and how many have applied since then. A lot of applicants really don’t show up personally, they have someone go for them instead because they know we’ll see that they really aren’t disabled…there are a lot of cases without supporting documents,” he said.

“As an issuing agency, PDAOs have the right to request for documents [from applicants.] My conservative estimate is that 25% of the PWDs we have right now are not qualified to have their cards,” he added.

For his part, Ong said: “I don’t agree with it, I think it’s higher. My rough estimate probably is 70% [of PWDs are fakes]. We’ve reached the situation where people are really just giving PWD cards away. It’s like, ‘Do you want a PWD card? I can get you one.’ They’ve made it into a discount card, which is really bad.”