It’s an untold story aching to be written. Hui Bon Hoa, a Vietnamese-French businessman, and his three sons were the real estate billionaires of old Saigon. But there’s more to this slice of history.

During a trip to Vietnam more than a year ago, I learned that there is a Filipino connection to this narrative wrapped in a love story.

It’s how Marcel Huibonhoa, son of Thang Phien, the youngest of the billionaire brothers, fell in love with Florencia “Poule” Tankeh, a young Filipino department-store heiress.

Marcel was in Manila as a tourist on his way to Paris for studies, when he dropped by Poulex Department Store at the Ermita, Manila Shopping Center. The store salesgirls couldn’t understand Marcel, who talked to them in Vietnamese and French. So they called their boss, Poule Tankeh, to talk to the shopper. Poule, who once studied in Belgium, could understand French.

Marcel shopped at Poulex, but what he wanted to really bag afterwards was the heart of Poule. He fell in love with the beautiful Filipina, and after a long-distance courtship, Marcel proposed to Poule after three months. Marcel and Poule married and had seven children, the second of whom is the beauteous Agnes Huibonhoa, well-known in Manila social and diplomatic circles as she is the consul general of Gambia to the Philippines. I sought her out and checked with her the story details which I read in a blog, written by Chen Bichun in 2014.

Hui Bon Hoa, known as the richest man in old Saigon, was born in 1845 in Fujian, China. At the age of 20, he left for Vietnam—then a French colony— where he worked at a pawnshop owned by a Frenchman, Antoine Ogliastro.

Hui Bon Hoa earned his first fortune by buying and trading antiques. He saw a good opportunity when the French government held an auction of 20,000 old radio devices. From experience, he had learned to classify the gold from the old.

He then bought the marshland where the French planned to build the Ben Thanh market. Eventually, he built 20,000 houses for rent there. By 1887, he had become a naturalized French citizen. His three Europe-educated sons — Thang Hung, Thang Chanh and Thang Phien — helped the patriarch grow the business, and were in fact acknowledged as the pillars of real estate in Saigon.

They built what is now the Ho Chi Minh City Fine Arts Museum — but still known to many as Uncle Hoa’s Mansion — which was then considered the city’s most luxurious building, combining eastern as well as western architecture. In the late 1920s, this building and the entire block became a complex of four buildings. They also had an island in Dalat and properties in Gulangyu, Xiamen.

Known for their generosity, the Hui Bon Hoas also offered low-cost housing to the less fortunate. They also provided the funding and the land for Tu Du Hospital.Another Saigon landmark that still exists today is the Hui Bin Hoas’ Majestic Hotel, built in 1925 in the French colonial style. It originally had 44 bedrooms in three storeys, but has since been expanded and renovated. 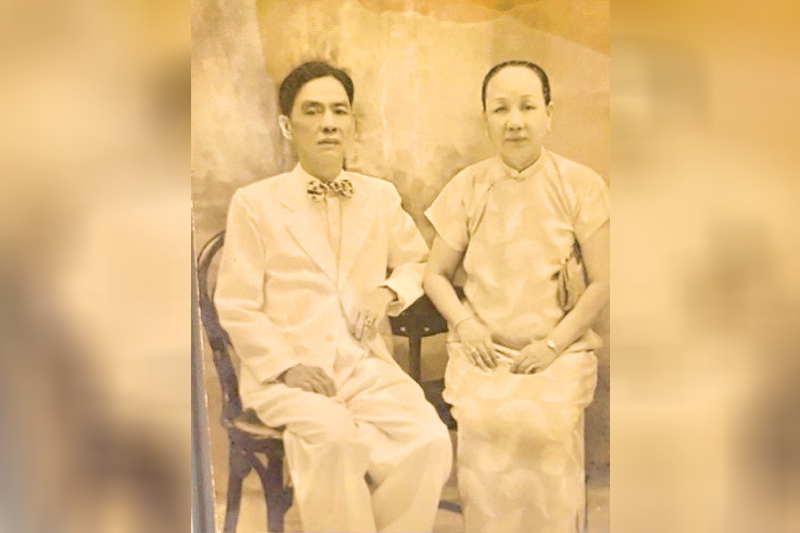 The Ama and Angkong of Agnes: The youngest of the three Hui Bon Hoa brothers, Thang Phien, was the grandfather of Agnes

Much of Saigon’s real estate flourished under the Hui Bon Hoa brothers for decades.It was a period of prosperity in Saigon, until Vietnam War, which started in 1955. After close to two decades of fighting, it was in 1973 that US President Richard Nixon signed the Paris Peace Accord ending US involvement in the Vietnam War. The war ended in 1975. But by 1975, the Hui Bon Hoas had left Saigon.

The buildings they left behind are part of a precious legacy that the current Hui Bon Hoa generation cherishes.

Agnes Huibonhoa says: “For me, Vietnam represents heritage. I am proud of my roots — and my father’s ancestry, which has enriched Vietnamese history and culture. Since childhood, I have been going with my family to Vietnam pay homage to my ancestors. The main exhibition space in the Ho Chi Minh City Fine Arts Museum, considered the most luxurious building in Nha Chu Hoa complex; it was constructed in 1929 and completed in 1934. The Hui Bon Hoas also have Dalat island in Vietnam and Gulangyu island in Xiamen, China.

“Vietnam sparks pride at my elders’ success. It gives me inspiration to work harder,” says Agnes, who is also a businesswoman. When her father died of a tumor when she was only eight years old, more so did Agnes embrace the value of work.

The Huibonhoa business genes, matched with the Tankeh brilliance, produced a work ethic that Agnes learned since childhood. She would spend summers helping with giftwrapping, cashier work and even merchandising at Poulex.

She recalls rice trading, an island resort development, logging in Indonesia, a shipping line, and even a deli/liquor store in California as among the businesses that her mother grew. It meant studying wherever family business would be, hence she attended high school at Bettendorf in Iowa and started college at Notre Dame University in Belmont California ,San Francisco.

How she ended up becoming consul of the Republic of Gambia is another story. On a holiday with family, Agnes met a business friend who convinced her to take a four-hour flight from London to Banjul, Gambia, to experience a safari. There they were invited to meet the president of Gambia, who asked her to help open diplomatic ties between Gambia and the Philippines. Perhaps her exposure to the political scene helped her embrace this diplomatic work. She worked as a staffer for her uncle, Teofisto Guingona, who joined the Senate slate of Cory Aquino and thereafter became Vice President and Foreign Affairs Minister.

“This experience gave me the opportunity to meet people from all walks of life, from the common people during senatorial campaigns to the visiting heads of state such as President Bush,” recalls Agnes.

Today, Agnes is committed to her advocacies, such as raising funds for cancer patients, helping out indigenous people in Barangay 409 Manila and promoting devotion to Our Lady of Manaoag through a chapel built in Sampaloc.“I feel that my life is so blessed that I must give back what I can to society,” says Agnes.

Is that the Huibonhoa blood running through her veins? Everytime Agnes passes through Hui Bon Hoa avenue in Saigon, she remembers that her Vietnamese father was part of the real estate industry pillars of Saigon. These pillars were founded on a soul of steel. And much heart. Poulex Department Store, one of the first buildings to rise in the Makati Commercial Center in the ‘70’s, was owned by the family of Poule Tankeh Huibonhoa

2020-09-11
AtinitoAdmin
Share
Previous Funeral arrangements announced for Oshawa family fatally shot by relative
Next Coronavirus: What’s happening in Canada and around the world on Sunday