After a cacophonous debacle in the first presidential debate, American voters were given a chance on Thursday to watch, without interruption, the candidates vying for high office.

Joe Biden and Donald Trump each had their own prime-time slot in town hall events on competing television networks.

The bizarre scene was triggered by an unusual turn of events, featuring a dispute over the debate format precipitated by Trump’s COVID-19 diagnosis.

It gave the frontrunner, Biden, a chance to speak at unimpeded length in a way he simply couldn’t in the first, insult-heavy, idea-light showdown with Trump.

And, with just three weeks to go before the Nov. 3 election, it may have delivered a late-campaign blow to a central Trump message about the frailty of Biden’s mental faculties.

The Democratic nominee was pressed on controversial topics like whether he would stop fossil-fuel fracking, or start expanding the Supreme Court.

Biden’s answers: No and maybe. 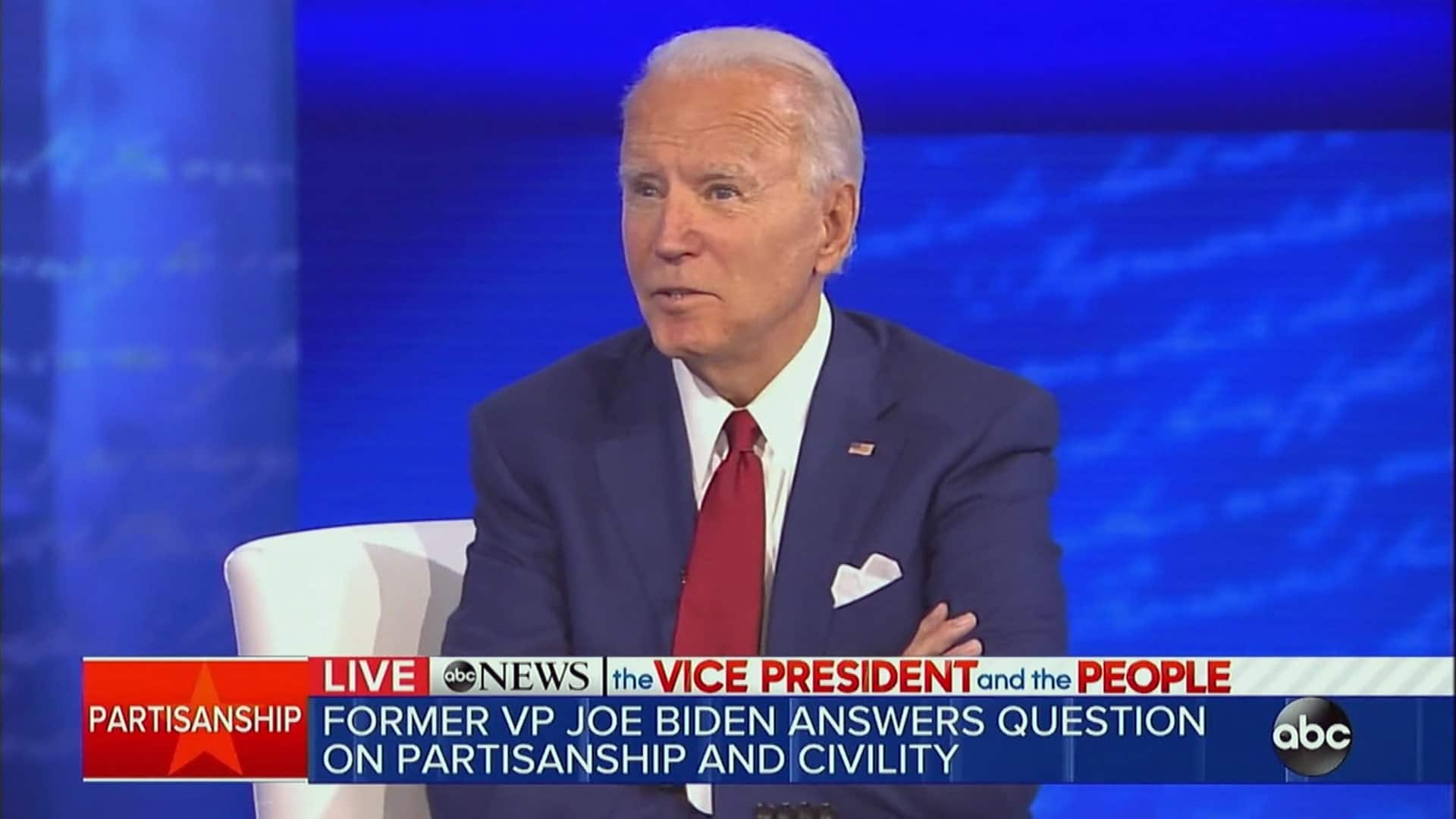 Biden responds to question on restoring civility in U.S. politics

Democratic presidential candidate says he will reach across the political aisle to work with Republicans if he wins the election.

He said he favours a shift to clean energy, but at a manageable pace, with hundreds of billions in incentives for green-infrastructure projects.

Biden said some progressive proposals to eliminate carbon emissions in power generation by 2030 are not possible: “You can’t get there,” he said. “You’re going to need to be able to transition.”

On the Supreme Court, the former vice-president hinted that he’s been dangling the possibility of packing the bench with new justices as a leverage play.

Biden noted that other options exist for altering the balance of the Supreme Court. (They include term limits, or rotating judges between courts).

He said he’s skeptical of simply adding new judges, as it would provoke continual battles over the court size.

“I have not been a fan of court-packing,” he said. But in one of his lengthier answers, involving racial inequity, Biden rattled off a series of numbers and planks from his platform.

He proposed tripling the funding for poorer schools so that they might offer teachers $60,000 salaries; he alluded to a stat that the ratio of school psychologists to students should be lowered from one per 1,400 students, to one per 500; he talked about business-administration loans and a $15,000 first-time homebuyers’ plan to help families accumulate wealth.

After that monologue, the town-hall moderator, ABC’s George Stephanopoulos, turned to the young audience member who asked the question: “Did you hear what you needed to hear?”

The young man said: “I think so.” Then Biden kept talking, and talked some more with audience members after the show was over, milling about and taking questions off the air. 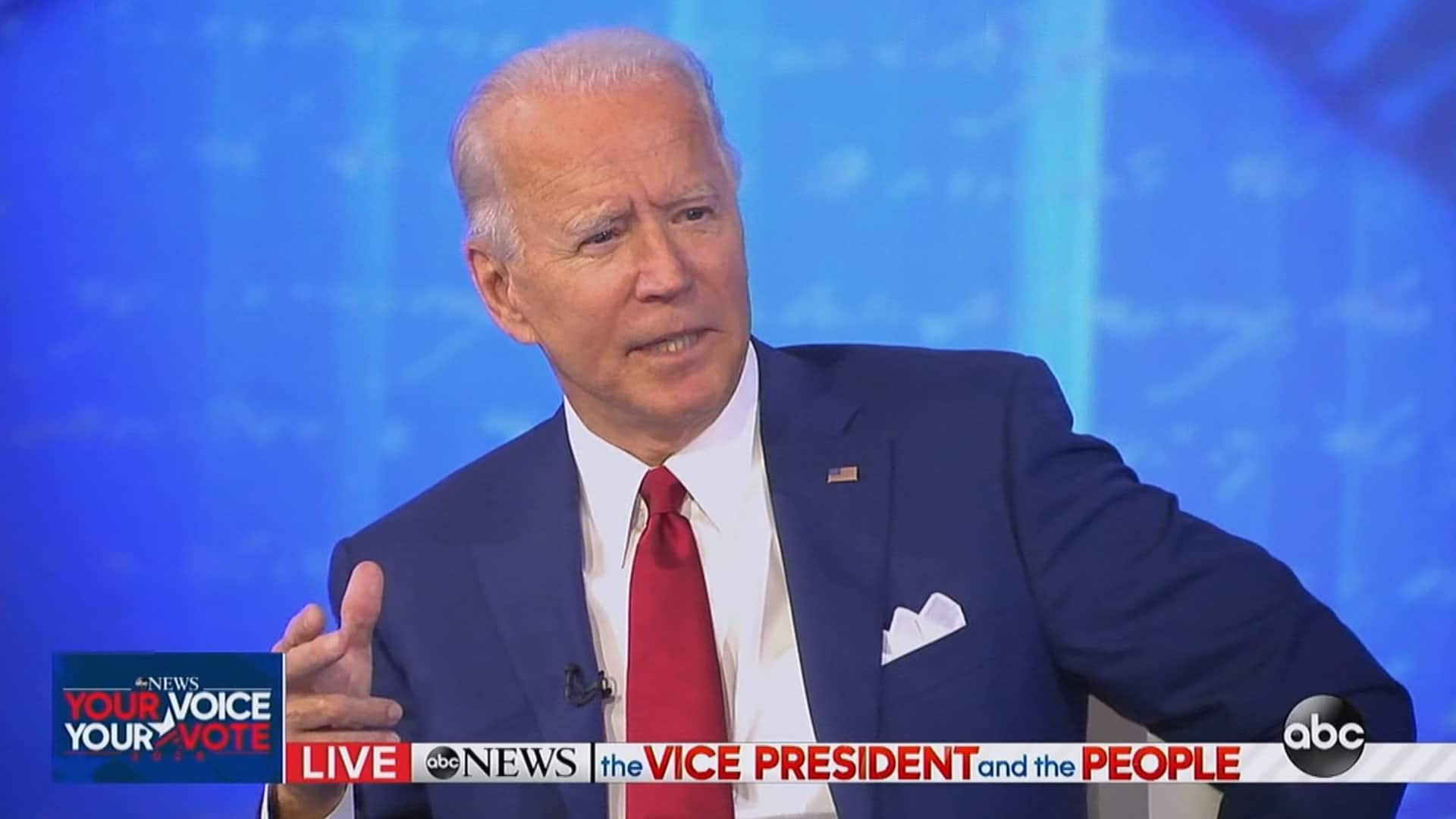 Joe Biden declined to say what, if any, action he would take if a conservative majority is cemented by Trump’s latest appointment to the Supreme Court.

Biden promised not to hold grudges against political opponents, and promised to govern for all Americans.

“In politics, grudges don’t work,” Biden said, calling insults a recipe for inaction in trying to pass laws on Capitol Hill. “You can’t get anywhere. Nothing happens.”

Trump was on another network, NBC.

The president cited fewer statistics, but did repeat amisinterpreted claim about the alleged danger of mask-wearing, which his own Centers For Disease Control said was wrong.

Trump was asked whether he would denounce the QAnon conspiracy theories.

The moderator, Savannah Guthrie, asked: “It is this theory that Democrats are a Satanic pedophile ring. And that you are the saviour. Can you just once and for all, state that is completely not true?”

Trump said he knew nothing about QAnon, then added: “I do know they are very much against pedophilia. They fight it very hard.” When asked whether he denounced white supremacy, a matter of some controversy in the first debate, Trump replied with annoyance.

“You always do this,” he told Guthrie.

Another chance to denounce white supremacy

NBC Town Hall moderator Savannah Guthrie asks Donald Trump if he will denounce white supremacy, suggesting he is often hesitant to do so.

He promised to have a plan soon for undocumented young migrants living in legal limbo and another to protect people with pre-existing medical conditions, if Obamacare gets struck down by the Supreme Court.

There is no plan yet.

Asked at the end why he deserves four more years, he mentioned the low unemployment, strong economic growth before the pandemic, stronger borders and increased military spending.

“Because I’ve done a great job,” he said.

Previous Looking for local appliance repair? Why you can’t always trust what you find on Google Maps
Next A major addition to gov’t highway building program